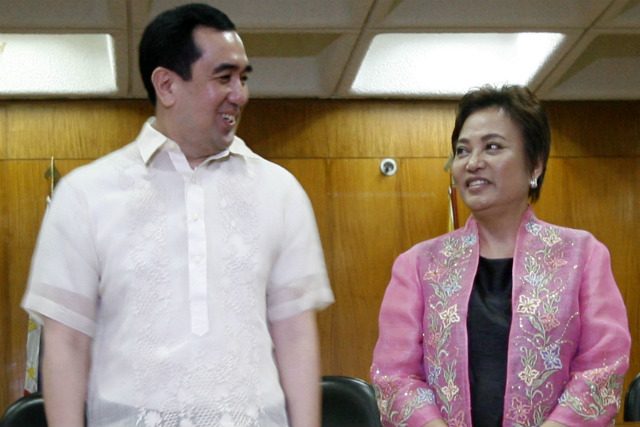 Guanzon also said she doubts if Bautista wants the Comelec to win against Poe, who leads presidential preference surveys, in the petitions she filed before the Supreme Court (SC).

The Comelec commissioner told Rappler: “It is Chair Bautista who is showing partisanship, not me. He voted in favor of Grace Poe; now he wants to shoot down our comment. And Grace Poe urged Bautista to probe the commissioners. Wow.”

Rappler reached Bautista for a reaction on Sunday, but the elections chief said he refuses “to comment any further.”

This comes after Bautista, in an internal memo, asked Guanzon and the head of the Comelec’s law department, Maria Norina Tangaro Casingal, to explain why they filed an unauthorized comment against Poe before the SC.

Earlier on Sunday, in a live radio interview with dzBB’s Nimfa Ravelo, Guanzon said, “E ano bang gusto niyang mangyari, matalo kami sa Supreme Court (SC)?” (And what does he want to happen, for us to lose in the Supreme Court?)

(What’s this? Isn’t it that the Commission on Elections shouldn’t be biased? We shouldn’t be siding with anyone. Why is it that my chair seems to forget this, and he is announcing to the whole world that I am wrong, that I am a stupid commissioner?)

She then referred to Bautista’s vote not to cancel Poe’s candidacy for president. Five of 7 members of the Comelec voted to bar Poe from running.

“Isang boto lang siya e. Lima kami, nanalo kami e. Talo siya e. Panig siya kay Grace Poe e,” Guanzon said. (He only had one vote. There were 5 of us, and we won. He lost. He is siding with Grace Poe.)

A Comelec insider, however, compared Guanzon with another Comelec commissioner thrust in a similar situation.

The other commissioner is lawyer Arthur Lim, who is in charge of drafting another Comelec comment against Poe before the SC.

The Comelec insider told Rappler that unlike Guanzon, Lim “is consulting with the entire en banc,” or the commission sitting as a whole, in drafting the comment assigned to him.

The Comelec en banc is set to discuss the comment drafted by Lim on Monday, January 11.

Guanzon said the comment prepared by Lim “is late” for filing. “It was also due January 7 but the commissioners were not satisfied with the draft of the law department. We will settle this issue tomorrow. The en banc rules. Not the chair,” she said.

Guanzon has denied this claim, and has stressed her role as a lawyer and women’s rights advocate in the Comelec.

She said on Sunday, “This is about Grace Poe. Stop talking about Mar Roxas.”

Poe’s campaign spokesman Valenzuela City Mayor Rex Gatchalian, for his part, criticized Guanzon for filing the comment against the senator before the SC. At the same time, he said their camp believes that “certain personalities in the Comelec have political agendas against Senator Poe.”

Gatchalian urged Bautista to investigate these personalities, but Guanzon said the chairman “has no power to do that and that would be seen by the public as a retaliation.” Noting that the Comelec is an independent constitutional commission, she added, “Politicians should respect the Constitution and our independence.”

Guanzon on Bautista: ‘How dare he’

In Sunday’s radio interview, Guanzon also slammed Bautista for issuing a memo, and requiring her to reply within 24 hours, despite his supposed lack of authority.

She said: “He has no power over me. He has no authority to discipline me. How dare he issue me a memorandum to reply to him in 24 hours. What does he think of me? His employee?”

Guanzon pointed out, too, that her legal team stayed in the Comelec main office until 3 am of Thursday, January 7, to work on the comment on Poe’s case.

She said her lawyers were even “trapped” inside the Comelec, and had to be assisted by guards to get out.

Refering to Bautista, she said, “And this is what you will do to repay us?”

Guanzon said: “Pagod na pagod na kaming mga commissioners kakatrabaho. Bakit hindi na lang si Chairman Bautista ang magtrabaho? Anong ginawa niya? Nagbakasyon. Nagbakasyon siya sa New Zealand.” (We commissioners have been so tired working. Why not have Chairman Bautista do all the work? What did he do? He took a vacation. He took a vacation in New Zealand.)

She said she didn’t want to delay Poe’s case because the Constitution ensures every person “the speedy administration of justice.”