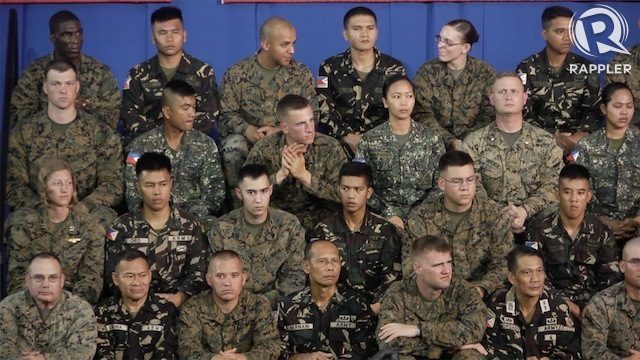 Facebook Twitter Copy URL
Copied
The senators, some of whom earlier signed a resolution that the PH-US military agreement needs Senate approval, now say they 'respect' the High Court's ruling

MANILA, Philippines – Nearly two years after the Philippines and the United States signed the Enhanced Defense Cooperation Agreement (EDCA), the Supreme Court finally decided in favor of the military deal on Tuesday, January 12.

Last November, 15 senators signed a resolution, stating that the deal was a treaty that required the approval of the Senate, and not just an executive agreement that Malacañang could enter into.

Now, senators who are running for higher posts in the May 2016 elections said they “respect” the SC ruling on the military agreement, which gives US troops wider access to Philippine bases.

The SC said in its decision that the EDCA is constitutional, and could be implemented under the existing Visiting Forces Agreement.

Here’s what the senators had to say:

Presidential bet Grace Poe
“As mentioned before, we are thankful to the SC for providing guidance in the EDCA issue. Their decision will serve as guide for all concerned. We call on all to respect the decision of the SC,” Poe’s spokesman Rex Gatchalian said in a statement.

Senator Francis Escudero
“I respect the decision of the Court and the Senate will abide by it.”

Senator Gregorio Honasan
“You cannot go higher than the Supreme Court. Basta masunod ‘yung due process, ma-apply ‘yung rule of law, at saka the Supreme Court is an institution, the highest court of the land that administers justice and makes the ruling on questions of law and questions of fact, including constitutionality. So I cannot go higher…I cannot express an opinion that would impact the ruling of the highest court of the land.”

Senator Ferdinand ‘Bongbong’ Marcos Jr
“The decision by the SC on the constitutionality of EDCA is one we accept. However, I stand by the sense of the Senate that it is a treaty that should be ratified by the Senate.”

Senator Antonio Trillanes IV
“The Supreme Court ruling validated my vote against the Senate resolution saying EDCA needed to be ratified by the Senate. But more importantly, our country can now optimize the security opportunities this agreement has given us.”

Malacañang, for its part, welcomed the High Court’s affirmative decision. After all, it earlier argued that EDCA is an executive agreement and not a treaty that requires approval of the Senate.

Palace Communications Secretary Herminio Coloma Jr reiterated the ruling would further “strengthen the strategic partnership” between the 2 countries, which is based on the long-standing Mutual Defense Treaty and the Visiting Forces Agreement.

He maintained the US would greatly help in the modernization program of the Philippine military. After all, the agreement is crucial to the country’s operations against China on the disputed West Philippine Sea. (READ: EDCA equips PH as China builds islands – ex-US admiral)

“Akin to test-driving a car as opposed to buying a system trying it out and finding out it is not working. By the time we purchase them, we are more than ready to utilize them,” Aquino said in a forum with foreign journalists in October.

Despite issues against the agreement, Aquino said the Philippines would aid the US in case they need logistical support in their operations in the contested waters. (READ: ‘Balancing of power,’ Aquino says of US ship in West PH Sea)

“If you have an ally from the opposite side of the world and we will not support it logistically, how would it make sense?” he said. – Rappler.com