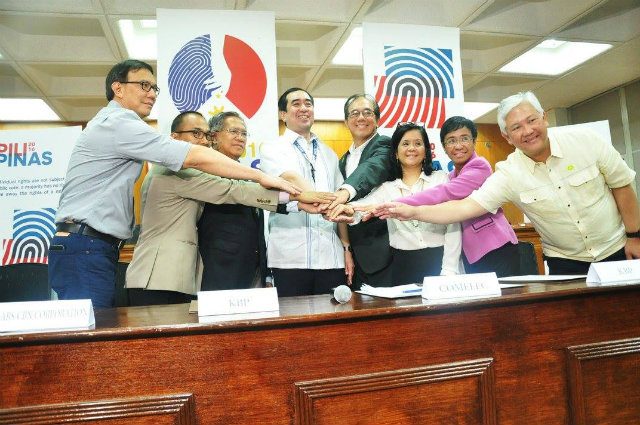 MANILA, Philippines – Rappler joined at least 8 other media organizations on Wednesday, January 13, in signing an agreement with the Commission on Elections (Comelec) to mount a series of presidential and vice-presidential debates.

This is for the Philippines’ national elections on May 9.

Rappler signed a memorandum of agreement (MOA) on Wednesday as partner of a lead network, Nine Media, which runs CNN Philippines. Rappler will work with CNN Philippines and BusinessMirror on the vice-presidential debate set on April 10.

In the MOA, the parties said the presidential and vice-presidential debates aim to help voters  “in making informed choices” on election day.

They also said the debates should “encourage candidates to focus on substantive issues and public policy pronouncements.”

The debates would serve as “a mechanism to exact accountability” from the politicians once elected, the parties added.

(We know Filipinos. I think we don’t like cowards. We don’t like people who don’t show up when they’re invited.)

The schedule of the presidential debates is as follows:

The schedule of the vice-presidential debate is on April 10, Sunday, 5-7 pm, in a university in Manila.

The following media outlets also signed the MOA on Wednesday: ABS-CBN and Manila Bulletin as partners; GMA-7 and Inquirer; Nine Media and BusinessMirror; and TV5 and the Philippine Star. – Rappler.com