In new Binay ad, the average Filipino is ‘nognog’ like him 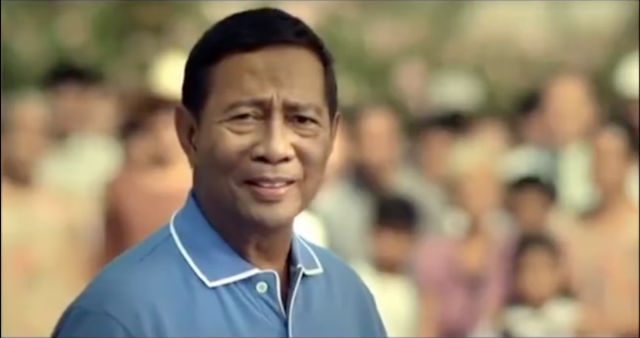 MANILA, Philippines – Vice President Jejomar Binay has launched a new political advertisement, saying the average Filipino is dark-skinned and short or “nognog” just like him.

The ad begins with a question, “Sino ba si Nognog? (Who is Nognog?)”

What follows is a montage explaining that “nognog” is every Filipino who labors under the sun, who endures studying in makeshift classrooms, and who has barely enough money to eat every day.

The ad also focuses on the plight of overseas Filipino workers (OFWs), a part of the voting population that Binay, former presidential adviser on OFWs, is currently wooing during his trip to the United Arab Emirates this week. (READ: The Leader I Want: Jejomar Binay’s to-fix list for 2016)

“Sino pa ba ang magtutulungan kundi tayo? (Who else will help us but ourselves?)” asks a smiling Binay towards the end of the video, with a throng of his supporters in the background.

Critics of the Vice President previously used “nognog” as a derogatory term for Binay, but the United Nationalist Alliance standard-bearer has since embraced the term to paint himself as an underdog who performs.

The term “nognog” is short for “sunog” or burnt, a reference to a dark, short, with curly hair and a stubby nosed comic character created by L.S. Martinez in the 1970s. The comics story was made into a movie in 1980 with then child star Niño Muhlach in the lead role.

The Binay ad is also consistent with the Vice President’s long-standing message that what he has already done in Makati, where he was mayor for 21 years, is what other politicians are only starting to promise to the voters.

Things are currently looking bright for Binay, who topped the latest Pulse Asia survey at 33% despite a string of corruption charges and allegations of unexplained wealth. – Rappler.com