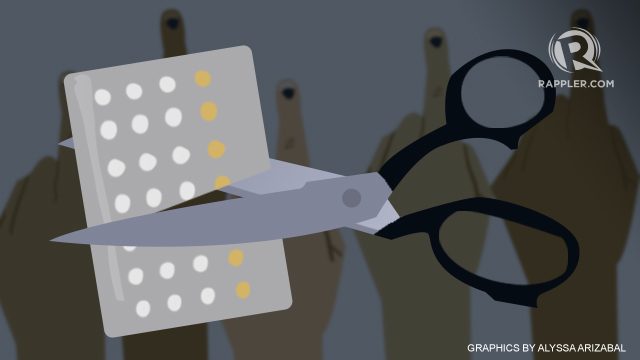 Facebook Twitter Copy URL
Copied
RH advocates believe the budget cut is now water under the bridge, but they can fight back with their 'most important weapon': their votes

MANILA, Philippines – With 4 months left before the 2016 presidential elections, former and current lawmakers as well as reproductive health (RH) advocates want the removal of the P1-billion allocation for contraceptives in the 2016 budget to be an election issue.

Senator Pia Cayetano on Thursday, January 14, said she is interested to know what her colleagues in the Senate, especially those seeking higher office in the 2016 elections, think of the budget cut.

“We have in our Senate presidentiables [and] vice presidentiables. I think this is an issue that they should take up because this, number one, is a women’s issue. I want to hear what their positions are on this,” Cayetano said Thursday in an interview on ANC’s Headstart.

She added: “If one of them becomes president and vice president, how do you deal with a Congress that is not transparent with their own colleagues?” (READ: What happened to the 2016 budget for contraceptives?)

Meanwhile, Senators Grace Poe and Miriam Defensor-Santiago are both in running for president.

On Thursday, Cayetano – principal sponsor of the RH law – slammed Senator Loren Legarda, chair of the Senate committee on finance, as being responsible for “covering up” the budget cut.

“It was a cover-up. There was no intention to disclose that information. It’s P1 billion of a fund that is covered by law…. Reproductive health, along with probably a few others, has a law that requires that you fund it, and you took it out? That’s why it’s illegal. You basically refuse to fund a project, a program that was created by law,” Cayetano said in a separate press conference on Thursday.

Without naming names, she said the people who made the decision to remove the P1 billion “do not agree with reproductive health, they decided to take it out.”

She questioned, however, whether Legarda is really an RH supporter.

But in an earlier statement, Legarda said a cut in the budget “does not mean less support for a program.” (READ: DOH to source P337.5M for contraceptives from 2015 budget)

They believe the budget cut is now water under the bridge, but they can fight back with their “most important weapon”: their votes. (READ: Advocates on RH budget cut: ‘We’ve let our guard down’)

“Para sa mga kababaihan at mga pamilya sa Pilipinas (For Filipino women and families), it’s time to stand up for your rights. Stop being victims and take your destiny into your hands…. May 9 will soon be upon us – don’t vote and campaign for others not to vote for those who continue to subvert your RH rights,” said former health secretary Esperanza Cabral, chair of the National Implementation Team of the RH law.

“It is true that we get the government we deserve, and if we keep voting for jerks and bigots into office, we will have nobody to blame but ourselves.”

Lagman said they may not be able to file a case against the lawmakers responsible for the inadequate funding, but their best solution will be the May elections.

“Baka meron pang iba [other than Sotto] (There could be other candidates other than Sotto),” Lagman answered back. Sotto is seeking reelection and continues to lead the senatorial preference surveys.

Shahani, meanwhile, said not only the budget cut, but even family planning and women’s health should be made an election issue. – Rappler.com