Duterte to businessmen: Davao City is my Exhibit A 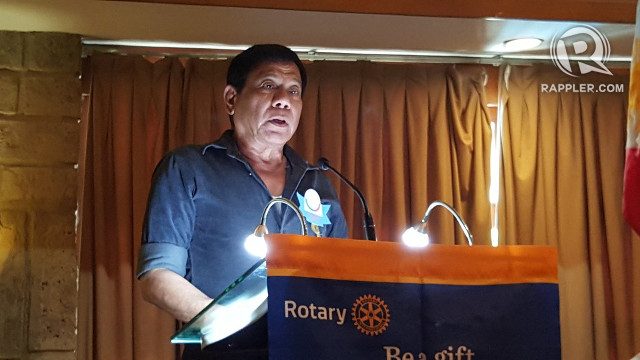 Members of Rotary Club Manila listened to the Davao City mayor explain how his platform – centered on fighting crime, corruption, and red tape in government – will help bring prosperity and progress to the Philippines. (READ: Duterte, Cayetano platform focuses on crime, economy)

“Before a city or province can really prosper, you have to establish order. So that the investors would be coming in, comfortable in their thoughts that there would be no corruption, that they are safe, and that their businesses will prosper,” said the presidential candidate.

Duterte speaks to businessmen in Makati at the Rotary Club of Manila. #PHVote

His experience at the helm of Davao City for 22 years shows that peace and order is the foundation of any progressive economy.

During his mayorship, Davao City has consistently ranked high in “most competitive” city indices and has been named one of the “Top 20 Most Liveable Cities in Asia.”

But cities in Mindanao cannot have a chance to progress if crime and terrorism are not dealt with. As mayor of a major Mindanao city, he has experienced bombings and kidnappings by rebel groups that endanger businesses, investments, and ultimately, the economy.

“Had I not been very strict in Davao City, it wouldn’t be as it is now. I have to say you guys, there in Mindanao, stop so we can invite the investors to develop…but if there is always a taxation of the NPAs and the employees are kidnapped, we could not expect a good investment to come in,” he said.

But he emphasized that he would not declare Martial Law to demonstrate a “strongman” type of rule.

“We have had a taste of that and it was disastrous. I would just be a hardliner in crime, and I have promised the people, if elected, that I would stop it, suppress it – drugs, crime and corruption.”

He reiterated his vow not to use extra-judicial killing as a way to crack down on criminals.

His pitch to make Mindanao safe for investments and development ties in with the needs of Metro Manila, he explained. (READ: Duterte reveals plan to solve Metro Manila transpo woes)

Endless traffic jams, airports and seaports operating beyond capacity are threats to Metro Manila’s own progress. The only solution is to decongest Metro Manila by developing other parts of the country, he said.

“The entire Metro Manila is really, really overloaded. You have to disperse the program. And you have to build the industries in Mindanao,” he explained.

If elected for president, Duterte said he would focus on building good infrastructure, including airports and seaports big enough to accommodate the needs of the economy. As for public transportation, he would add more trains and carriages.

Metro Manila won’t be the only beneficiary of improved public transportation. He would also prioritize a railway system for Mindanao.

Duterte emphasized his war against red tape – a bane of businessmen.

The usual complaint of businessmen, he said, is that the release of government permits often take months or years, thereby delaying their plans and costing them money.

“That’s what investors don’t like. I’ll just give you 60 days. Act on the papers, 60 days. If you complete action on the papers in 72 days, you cannot release the paper anymore just like [in] Davao [City]. You have to forward it to the executive secretary and he will ask you why it took several days,” he said.

In Davao City, processing of government documents is limited to 72 hours. Any delays have to be explained to the Office of the Mayor.

He said he would also get rid of any redundancies in government offices, reconfiguring the system so that only 5 or 7 signatures are required for a permit to be issued.

But aside from explaining his investor-friendly plans, he asked the businessmen present to consider his intention to phase out contractualization.

While he assured them it would be done gradually, he called contractualization an inherently unfair practice.

“You destroy the skilled laborer. For you do not allow the Filipinos to acquire the skills…If you hire the guy once, twice and then thrice, it’s not good, it is not fair,” he told his audience.

Because of the Herrera Law, big companies in the Philippines are allowed to hire employees on a 6-month, contractual basis.

But labor rights advocates condemn the law for not providing necessary benefits for contractual workers.

Duterte’s speech was met with applause and laughter. As usual, his explanation of his platform was peppered with stories and jokes.

Bediones, a former president of the club, agreed with Duterte that peace and order helps improve the business environment.

“If you lower the crime rate, definitely business will come in, especially from abroad. So I think if he solves the problem, criminality and drugs, we’re going to go places.” – Rappler.com