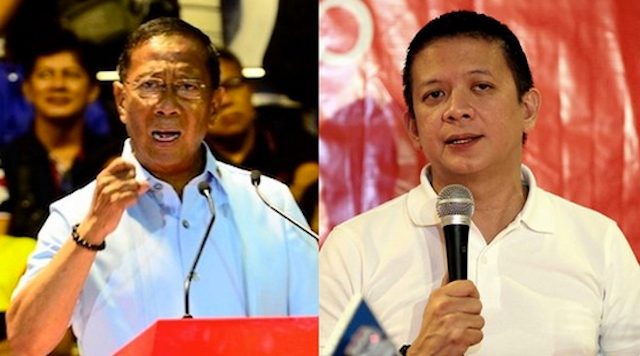 MANILA, Philippines (UPDATED) – Vice President Jejomar Binay and Senator Francis “Chiz” Escudero would be the winning tandem if elections were held in early January, according to results of the latest Social Weather Stations (SWS) pre-election survey released on Friday, January 15.

The results of the BusinessWorld-SWS January 2016 Pre-Election Survey, first published in BusinessWorld, showed voters’ preference for Binay rising to 31% in January, from 26% in December.

As of January 10, 2% of voters are undecided on their choice for president and vice president. Among vice presidential aspirants, Senator Francis Escudero led the pack with 28%, 2 percentage points lower than in December, but the biggest gainer during the polling period was Senator Ferdinand “Bongbong” Marcos Jr with 25% from 19% in December, a 6-percentage point increase.

The voters were asked who among those in the list provided to them they would vote for, if elections were held on the day they were polled. “The area estimates were weighted by the 2015 Commission on Elections data on registered voters to obtain the national estimates,” the pollster said.

The Binay camp said the latest poll results would encourage the Vice President “to work harder in order to demonstrate his actions to uplift our people’s lives, fight poverty and provide employment.” (READ: Binay’s strategy of silence)

“He will continue to emphasize that our country needs an experienced and competent leader to work for inclusive growth that would ultimately benefit the poor who comprise majority of our country,” said Binay spokesperson Rico Quicho.

Poe, who used to be the poll front runner, said the latest figures provide “an impetus to remain steadfast in my work and to continue reaching out to people to let them know about my platform and plans.”

“I also urge my supporters to help me spread the word that I remain a candidate for President in the upcoming elections and I am ready to serve the people,” she said.

The senator was apparently referring to anecdotal information that some of her supporters had switched to other candidates, thinking she had been disqualified from the race.

From the last survey period conducted from December 12 to 14, 2015, to the latest round of polls, among the dominant issues were the disqualification cases against Poe and Duterte, and the exchange between Roxas and the Davao mayor, sparked by the latter’s allegation that Roxas is not a Wharton graduate.

The administration coalition said that the rise of Binay in the latest survey is “not very surprising” as he has been “campaigning” since he became Vice President.

(The results are not really surprising. As soon as Binay assumed as VP, he campaigned for the presidency. In the past months, he spent P700 million on ads, and until now, he has not declared where this was sources. Is it from the parking lot, the school, Boy Scouts, or the hospital?)

He was referring to the corruption allegations against Binay made at the Senate probe into various alleged anomalous Makati City projects when he was mayor, including the Makati City Hall Parking Building II.

The Boy Scouts of the Philippines deal with Alphaland was also the subject of a Senate inquiry. (READ: Did Binay use Boy Scout funds for 2010 bid?)

“Gaya ng lagi naming sinasabi (Like what we always say), the real survey is in May,” he added. – Rappler.com