Duterte: Roxas most incompetent Filipino to run for president 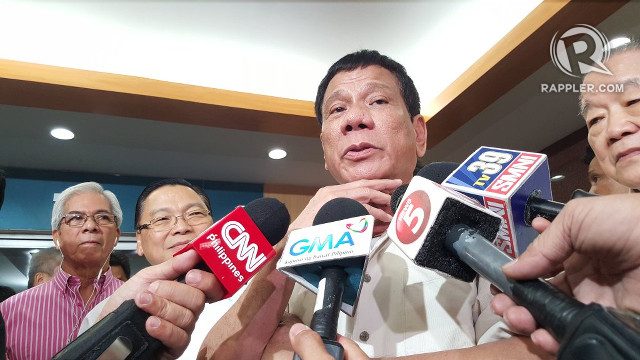 This time, the Davao City mayor called the administration standard-bearer and former Interior Secretary the “most incompetent Filipino ever to aspire for the presidency.”

His tirade, unleashed before he spoke in front of Filipino-Chinese businessmen in Binondo, Manila, was prompted by a reporter telling him that Roxas was again casting doubt on Davao City’s reputation as among the safest cities in the Philippines.

“Mar, he’s relatively new. I’ve been a mayor of Davao City for 22 years. I have consistently won the most peaceful city, the best police department,” Duterte told reporters.

Duterte added that Roxas’ statements questioning the achievements of Davao City “confuses” him because in September, Roxas himself conferred an award on the city.

“A month earlier, before the [filing] of candidacy, he gave me a plaque of recognition, an award, for the city of Davao, the best police department,” said Duterte.

Roxas’ signature is on a Seal of Good Local Governance plaque given to the city in 2015. In June and September that year, the Davao City Police Office was also recognized as “outstanding” while its anti-illegal drugs task force was named the country’s best.

Duterte contrasted his achievements to Roxas’.

“He was there from one position, DTI (Department of Trade and Industry), then during the time of Estrada, he was there. It made no difference to our country. In Arroyo’s time, he made not even a dent. And during the Aquino [administration], he was irrelevant,” said Duterte.

The ghost of Yolanda

The mayor also brought up Roxas’ performance during the immediate aftermath of Super Typhoon Yolanda (Haiyan).

Duterte recalled seeing Roxas in a police station in Leyte, meeting with Social Welfare and Development Secretary Dinky Soliman and other officials while, supposedly, 3 corpses of police officers were rotting near the gate outside.

To the mayor, this spelled out Roxas’ lack of leadership at a time when he was the highest-ranking government official in a disaster area.

“He could not have had an accurate reading of what was really happening because he was there inside. Hindi ka maglilibot (You won’t make the rounds outside). He is the most incompetent Filipino ever to aspire for the presidency,” he concluded.

Yolanda relief operations and rehabilitation have always been a sticky issue for Roxas and the entire Aquino administration. The government has been criticized by both local and international organizations and media outlets for the slow pace of operations and lack of clarity on leadership.

But experts also tame the blow, saying Yolanda’s scale was unprecedented and no government could have been thoroughly prepared for it.

In response to such criticism, Roxas’ camp says it was his leadership that enabled the restoration of communications in Yolanda-hit areas within a week. Clean-up operations supervised by Roxas also allowed relief goods to finally reach typhoon survivors.

Duterte’s statements are the latest in the word war between the two presidential candidates.

Duterte said it began when a journalist, supposedly under the direction of Roxas’ camp, spread a rumor that he had throat cancer.

That pushed the mayor to question Roxas’ diploma from the University of Pennsylvania’s Wharton School. (READ: Wharton a ‘myth?’ Facts on Mar Roxas and his economics degree)

The two have challenged each other to slap fests, fist-fights, and even a gun duel.

In the most recent voter preference survey, Roxas and Duterte were neck-to-neck – statistically tied at 3rd place. – Rappler.com