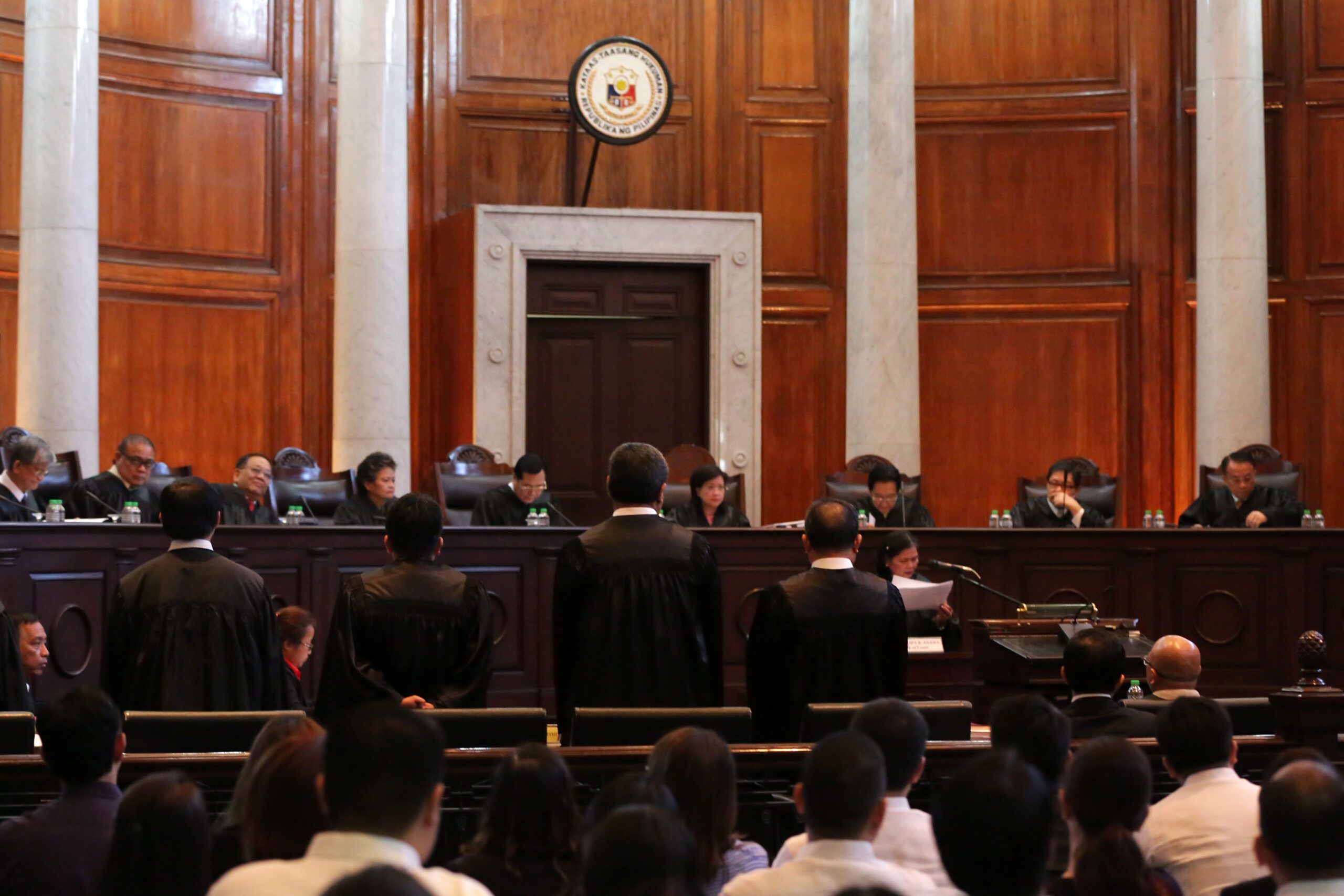 Facebook Twitter Copy URL
Copied
(UPDATED) 'We have to be careful that we are not, by a rigid reading of what we consider a failure to enumerate foundlings, we are going to create unintended consequences,' says the Chief Justice

MANILA, Philippines (UPDATED) – Chief Justice Maria Lourdes Sereno asked the camp of Senator Grace Poe to show the possible implications of her case before the Supreme Court on foundling rights.

During her interpellation on Tuesday, January 26, Sereno asked Poe’s counsel Alex Poblador, to “find some limitations” in the Ching Leng vs Galang case cited by their camp in relation to foundlings.

“We have to be careful that we are not, by a rigid reading of what we consider a failure to enumerate foundlings, we are going to create unintended consequences, the difficulties of which is not even going to just be visited on your client but on so many foundlings in this country,” the Chief Justice told Poblador.

In the Ching Leng vs Galang case, Sereno said the Court ruled that “adoption [of alien children] does not include reacquisition of nationality of adopter.”

“With respect to the alien children of [the naturalized] Filipino, the citizenship is not immediately transmitted to children,” she explained.

But Poblador said Poe’s case is different since she went through an adoption process on the basis of a foundling certificate.

The SC heard oral arguments for the second day on the consolidated petitions filed by Poe, who is seeking a reversal of the Commission on Elections decision to cancel her certificate of candidacy for president in the 2016 elections.

On adoption of foundlings

“Meaning, foundlings are covered by rules of adoption of Filipino children. What do you see from that?” Sereno asked Poblador, referring to RA 8552.

“That could only mean that under this law, a foundling is considered a Filipino, otherwise the court cannot decree their adoption,” Poblador answered.

Sereno also pointed out that foundlings fall under the coverage of RA 8043. She asked Poblador if there is “something we can conclude by way of legislative interpretation of Constitution.”

“Same conclusion, the legislature itself accords foundlings the presumption of citizenship,” the lawyer answered.

Sereno said if the Court extends the doctrine in the Ching Leng vs Galang case to refer to “all adoption situations,” it will be contrary to Article 15 of the Civil Code:

Laws relating to family rights and duties, or to the status, condition and legal capacity of persons are binding upon citizens of the Philippines, even though living abroad.

“So can you try to find out, in fact, if the Court makes a conclusion against foundlings who are being adopted, what do you think will be the possible policy implications that will result in the desirability of adopting foundlings vis-a-vis those with known biological parents?” asked the Chief Justice.

“No one will adopt foundlings because of the possibility that the decree of adoption can be challenged on the ground of lack of jurisdiction on the part of the court,” Poblador answered.

This will have an implication on the adoption process, Poblador pointed out, as foundlings will remain in “orphanages and public institutions.”

Sereno then noted that “if we rule completely against foundling rights…. the foundling will be discriminated against from the time [he or she] is found.” Poblador noted that this will result to falsification in reporting of births.

“The adoption also, will there be disincentive to the adoption of foundlings? Will there be now a question always as to this status of this children? Is that a situation that the Constitution envisions should result from our decision?” Sereno asked Poblador, who answered no.

‘Not a vox populi requirement’

Sereno said the implication of Poe’s case is “very profound” not only on the presidential candidate but also on foundling rights. (READ: Foundlings not natural-born? ‘A step backward’ for children’s rights)

“I’m very interested because more and more parents who want to adopt, and many times they don’t understand the kind of legal problems they are going encounter,” she said.

She also pointed out that their duty to make sure justice prevails is “not a vox populi requirement” but one that is required of justices in keeping with their mandate, even “in the face of silence of obscurity or ambiguity of law.” (READ: Chief Justice Sereno: We have rich domestic law on foundlings)

“What this court will say will speak to [the parents]. They will make the decision matrix depending on how we view our constitutional duty to be, whether we find it by saying the language is silent so rights of foundlings are completely silent, or it will go through a situation where it will resort to interpretation in accordance with not only statutory construction, but also judicial interpretation and also administrative practices in order [for] a just and right ruling will result.”

In a statement on Wednesday, January 27, Grace Poe said Sereno’s emphasis on adoption laws that cover foundlings “shows a lot of compassion and justness for foundlings like me.”

“It conveys the message that there are laws and jurisprudence that foundlings can rely on in pursuing their case, and this certainly buoys up the argument raised by my lawyer during the oral argument,” she added.

The oral arguments will again resume next Tuesday, February 2. – Rappler.com