Jan 29, 2016 8:00 AM PHT
Pia Ranada
Facebook Twitter Copy URL
Copied
The latest television ad of the tandem says those discrediting them are enemies of the change they want to bring to the country 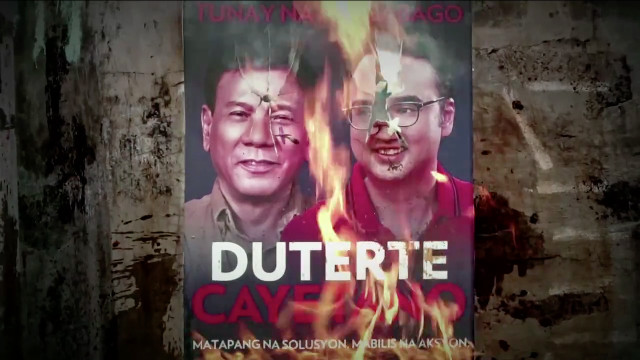 The 30-second video begins with a poster of the two politicians being trashed, burned, and shot at to symbolize efforts of those who “oppose change.”

These hostile forces, according to a voice-over, are those benefiting from the supposedly messy system of governance.

(True change is coming and peace in our surroundings, order in government, and prosperity will return.)

The phrase “Tunay na pagbabago” or “True change” is the tagline of the Duterte and Cayetano tandem. Through their platform, they’ve made a promise to quash crime and corruption and spread development throughout the Philippines.

The night before, a shorter political ad featuring only Duterte was aired on national television. Another Duterte ad was uploaded on Youtube Wednesday night.

Both Duterte videos were devoid of images of the Davao City mayor. They focused on the anti-crime aspect of his campaign. (READ: How do you handle a candidate like Rodrigo Duterte?)

According to a source, this latest tandem political ad was financed by a Duterte and Cayetano supporter from Manila. – Rappler.com