Laguna youth on #PHVote: ‘We will not sell our vote’ Facebook Twitter Copy URL
Copied
Students from Laguna province take the #PHVote Challenge, promising that they will choose the right leaders in the coming elections

LAGUNA, Philippines – More than 2,000 Laguna youth took the #PHVote Challenge on Monday, February 1, at the Laguna State Polytechnic University (LSPU) – Siniloan Campus, vowing that they will vote wisely in the upcoming elections.

Rappler CEO and Executive Editor Maria Ressa challenged the students to use the power they by choosing the right leaders.

“You have so much power in your hands. You have the opportunity to change the country. Will you change it?” Ressa said, emphasizing that social media is a powerful tool to amplify people’s voices.

“Do not sell your vote because when you do, you are selling our future,” Ressa added.

This challenge was met with an overwhelming response from the audience and netizens.

Ressa also gave tips on how the students can choose the leader the country deserves.

“Know where you are, organize, then evangelize. If you’re active on social media, can you make a difference? What we’ve seen in Rappler is yes. It is the fact that you’re engaged and that you care that makes a difference,” Ressa said.

Promoting a culture of preparedness

Meanwhile, speaking about his long experience in covering disasters, MovePH Executive Director Rupert Ambil emphasized how climate change is a national concern and that it should be taken seriously.

“When I started my career in media, the strongest typhoon category was 3. Now, we have category 5 typhoons almost every year. Disasters affect our way of life so much,” Ambil said. 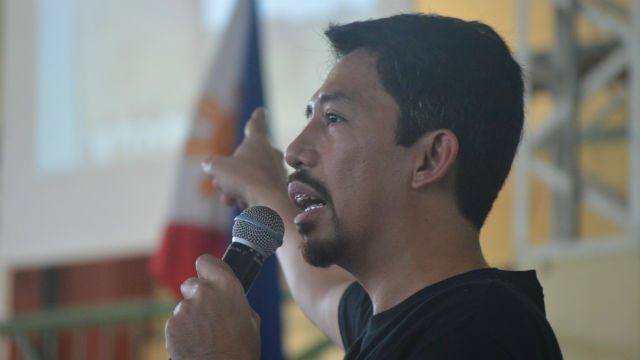 Laguna is prone to flooding due to the nearby Laguna de Bay. In December 2015, Tropical Depression Onyok inundated Southern Luzon, leaving the LSPU-Siniloan flooded.

“We advocate for information-sharing because we’ve seen how it can save lives. We want you to always be informed and ready,” Ambil added.

Minerva Cabiles, Child Rights Director of Save the Children (STC), also discussed how hunger and malnutrition among children should be a key election issue.

“Hunger and malnutrition should be prioritized because they will have a great impact not only on children but also on our economy as a whole. It is not enough for politicians to say that they support a program or an issue. We need to find out whether they will allocate budget to fund it,” Cabiles said. Data obtained from STC showed that 1 in 3 Filipino children suffer from chronic malnutrition.

The country also ranked 2nd in Southeast Asia and among the top 10 with most number of stunted children.

Cabiles also added the importance of providing solutions to children affected by disasters and violence.

“How do we vote wisely? Let’s not be content with motherhood statements,” she stressed.

Ambil summed up the program by asking the students to take the #PHVote Challenge journey seriously. He told the students how social media engagement can be used to push for social good using the story of Daniel Cabrera.

“We took everything we learned in journalism and community engagement and we put it in this challenge. Participate, educate yourself, filter all the information and educate others – this is what we challenge you to do,” Ambil said.

The participants also shared their sentiments on social media.

Must: Do not sell your vote!! #PHVote #PHVoteLaguna