MANILA, Philippines – Presidential aspirant Senator Grace Poe maintained her lead over other presidential bets in the recent Laylo survey, which was conducted for The Standard and published on Tuesday, February 9 – the start of the campaign period. 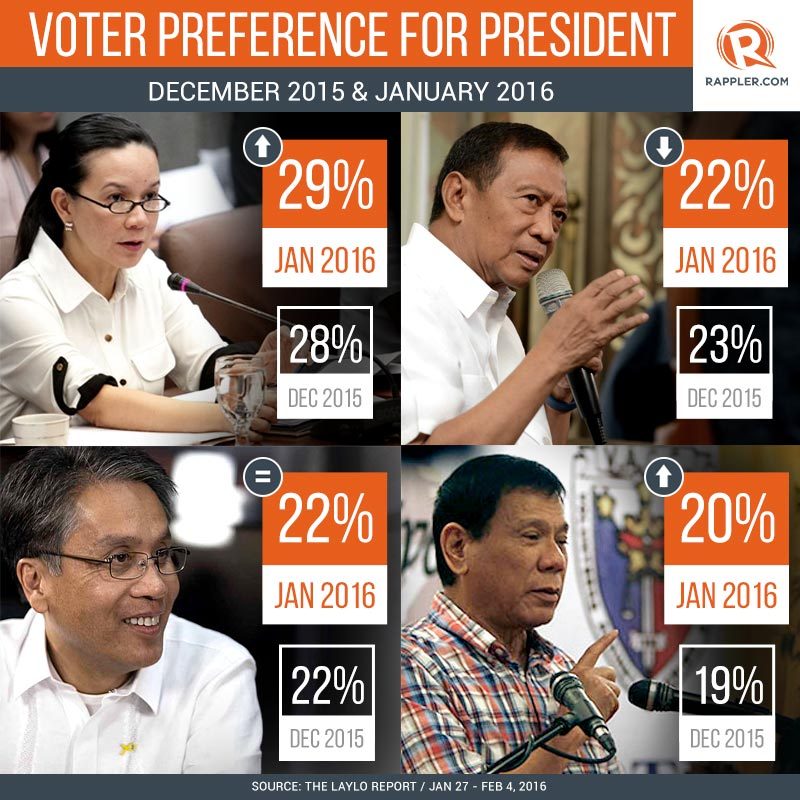 The survey was conducted from January 27 to February 4, a month after the Supreme Court stopped the Commission on Elections from cancelling Poe’s certificate of candidacy over questions on her citizenship and residency.

Results showed that Poe got 29%, a 1% increase from her December rating, also in the survey conducted by Laylo Research Strategies.

Poe’s spokesman Valenzuela Mayor Rex Gatchalian welcomed the positive news. Despite issues, Gatchalian said, the public saw through the “black propaganda” by her rivals and the “confusion-setting disqualification cases.”

“Senator Poe is very thankful for the continued support and trust of the Filipino public. We will continue to clarify to those who are still asking that Senator Poe continues to be a candidate for the presidency. With this two-pronged approach, we believe we can further solidify her standing with our voters,” Gatchalian told Rappler.

Poe led in Metro Manila and the rest of Luzon – similar to the findings of the January Pulse Asia elections survey.

Roxas remained the top choice in the Visayas, and Duterte in Mindanao. The two hail from those respective island groups.

The recent Pulse Asia survey showed Poe regaining her lead, after her numbers suffered earlier due to the disqualification cases filed against her. In an attempt to address it, Poe released a political advertisement telling voters she remains a candidate in the May 2016 elections. The Laylo national survey was conducted among 3,000 registered voters and has a margin of error of +/-1.8%. – Rappler.com