Miriam to Ilocanos: If something happens to me, Marcos to take charge It’s their first appearance together as a tandem. Santiago, who is battling cancer, has not been out of Metro Manila, limiting her sorties to forums in the capital.

“If I’m elected president and something happens to me, we want someone young and idealistic to replace me,” Santiago said before a cheering crowd at the Imelda Cultural Center here, referring to Marcos.

The ailing Santiago spoke for just a few minutes. She vowed to jail the corrupt once elected – an irony given that the Marcoses were driven out 30 years ago in a people power revolt due to charges of massive corruption. “They can choose between a standard jail or deluxe jail,” she said.

Marcos earlier told the crowd that he chose Santiago to be his standard-bearer because they’ve been “deskmates” in the Senate. “The one I learned from our candidate is meritocracy: the recognition of excellence,” Marcos said. 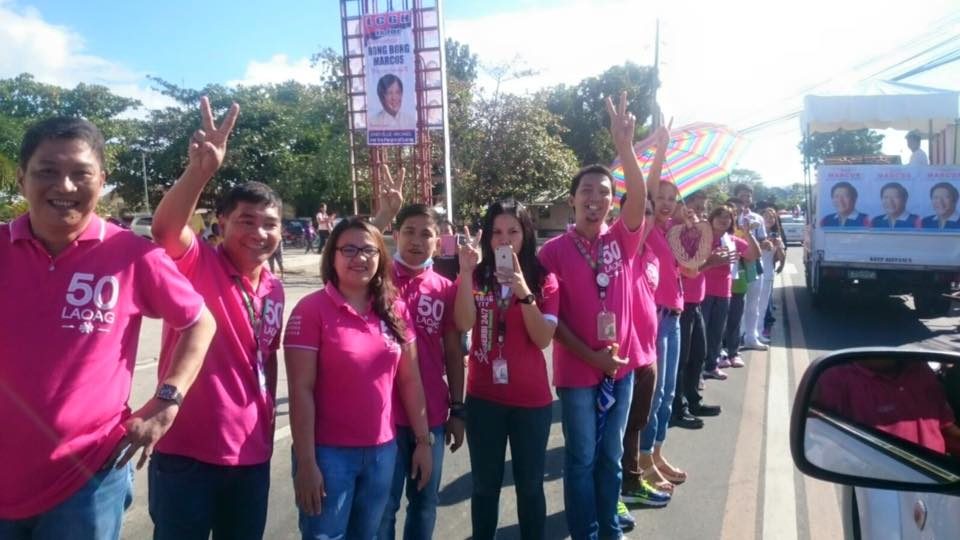 He also asked Ilocanos to “get rid” of their regionalistic mentality for these elections. “Balikan natin ang ating pag-iisip ng nationalismo,” he said. (Let’s revive nationalism.)

Marcos is running 2nd in the latest survey on preferences for vice presidential bets. The Marcos family is banking on the so-called Solid North to deliver the votes for him on election day.

In his speech, Marcos acknowledged that he learned his leadership skills from his mother, Ilocos Norte Representative Imelda Marcos, and his late father, Ferdinand Marcos.

“Walang iwanan sa darating na halalan,” Marcos told the crowd. “Agbiag, Ilocos Norte!” (No one will be left behind in this election. Long live, Ilocos Norte!) – with reports from Patty Pasion in Batac/Rappler.com