Binay: ‘This is the eve of our freedom from poverty’ 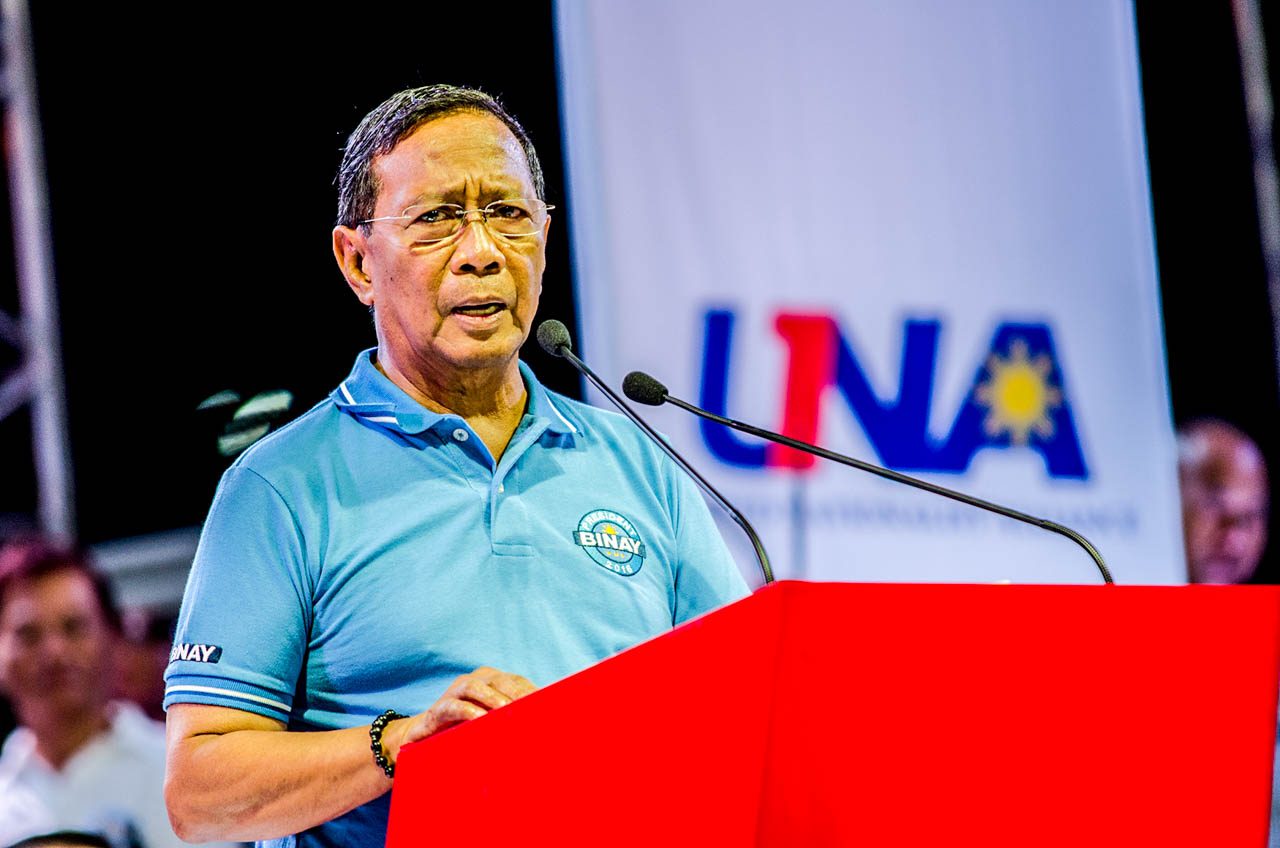 MANILA, Philippines – As he faced thousands of supporters at an urban poor area in Mandaluyong City on Tuesday, February 9, Vice President Jejomar Binay  vowed to provide them the life they were promised when the Aquino administration took office 6 years ago.

Binay made the pledge at the United Nationalist Alliance (UNA) proclamation rally at the Welfareville compound, along with other promises meant to provide the quality of life and prosperity that, he said, the Aquino administration had vowed but failed to deliver in its nearly 6 years in office. (FULL TEXT: Jejomar Binay: ‘Bukas, ginhawa sa bawat pamilyang Pilipino’)

(Relish this night, my fellow citizens. This is the eve of our freedom from poverty and unemployment, insufficient and slow service, incompetent and insensitive governance, and pointless black propaganda, righteousness, and vengeful politics and bickering.)

For starters, he vowed to end the income tax payment of workers earning a maximum of P30,000 ($630.38) per month, if elected president.

The proposal is not unique to Binay. Davao City Mayor Rodrigo Duterte had earlier promised that if he is elected president, those earning less than P20,000 will not get taxed.

Binay had a ready answer to critics of the proposal, which the Vice President made alongside pledges to widen social services that would require increased government funds.

(To those who say this cannot be done as the government would incur significant losses, my response is simple: billions are lost to smuggling. Billions are lost due to inefficient tax collection. Billions are wasted because of improper government spending. That must be addressed, instead of adding to the sufferings of the Filipino workers.) Binay, who was Makati mayor for 21 years, again promised to replicate what he had done in Makati to the rest of the country if elected president, by expanding social services in his first year in office. (READ: Binay in Mindanao: I will make you rich, like Makati)

“Sa gabing ito, inuulit ko ang lagi kong sinasabi sa ating mga kababayan sa mga probinsiya: ang nagawa namin sa Makati, gagawin natin sa Pilipinas (Tonight, let me repeat what I’ve been saying to our people in the provinces: what we did in Makati, we will do for the entire Philippines),” he said.

He cited 4 programs that have to be carried out in his first year as president, among them, to provide free medicine to all poor Filipinos.

The Vice President, who resigned from the Aquino Cabinet last year because of its supposed inefficiency, promised to continue and improve on the administration’s Pantawid Pamilyang Pilipino Program (4Ps).

He added that his administration will “clean up” the program to ensure that the distribution of the fund is not marred by politicking.

Binay’s choice of Welfareville to launch his campaign is consistent with his platform of pro-poor governance and inclusive growth. His key campaign message builds on his rags-to-riches story as an orphan who became a human rights lawyer, and later vice president. (READ: The Leader I Want: Jejomar Binay’s to-fix list for 2016) 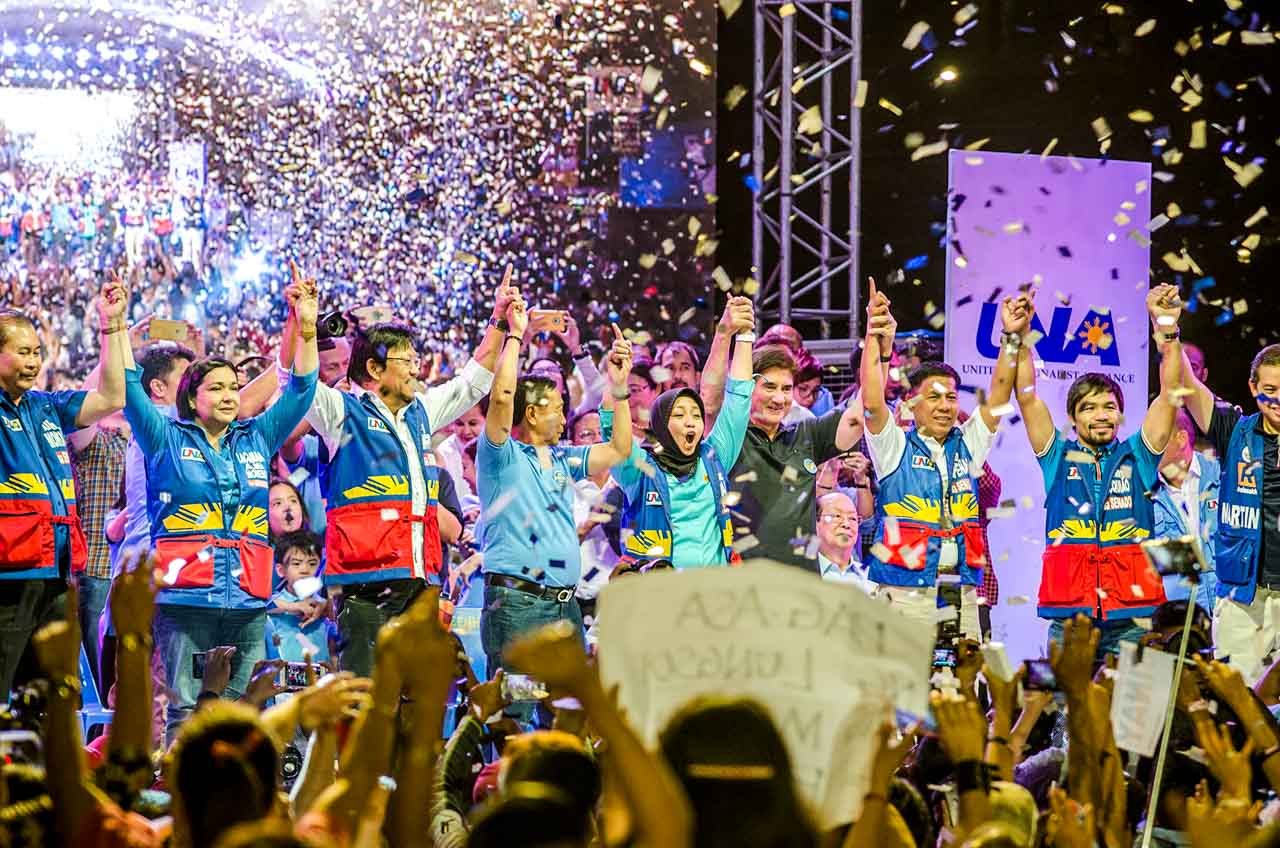 Former president now Manila Mayor Joseph Estrada was not seen at the UNA rally, reminiscent of his absence at the launch of UNA as a political party last year.  (READ: Erap snubs Binay’s UNA launch)

Asked before the event whether Estrada was attending the UNA proclamation rally, Navotas Representative Toby Tiangco, UNA president, said he was not aware of it.

Binay was Estrada’s running mate in the 2010 presidential elections. Binay won but Estrada lost to then Senator Benigno Aquino III.

Estrada has repeatedly said that he was torn between supporting Binay or presidential aspirant Senator Grace Poe, the daughter of his best friend, the late Fernando Poe Jr.

Poe is the current front runner in the presidential polls once dominated by Binay, who has slipped to second place. The Vice President is hounded by corruption allegations that were the subject of a year-long Senate inquiry that ended in January. – Rappler.com