Visibly weak Miriam Santiago shows up with pick up lines BATAC, Philippines – She’s back with her pick up lines that have made her a social media star. But presidential aspirant Senator Miriam Defensor-Santiago looked and sounded weak in the short time that she campaigned here on Tuesday, February 9.

Santiago, who was diagnosed with lung cancer in 2014, is running for president with Senator Ferdinand “Bongbong” Marcos Jr. (READ: Will voters go for ill candidates like Miriam Santiago?)

Their proclamation rally here is her first sortie, but she defended her long silence by slamming the other candidates for premature campaigning. The official campaign period for national candidates, after all, just began Tuesday.

“Look at our politicians. According to the law, do not start campaigning before February 9. All of the ‘presidentiables’ paid billions of pesos before the campaign,” she said in Filipino before hundreds of students at the Mariano Marcos State University.

“That is wrong under the constitutional point of view. These people have already violated the laws before they became president.”

Santiago threw her pick up lines.

She pulled one more:: “Ballot box ka ba? Kasi wala akong pakialam, basta safe ka,” she said to the delight of the crowd. (Are you a ballot box? Because I don’t care as long as you’re safe.)

And another one: “Wala akong pakialam kung sino ang iboboto mo basta sana nasa akin ang boto ng mga magulang mo.” (I don’t care who you are voting for as long as I got your parents’ votes.)

The senator didn’t stay long, however. She left after her brief speech, saying she had appointments in Metro Manila.

This left Marcos alone to answer the students’ questions. 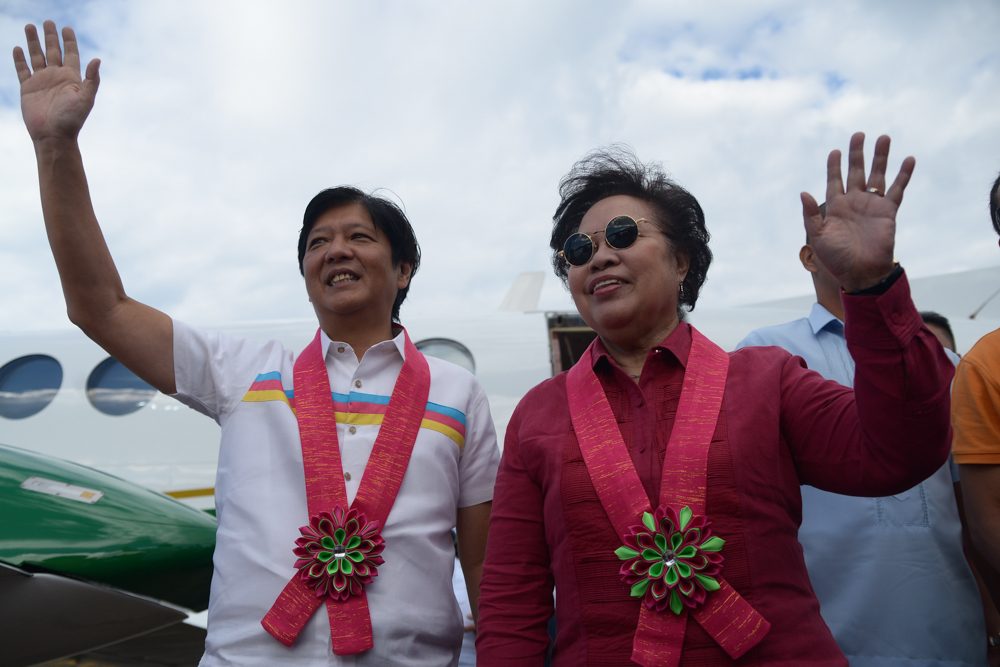 It’s an odd set-up, since it’s usually the standard-bearer who occupies much of the campaign time and stage.

Earlier in the day, during the tandem’s proclamation rally at the Imelda Cultural Center, Santiago herself alluded to her illness when she said Marcos would be her ideal replacement should “something happen to me.” (READ: Miriam to Ilocanos: If something happens to me, Marcos to take charge)

Asked later to comment on her remarks, Marcos dismissed it as a joke.

“Si Senator Miriam palabiro palagi nyang nababanggit yang mga bagay na yan.” (You know Senator Miriam, she always jokes and says things like that.)  “I think it is just to demonstrate na para sa kanya may kumpyansa s’ya sa akin, kami ay nagkakasundo (that she has confidence in me and that we are aligned).”

Santiago earlier said she’s free from cancer. But she has refused the challenge for her to release medical records to prove her claim.

A once-formidable presidential bet in 1992, Santiago is trailing behind other candidates in the latest survey. But Marcos is running second, and he’s banking on the support of the Ilocos region to make him vice president. – Rappler.com