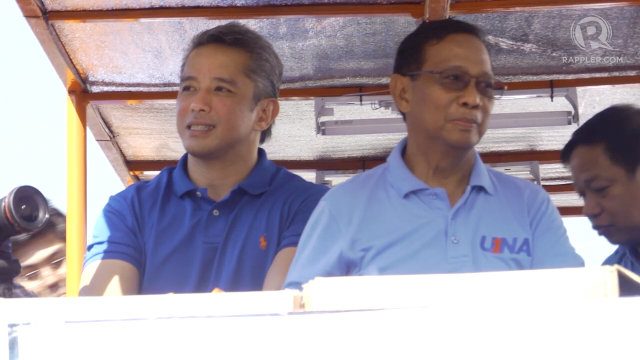 Vice President Jejomar Binay vists another bailiwick on the third day of the campaign period — Cavite.

In exchange for securing votes for him the province, Binay has a reward for ally and incumbent Cavite Governor Jonvic Remulla.

Vice President Jejomar Binay heads to Cavite, another provincial stronghold, on the third day of the official campaign period. In 2010, Binay beat then Liberal Party vice presidential bet Mar Roxas by around 200,000 votes.

After six years and with both political rivals neck and neck in the presidential race, will Cavite once again prove that it is Binay country?

Remulla assures that Cavite, where Binay won over Mar Roxas in 2010 by around 194,000 votes, will secure a win for the UNA standard-bearer. There are over 1.84 million registered voters in Cavite for the May polls.

If he wins the presidency, Binay says he already has a reward in mind for Remulla.

JEJOMAR BINAY, PRESIDENTIAL CANDIDATE: Local government officials, I have news for you. I am making Governor Jonvic as the next secretary of the interior and local government. Why did I choose him? Because the issue now is about who has the capability and the experience for the job.

But can Binay emerge victorious in the province in the coming elections?

Caviteños who voted for him in 2010 say they will vote for Binay again in May even if he’s hounded by corruption allegations during his time as Makati Mayor.

RAPPLER: Why are you supporting him?

ROSITA NACIONAL, BINAY SUPPORTER: Because they’re saying that he’s a thief and yet they can’t prove it. How dare them!

EVELYN BAUTISTA, DUTERTE SUPPORTER: Even if they’re saying he overpriced city projects, that’s okay because he accomplished many things when he was Makati Mayor. That includes building a hospital with free equipment and services. We’re okay with that. That’s better than those who are actually corrupt and didn’t do anything to help others.

JEJOMAR BINAY, PRESIDENTIAL CANDIDATE: Because of your warm welcome, I am sure that I will win the coming elections.

Securing the Caviteño vote will be key if Binay wants to rise up from his second place finish in the latest presidential survey.

Binay hopes that months of partnerships with local officials will boost his presidential bid.

But with his supporters unfazed by corruption allegations against him, Binay can only hope that scoring a repeat win in Cavite isn’t farfetched.