Feb 13, 2016 8:55 PM PHT
Bea Cupin
Facebook Twitter Copy URL
Copied
'What we went through wasn’t easy. If you go back in history, a lot of lives were lost and wasted. Human rights were violated in the name of politics,' says Leni Robredo 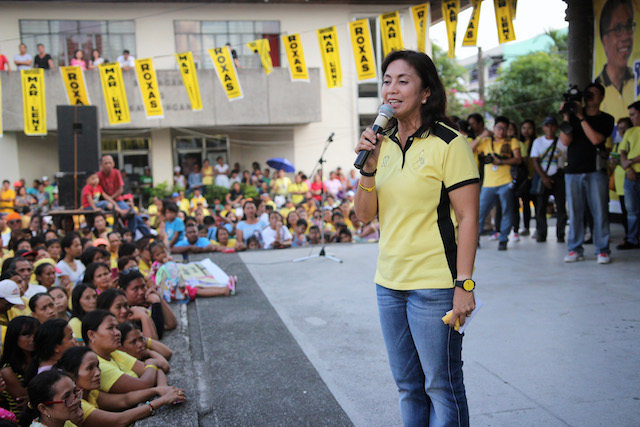 (It’s sad because what we went through wasn’t easy. If you go back in history, a lot of lives were lost and wasted. Human rights were violated in the name of politics.)

Robredo was in her hometown for the second leg of the ruling LP’s kick-off for its 2016 campaign for the national elections, alongside party standard-bearer Manuel Roxas II and several members of their senatorial slate.

Martial law and the subsequent EDSA People Power Revolution that ousted dictator Ferdinand Marcos are personal issues for Robredo, who joined street demonstrations leading up to the popular revolt. In previous interviews, Robredo said it was the EDSA  Revolution that made her decide to come back home to Naga City after studying in Manila.

It was in Naga where she met and later married her husband, the late Jesse Robredo. (READ: The ‘ordinariness’ of Jesse Robredo)

One of Robredo’s rivals for the vice presidency, Senator Ferdinand Marcos Jr, is the only son of the late dictator. He told media during a sortie in Pangasinan that martial law isn’t even an issue in his campaign. (READ: Marcos: We don’t talk about EDSA People Power Revolution in my campaign)

It was the media and his political rivals, he said, who keep bringing it up.

That isn’t the case for Roxas, who makes it a point to cite the tumultuous years of the country under martial law in sorties and events around the country. The Philippines was under martial rule for almost 3 decades. During those years, billions were allegedly stolen from the country’s coffers while thousands fell victim to abuse and enforced disappearances allegedly sanctioned by the dictator.

(For the victims of martial law, it’s not just an issue raised by the media. They were hurt. A lot of our countrymen might not have been hurt physically during martial law but a lot of years were stolen from us.)

Aquino’s father, the late Senator Benigno “Ninoy” Aquino Jr, was among the many politicians jailed by Marcos during his reign. The older Aquino lived in exile in the United States with his family but was killed upon his return to the country. The EDSA Revolution eventually ousted the older Marcos, installing Aquino’s mother, the late Cory Aquino, in power.

Thirty years after the bloodless revolution in Manila, public sentiment on the martial law years have seemingly changed, at least on social media. (READ: #NeverAgain: Martial law stories young people have to hear)

(I feel sad when I see social media posts protraying the martial law years as the best in our country’s history. All these will be disproven by facts and figures but for some reason, a lot of people believe that it’s better to be under a dictatorship.)

Robredo, who trails behind survey front runner Senator Francis Escudero and Marcos in the latest voter preference surveys, said she has nothing against those who think differently from her.

The country is set to celebrate the 30th anniversary of the People Power Revolution later this month.