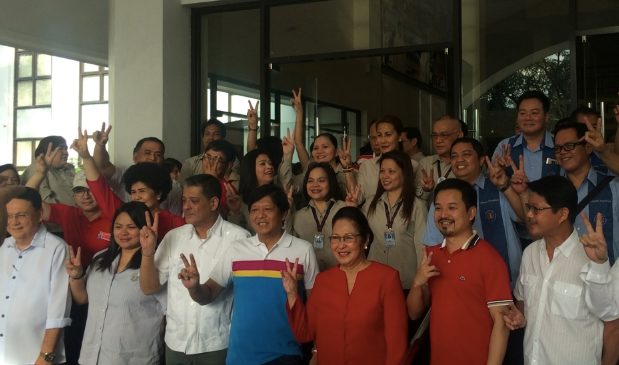 (It has been difficult for us to choose who to support for vice president, just like how we had a hard time choosing Secretary Mar Roxas as our presidential candidate, because many of them are close to us.)

But, according to Gomez, she decided to endorse Marcos because he has a “progressive” plan for the people and he is armed with “rich experience” in public service.

She also highlighted that their family, the Ejercitos, have been in alliance with the Marcoses for about 5 decades.

(The family of our guest of honor today is truly a friend we can depend on.)

Estrada was also present when Marcos officially announced his intention to run in October last year. The former president was even quoted as saying that he did not have a hard time picking his fellow president’s junior.

In a short speech, Marcos established rapport with San Juan residents by telling them that his family once lived in the city during the time former President Ferdinand Marcos was still a congressman.

He said they lived at 204 Ortega Street when the city was still part of Rizal province. He also highlighted how Estrada honored their family, renaming the street as “Marcos Street.”

The Marcoses also have a house along P Guevarra Street in San Juan.

“For the first few years of my life, I was a resident of San Juan…. Rather than welcoming me, you may say welcome back,” he said in a mix of English and Filipino.

Marcos is a member of the Nacionalista Party (NP), where Gomez’s rival for the mayoralty race belongs.

Asked about the shifting support of political party members, Marcos acknowledged that it is indeed a phenomenon that is specifically strong in the 2016 elections.

“Talagang in this election, ramdam na ramdam na nagtatawiran nga sa party lines. (In this elections, we can really see the crossover of political party members.) I think [it’s] a sign of the weakening of the multi-party system we are experimenting with,” said the candidate.

Gomez, on the other hand, said crossing political parties is beneficial “if it will entail the revival of the country’s unity.”

“I also want to achieve that kind of unity. Maybe with this kind of crossing party lines we might just be able to achieve [that] and be united once again,” she said. – Rappler.com