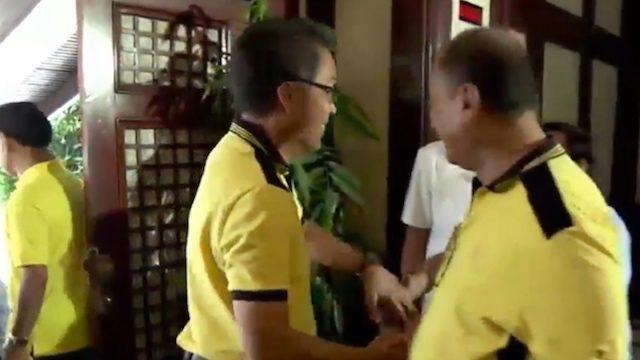 MANILA, Philippines – The camp of Liberal Party standard-bearer Manuel “Mar” Roxas II dared his rivals to make all of their expenses public and identify who owns the planes and helicopters they’re using in their campaign sorties.

The dare came after Davao City Mayor Rodrigo Duterte accused Roxas of corruption. In a statement released to media last Saturday, February 13, Duterte had claimed that Roxas “has been protecting the business interests of miner Eric Gutierrez, owner of SR Metals Incorporated.”

“Hanggang ngayon hindi nahinto (Until now, Gutierrez’s mining operations continue),” the statement quoted Duterte as saying. “Why? Because of the protection of Roxas.”

The mayor also claimed that Roxas – who was once his friend before the Malacañang race heated up – has been using Gutierrez’s private planes.

“I have personally seen Roxas use that plane in Davao,” Duterte said. “If that is not corruption, then what do you call that?”

Gutierrez is identified as the chairman of SRMI, which was registered before the Security and Exchange Commission (SEC) in 2005. The company lists as its affiliates the following: Lekcin Corp., Galeo Equipment Corporation, San R Construction Corp., and Bay Peak Property Holdings, according to its 2014 General Information Sheet filed before the SEC.

That Gutierrez is a friend of Roxas is not exactly a secret. The businessman was among the many people who greeted the Liberal Party standard-bearer when he arrived in Club Filipino to officially get President Benigno Aquino III’s endorsement in July 2015.

Gutierrez is also a good friend of LP spokesman Caloocan Representative Edgar Erice, one of the original incorporators of SRMI and a fierce Roxas ally. When the company incorporated, Erice had 10,000 shares of stocks.

Gutierrez is also the owner of a boutique airline. Roxas has been using these planes in sorties and trips around the country, even before he was a declared candidate for 2016.

On Monday, February 15, administration coalition spokesman Ibarra Gutierrez (the 2 are not related) said the planes are being leased to Roxas.

(It’s very clear, okay? The private planes being used for the campaign are being leased. If you want, we can even show the receipts.)

Roxas made the same assertions in an interview with reporters in Silay City on Tuesday. “Hindi ‘yan libre, hindi ‘yan pabor, at hindi ‘yan arbor. Binayaran ko ‘yan (That’s not free, that’s not a favor, it’s not mine for the taking),” he said.

(Second, and I can assure you this, the money I used was not stolen. Now, they ask be about my use of planes to go around the country and I answer it. What about the other cadnidates? Maybe it would be good if you ask them the same question.)

Erice defended Roxas’ use of Gutierrez’ planes. “All presidentiables are using planes of firms engaged in mining, aviation, oil, power, etc. There’s nothing wrong about it,” said Erice in a text message to Rappler.

The congressman added: “It’s up to them to disclose whether they pay for it or if it’s a donation. As far as Roxas is concerned, he pays for his use.”

“He should explain because he keeps on saying that he has no money,” said Erice. – Rappler.com