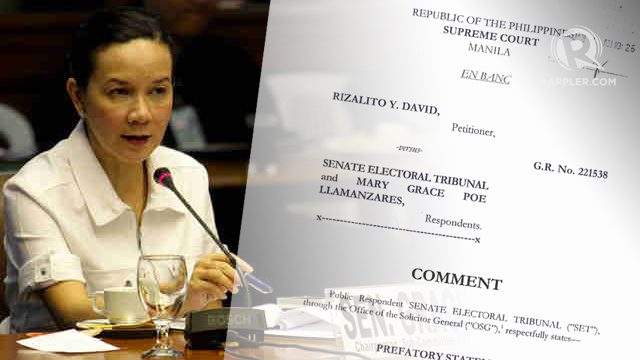 Facebook Twitter Copy URL
Copied
In oral arguments on Grace Poe's disqualification, Solicitor General Florin Hilbay use official statistics to support his argument that she is a natural-born Filipino

MANILA, Philippines – It is not the first time Solicitor General Florin Hilbay sided with presidential candidate Grace Poe’s claim that foundlings like her are natural-born Filipinos, but on Tuesday, February 16, he had numbers to back him up.

According to the Hilbay, the correct question is not whether a foundling has 50-50 chance of being either Filipino or a foreigner.

Poe is asking the SC to overturn the rulings of the Commission on Elections (Comelec) en banc cancelling her certificate of candidacy for president in the 2016 elections, on the grounds that she is not a natural-born citizen and did not meet the minimum 10-year residency requirement.

The solicitor general refused to defend the Comelec before the SC because he earlier defended the position of the Senate Electoral Tribunal (SET) that favored Poe.

Defending the Comelec ruling – that Poe should be disqualified – would contradict his defense of the SET ruling saying Poe is natural-born and met residency requirements. (READ: FULL TEXT: SolGen defends SET ruling in favor of Grace Poe)

The SC thus invited Hilbay to speak at the orals as a “tribune of the people.”

Back then, Hilbay said, 10,558,278 Filipinos were born in the Philippines as opposed to the 15,986 foreigners. This translates to a 1:661 ratio of non-Filipino children to Filipino children, or a 99.83% statistical probability that any child born in the country would be a natural-born Filipino.

“I am confident that the statistical probability that a child born in the Philippines would be a natural-born Filipino will not be affected by whether or not the parents are known. If at all, the likelihood that a foundling would have a Filipino parent might even be higher than 99.9%,” the solicitor general argued.

He said he does not imagine foreigners abandoning their children in the country “thinking those infants would have better economic opportunities,” while “Filipinos abandon their children out of poverty, or perhaps, shame.”

For him, denying full Filipino citizenship to all foundlings or to declare them stateless would be “downright discriminatory, irrational, and unjust.”

“It just doesn’t make any sense. Given the statistical certainty – 99.9% – that any child born in the Philippines would be a natural-born citizen, a decision denying foundlings such status is effectively a denial of their birthright,” he said.

“There is no reason why this Honorable Court should use an improbable hypothetical to sacrifice the fundamental political rights of an entire class of human beings. Your Honors, constitutional interpretation and the use of common sense are not separate disciplines.”

In arguing his case, Hilbay cited other reasons why he believe foundlings like Poe are natural-born Filipino citizens “as a matter of right”: