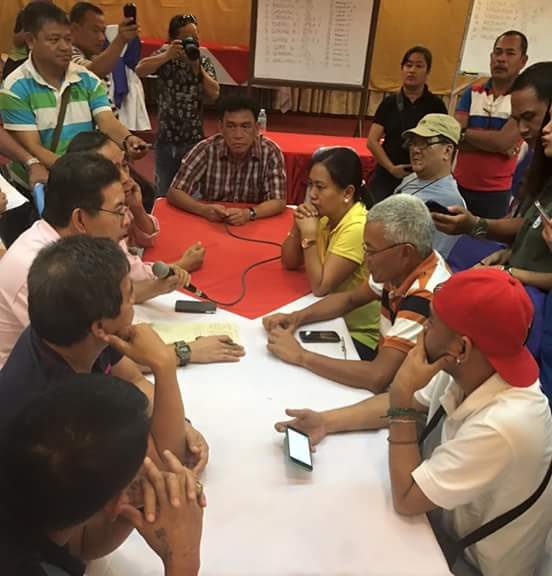 Facebook Twitter Copy URL
Copied
The Comelec's national media partner, GMA-7, is giving more slots to local journalists in the Cagayan de Oro event, but will not let them bring cameras and other equipment

CAGAYAN DE ORO CITY, Philippines – After the Cagayan de Oro Press Club raised howls of protest over limited slots for local media at the first presidential debate to be held here, the national media partner of the Commission on Elections (Comelec), TV network GMA-7, adjusted the number of slots it will make available to the Mindanao journalists.

There is, however, another restriction imposed on the local press: on Sunday, February 21, they are not allowed to bring in “any type of coverage equipment.”

GMA-7 agreed to increase the slots for local media from 10 to 25 after the Cagayan de Oro Press Club accused the TV network and the other Comelec partners – the Philippine Daily Inquirer plus the Kapisanan ng mga Brodkaster ng Pilipinas (KBP) – of discrimination.

The debate, organized under a memorandum of agreement (MOA) with the Comelec, will be held at Capitol University in Cagayan de Oro City.

On Tuesday, February 16, Mindanao Gold Star Daily editor in chief and Cagayan de Oro Press Club board member Herbie Gomez posted an invitation letter from GMA-7. The letter stated that there are now 25 seats reserved for local media who want to be part of the debate audience.

These local media, however, cannot bring “any type of coverage equipment.” They are only “free to tweet about the debate as it unfolds.”

Details here…. Excerpts from the invite sent to me by GMA7 re presidential debate:Dear Mr. Gomez:Greetings,…

Veteran photojournalist Froilan Gallardo called the limitation a joke, saying that he would be useless inside the venue without his cameras.

“We cover because we need to capture how these candidates answer questions and address the issues,” he said.

Also on Tuesday, the Comelec said that it had started processing accreditation for media companies to cover the debate. The deadline for the accreditation is on Friday, February 19.

This poses another problem for journalists based in other parts of Mindanao.

Benjie Caballero, a veteran journalist based in Sultan Kudarat, said getting accreditation would cost extra time and money for those like him who will be coming from other areas.

“We hope that the Comelec will allow accreditation up until Saturday so we won’t have to spend a considerable amount of money for the travel and an extra day of accommodation,” Caballero said.

Earlier, the National Union of Journalists of the Philippines (NUJP) called on the debate organizers to ensure equal access for all media.

“We agree with the Cagayan de Oro Press Club that the process of choosing who next to lead the country is so important that every opportunity available to journalists to be able to inform the broadest segment of the public must be optimized,” said the NUJP in a statement.

Davao City Mayor Rodrigo Duterte has threatened to skip the debate “if the local media will feel they are being treated as second-class citizens in the press community.” – Rappler.com