Binay to Pangasinan: ‘I will be a spending executive’ 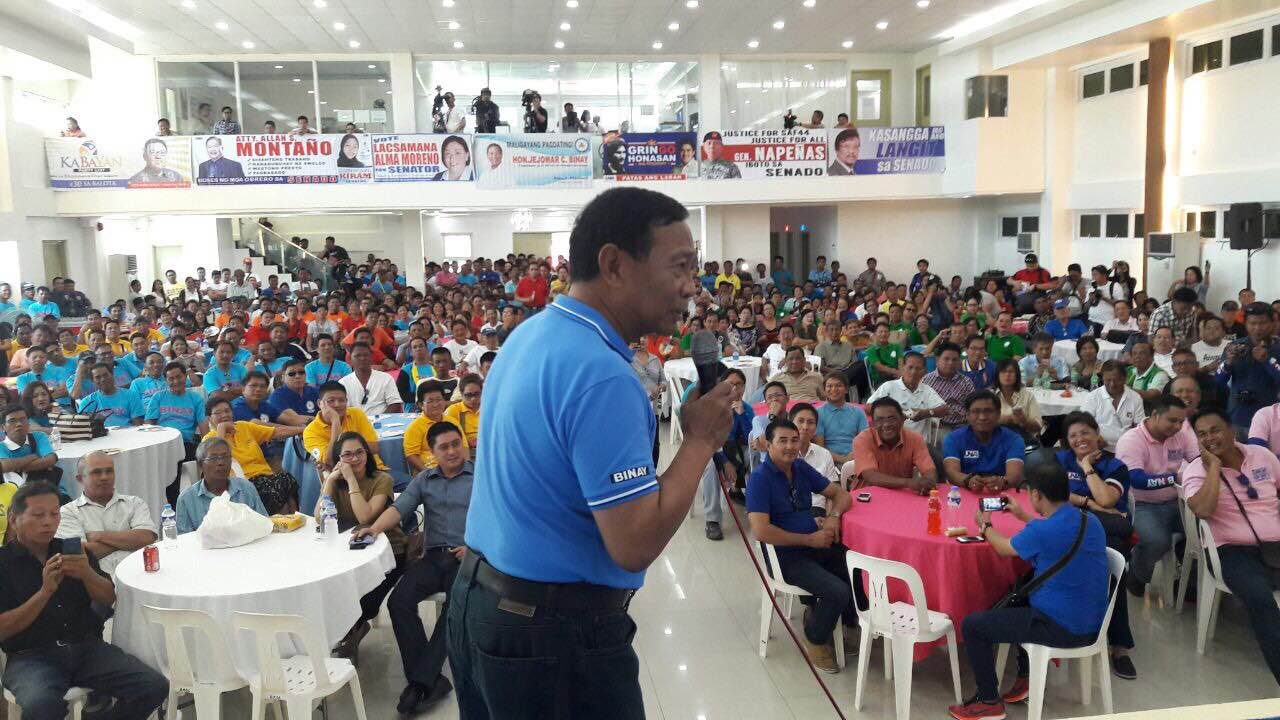 Facebook Twitter Copy URL
Copied
'At the end of this administration, he (Aquino) will say, 'This is our savings.' Wow, when you are given a budget, you are supposed to spend that! Anong klaseng executive ‘to?' says Vice President Jejomar Binay

PANGASINAN, Philippines – United Nationalist Alliance (UNA) standard-bearer and Vice President Jejomar Binay said there will be no government underspending if he is elected as president.

Binay made the promise to barangay leaders in Binmaley in this vote-rich province,  where he again hit President Benigno Aquino III for government underspending, which has been cited for the country’s slower than expected economic growth, among other factors.

“Matatapos ang administrasyong na ito, sasabihin niya (Aquino), ‘Ang savings po ganito.’ Wow, when you are given a budget, you are supposed to spend that! Anong klaseng executive ‘to? How can they defend themselves now doon sa underspending?” Binay said on Wednesday, February 17.

(At the end of this administration he’ll say, ‘This is our savings.’ Wow, when you are given a budget, you are supposed to spend that! What kind of executive is he? How can they defend themselves now in terms of underspending?)

The Vice President noted that “every delay in the spending would affect performance.”

“That is not the job of a good executive. I will be a spending executive. The government is there to spend,”said BInay, who is leading in the latest Social Weather Stations, though there was a slight dip in his rating.

The Aquino administration tried to remedy its underspending, which slowed down growth to 3.9% in 2011 from 7.7% in 2010, through the Disbursement Acceleration Program (DAP), a special spending program meant to stimulate economic growth. The country’s finance managers credit DAP with boosting the economy in 2013, which grew by 7.2% that year.

The program was challenged by various groups before the Supreme Court, which deemed certain executive acts under the DAP unconstitutional, leading to the discontinuation of projects funded under the program.

Pangasinan can also be considered a bailiwick of Senator Grace Poe, Binay’s toughest foe based on election surveys. During the 2013 senatorial elections, Poe garnered 818,598 votes in the province of her late father, actor Fernando Poe Jr.

UNA spokesperson Mon Ilagan said winning the Pangasinan vote is a “concern” for the Binay camp, but noted that the situation in 2016 is different from 2010.

“It is a concern, but it is a different situation now sapagkat ang tumatakbong governor ng Pangasinan ngayon, si former Congressman Mark Cojuangco, ay nagpahayag ng kanyang full support kay Vice President Binay (It is a concern, but we have a different situation now because one of the candidates for Pangasinan governor, former Congressman Mark Cojuangco, expressed his full support for Vice President Binay),” Ilagan told reporters.

(This is why we cannot discount the support he will be raising because Mark Cojuangco was  able to help a lot of people. There’s a big possibility that Vice President and UNA will win in Pangasinan.)

Cojuangco made the case for Binay when the Vice President sought the endorsement of the Nationalist People’s Coalition (NPC) in September 2015.

While the elder Espino already endorsed Roxas’ presidential bid, he was  among the local officials who welcomed Binay upon his arrival at the province. He did not join the Vice President during the motorcade.

According to Ilagan, Binay is not only relying on Cojuangco’s support to  win in Pangasinan, the 3rd most vote-rich province in the country with more than 1.71 million voters registered for the May polls.

“Maraming kaibigan at maraming natulungan. ‘Di makakaila ‘yung kanyang mga nagawa dito sa Pangasinan (He has friends and he has helped many people here. You cannot deny what he has done here in Pangasinan),” said Ilagan.

Among the local leaders who joined Binay in his Pangasinan sorties was Binmaley Mayor Sammy Rosario, who is seeking reelection under UNA.

The Vice President also previously visited Pangasinan when it was hit by severe flooding due to typhoons in recent years.

(Vice President Binay, does not stop [working]. Like I said, he is a ground warrior and street smart. I think this is one advantage he has over his opponents because his core support remains intact.)

Binay also attended the 60th Annual Council Meeting of the Boy Scouts of the Philippines (BSP) in Pangasinan, which was not open for media coverage.

He was once again elected as BSP national president in June 2015, in the middle of a controversial issue involving an alleged P200-million deal between Alphaland and BSP, the subject of a Senate probe. – Rappler.com