Duterte on toughest rival in Comelec debate: All of them 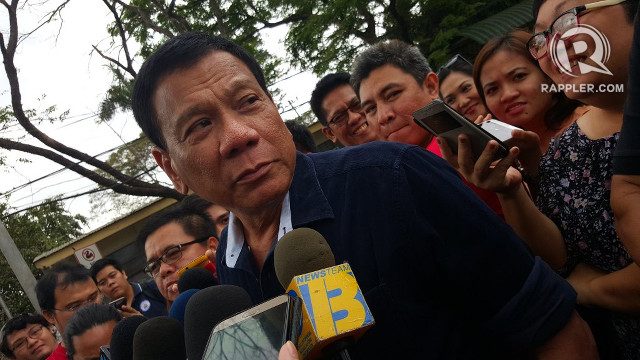 Facebook Twitter Copy URL
Copied
The presidential bet admits his weaknesses: being a slow talker and not being an expert on certain issues

MANILA, Philippines – Rodrigo Duterte joked on Thursday, February 18, that all of his fellow candidates will be fearsome rivals during the upcoming Commission on Elections (Comelec) debate in Cagayan de Oro.

Asked who of the candidates he is most scared to debate with, Duterte said, “Silang lahat. Kaya ‘pag punta sila, butasan ko yung eroplano nila (All of them. That’s why when they’re on their way, I will punch holes in their plane).”

The first presidential debate organized by the Comelec will take place on Sunday, February 21, in a private university in Cagayan de Oro City.

Duterte, Manuel Roxas II, Grace Poe, Miriam Defensor Santiago, and Jejomar Binay have said they will be attending the debate.

Nicknamed “The Punisher” for his decisive, iron-fisted approach to fighting crime, Duterte admitted he has to contend with his weaknesses when it comes to the debate.

One such weakness is his lengthy way of talking, a problem with the strict time limits expected at the debate.

“I’m a slow-talker, I am a deliberate [speaker], I release words slowly. What I conceive in my head, the gray matter between my ears, takes a long time to express orally,” he told reporters.

A political strategist told Rappler there are efforts to help Duterte keep from going overtime.

Duterte also admitted he is not an expert on many issues, most especially on the nationwide concern over Internet speeds.

If caught off guard, he said he would not be ashamed of his ignorance.

“Sabihin ko wala akong alam diyan (I will say I don’t know anything about that)…Why should I feel nervous? I will be honest enough to say that, I have no obligation to lie in the first place,” he said.

Duterte will be the only candidate to have had no prior experience of a nationwide political debate.

But this doesn’t mean he won’t put up a fight.

“I think I might not be the brightest guy there on stage but I’m sure I can say something,” he said. – Rappler.com