Duterte of the South woos the Solid North 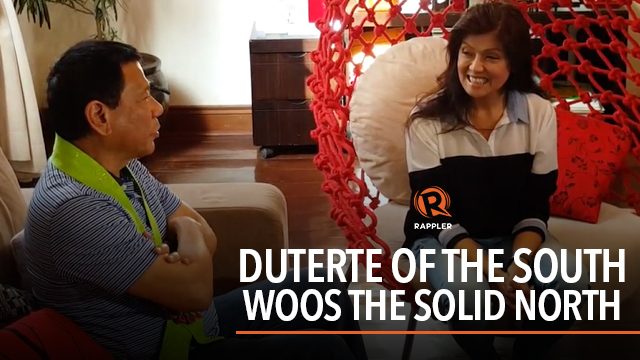 Will he clinch the support of the Marcos bailiwick?

In front of the province’s local government officials, he makes his pitch for federalism.

(Federalism, no other choice, because now there’s a problem with distribution. In Congress, it’s up to them, whoever is closest to Malacañang gets the funding…Our last card to find peace in Mindanao is federalism. Short of that Ma’am, it’s dangerous, it will explode. The problem is, we in Mindanao are fighting. That’s why I told Moro leaders, you know this BBL, when I first read the draft, I said it wouldn’t push through.)

With Imee, Duterte visits the resting place of her father, the former president and dictator Ferdinand Marcos Sr.

RODRIGO DUTERTE, PRESIDENTIAL CANDIDATE: Because he was president of the republic of the philippines, and he was a soldier and he was good. But nagtanong na lang kasi ang tao kasi wala nang nakita kundi pagkakamali. People judge best when they condemn. You are at your best element, esp yung kasiraan ng kapwa mo.

(But people are questioning because they see nothing but errors…You are at your best element when you are destroying the reputation of your fellow human being.)

Some groups want a Duterte-Marcos tandem elected in May.

Q: So what are you fighting for sir? Why do you support Bongbong and Duterte as a tandem?

Personally because I am not a member of any party, I volunteered for this job because I beleive the Philippines needs real change and the best tandem so far would be Mayor Duterte from Davao representing Mindanao and Senator Bongbong Marcos representing Luzon especially Northern Luzon. These two? They have charisma, they have vision and they are sincere in their efforts to effect change in the Philippines.

There are almost 380,000 registered voters in Ilocos Norte.

Did the tough-talking mayor from the South convince the people of the North?

We’ll find out in May.