Cagayan de Oro debate crowd: Where are our issues? 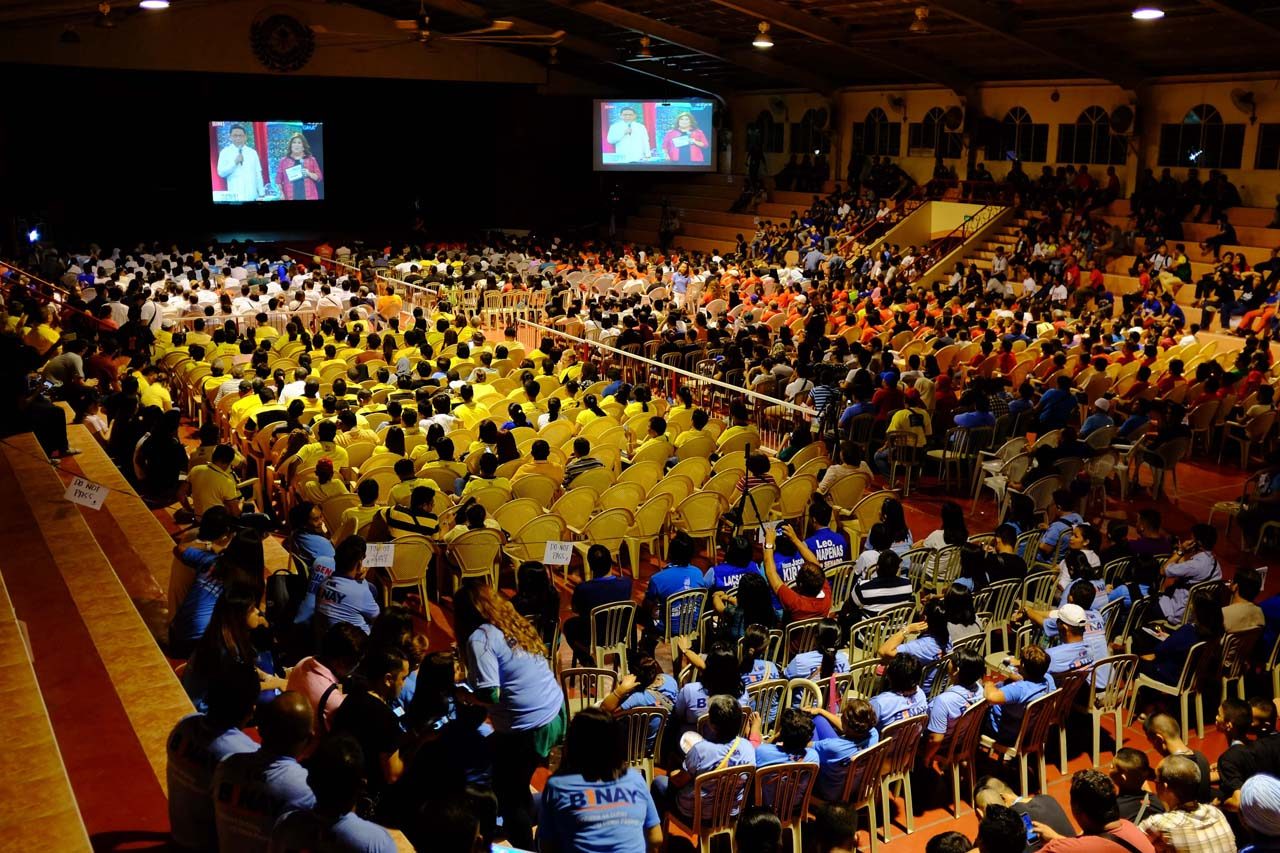 Facebook Twitter Copy URL
Copied
The first presidential debate fails to take up candidates' plans for the indigenous peoples of Mindanao, agriculture, and persons with disabilities

CAGAYAN DE ORO CITY, Philippines – Representatives of various sectors trooped to the Capitol University here on Sunday, February 21, hoping to hear presidential candidates, in their first debate ever, discuss their issues, but they were disappointed.

With certain questions asked of only two candidates, and with bets constrained to a minute each to answer, the debate failed to take up their plans for the indigenous peoples of Mindanao, agriculture, and persons with disabilities, among other things. (READ: Of 2-hour presidential debate, 48 minutes were advertisements)

Sunday’s event was the first in a series of presidential debates organized by the Commission on Elections with various media partners. The Cagayan de Oro debate was mounted with GMA Network and the Philippine Daily Inquirer. (READ: Rappler sues Comelec chief over debates)

Dr Enrique Ampo, a wheelchair-bound dentist, was part of the audience at the debate.

He and Barangay Gusa Councilor Martin Gadrinab, also a person with disability (PWD), said they were hoping to hear the candidates’ take on the plight of the differently abled.

Ampo said that they had been actively campaigning for the government to acknowledge and implement laws and policies for PWDs.

Gadrinab pointed out that ever since Batas Pambansa 344 or the Accessibility Law was approved during the time of President Ferdinand Marcos, the government had failed to fully implement it. “When will the government listen to us PWDS?”

He said that, under the law, the local government should provide 1% of the internal revenue allotment for projects that would benefit PWDs and ensure a safe environment for them.

“We want them to acknowledge us,” Ampo said.

Where was talk about IPs? Garbed in full tribal regalia, Bai Norito Gabo, wife of the former Datu Nilo Gabo, the tribal chieftain of the Tigwa Manobo, came to the debate with Datu Moreno Indagnay. They wanted to see if the debate would at least take a stand on Mindanao issues, especially on culture, traditions, agriculture, and peace and order.

Bai Norita said that she was glad that the candidates tackled Mindanao even for a bit, but these involved issues about the proposed Bangsamoro Basic Law and poor infrastructure in the regions. (READ: Duterte to Roxas: ‘Daang Matuwid’ failed Mindanao)

Norita and Indagnay were accompanied by Rhyan Casino, an adopted Manobo and youth leader in Cagayan de Oro City, who acted as their translator for parts of the debate.

“I am also glad to see that some of them are not corrupt,” Gabo said.

In a statement sent to Rappler, the Hampaslupa Youth Campaigners said that the next president of the republic should allow young people to have a meaningful and full participation in the crafting of policies related to food, nutrition, and agriculture.

Young people should also be involved in the implementation of programs in both local and national levels, said the group, which claims to have close to 2,000 young leaders as members from all over the Philippines.

“We believe that the agriculture and food security for the next generation of Filipinos should be every presidential candidate’s top priority,” the statement said.

Twenty-year-old Lailane Cubillan, a first-time voter in May, said that if she only had to chance to talk to the candidates, she would have wanted to convince them to give free college education to all marginalized youth.

A food technology sophomore at the Mindanao University of Science and Technology, she hails rom Agora, one of the most depressed area in the city. She lives with her aunt because her mother is overseas, and dreams of a good education to help lift her family out of poverty.

Cubillan said free college education would take out-of-school youth off the streets and into a brighter future.

“The government should put a premium on helping underserved youth, make more schools accessible to the poor youth, and help ensure that they will be part of change and participate in economic development,” she said. “The president should have word of honor.”

Cubillan’s friend, 21-year old Jessa Cabatuan, wanted to meet Davao City Mayor Rodrigo Duterte. An out-of-school youth who also hails from Agora, she said Duterte offers hope for the likes of her who want to live in a peaceful society.

Cabatuan said crime is a fact of life in their community, and Duterte’s promise of fighting criminality gives hope to exasperated youth like her.

Her presidential bet did not disappoint and talked about dismantling drug syndicates in his first 6 months in office, and stopping rice smuggling in 3 days.

So she is encouraged to go out and vote come May 9, and urged other young people to do the same. “Each vote is important.”

WATCH: What do Mindanaoans have to say about the 1st presidential debate?