CAGAYAN DE ORO CITY – If there was any pressure on Liberal Party (LP) standard-bearer Manuel Roxas II to deliver during the first Commission on Elections (Comelec)-supported presidential debate on Sunday, February 21, it wasn’t obvious.

When he arrived at the Capitol University in this city, the LP stalwart, wearing a barong and black slacks, only shrugged and smiled when he was asked if he was ready. (READ: Summary and highlights of the debate)

His spokesman says he came in with his “A-game.” But did Roxas deliver?

Roxas, who boasts of his stellar tack record and vast experience, came out with guns blazing, hitting his opponents for their perceived weaknesses during his opening spiel.

Roxas was clearly referring to Vice President Jejomar Binay, who has been hounded by corruption allegations; Davao City Mayor Rodrigo Duterte, known for his tough – and controversial – stance on crime; and Senator Grace Poe, who is barely halfway through her first Senate term.

To many, it was uncharacteristic of Roxas to hit opponents from the get-go but for those who’ve trailed him since he announced his presidential bid in July, the tirades didn’t really come as a surprise.

The moment he resigned from the interior department, Roxas has been taking subtle and not-so-subtle jabs at his opponents in speeches, chance interviews, and the like.

But it stood out on Sunday, particularly since it was only Roxas who started the debate on the offensive. His rivals chose to either narrate why they were running or say what they had to offer.

Compared to other bets, Roxas is one of the more experienced when it comes to public debates in the context of a national race. He ran for vice president in 2010, and participated in debates organized during that year, although he eventually lost to Binay.

Roxas flew into Cagayan de Oro around noon on Sunday, tagging along with him his wife, broadcaster Korina Sanchez, and son Paolo.

There were no jitters for the LP bet, who apparently spent the morning doing his usual jogging route with his son.

As if acknowledging that most expected Roxas to do well in the debate, his spokesman Akbayan Representative Ibarra Gutierrez said they were “aware that there is a higher level of expectation for Mar compared to the other candidates,” in a statement released on Monday, February 22.

“This is a product of his long experience in public service. We know that the people want to see what he has done before,” added Gutierrez in the statement.

Thus it was his “long experience in public service” and track record that Roxas boasted of during the debate but it was also something his rivals assailed. 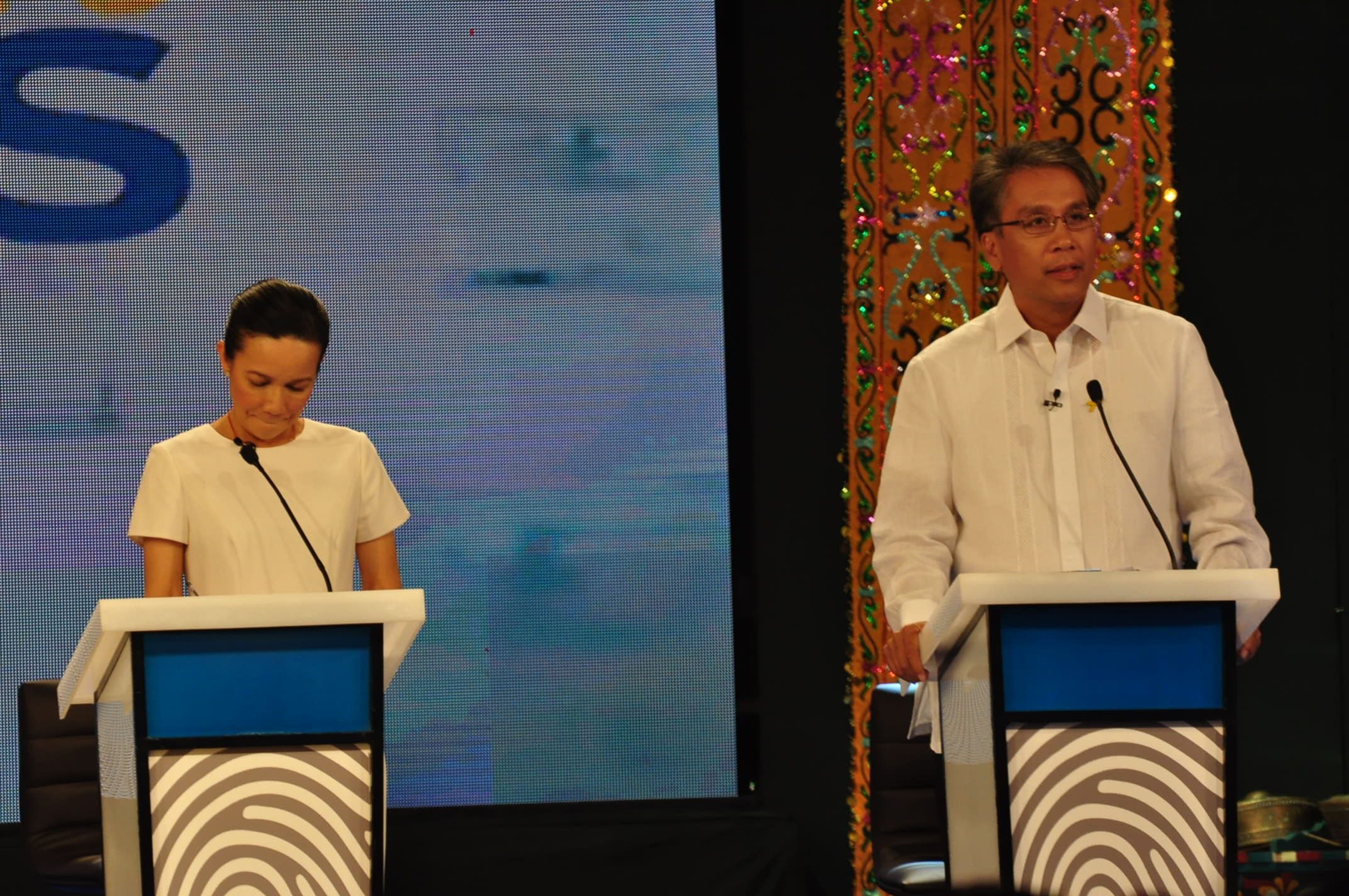 “I don’t think I need that much experience to know the government was lacking in transportation and security,” was Poe’s retort to Roxas’ assertion that the presidency can’t be an OJT (on-the-job-training), a dig at the neophyte lawmaker. Roxas was once Aquino’s transportation and later, interior department chief.

Right after, Binay criticized Roxas for his “analysis paralysis” in the aftermath of the 2013 Bohol earthquake and Super Typhoon Yolanda (Haiyan). Roxas was among the lead Cabinet officials tasked to handle the back-to-back disasters.

Roxas’ campaign hinges on the promise of continuing the supposed gains of President Benigno Aquino III’s administration. Aquino is also the chairman of the ruling party and officially endorsed Roxas’ presidential bid in July 2015.

It may be a boon for Roxas, given Aquino’s high approval ratings, but a nod from the President also means answering criticisms of his performance. Duterte, for instance, assailed Roxas’ claim that “Daang Matuwid” paid attention to Mindanao, unlike previous administrations.

Roxas, talking to reporters after the debate, said this was “natural.” (READ: Roxas’ pitch to Mindanao: Aquino admin valued you the most)

(I’m saying that I’ll continue the Straight Path. I’m not saying it’s perfect. In fact, I’ll be the first to say that much needs to be done and I’ll address that. If there’s something wrong, I’ll correct it. But we can’t deny that we’ve come a long way.)

Roxas won the first round of the debate – which focused on the issues, track records, and controversies surrounding the candidates – according to Rappler’s editors.

The succeeding rounds focused on poverty and development and the “Mindanao agenda.”

But it was here where Roxas, although successful in articulating his thoughts, didn’t shine as much as one would have expected.

Roxas, in chance interview with reporters, also takes dig at Poe who promised 30% of budget for Mindanao: #PHvote pic.twitter.com/PDboB1efm3

In forums before businessmen, educators, and even the average Filipinos, Roxas is one who easily rattles off numbers and statistics, offering hard data to back up his claims.

But the time limit – 90 seconds to answer a question, 60 seconds for another candidate to rebut and 30 seconds for a final reply – made it close to impossible for Roxas to be his usual, numbers and statistics-heavy self.

(The time was too short. These are serious, sensitive, and big problems and a minute isn’t long enough a time to answer these questions. The presidency is not a race. The presidency means studying a problem and determining how best to solve it.)

Diving into details is where Roxas is most comfortable.

“Otherwise I’m just giving you two-second soundbytes. What’s the point?” Roxas once told Rappler in an interview, after an editor quipped that his answers were too long. (READ: Mar Roxas: His own enemy)

When he spoke to reporters after the debate, Roxas went into full debate of the answer he had earlier made on-air.

(Don’t the other candidates know that the power problem in Mindanao has been solved? The other month, we opened a 300-megawatt plant in Davao. In the next months, 2,600 megawatts will be supplied to Mindanao. The important thing is that it’s there. That’s the solution. But until now, they’re saying we’ve yet to solve the problem of power in Mindanao. The solution is there.)

Keeping his answers short and sweet – and well within the time limit – was the focus of Roxas and his team’s preparation for the debate, Gutierrez had earlier told Rappler.

Boost for a campaign?

But more than the bragging rights of going well in a public debate is a bigger, more important question: what impact will it have in a campaign?

(Who knows? I showed up, I’m happy that I’m here. I’m happy because we’re talking about these things; these important things. But the debate felt a little too short. Leadership is 24/7, 365 days a year.)

Although 2 hours were allotted for the live program, 48 minutes were devoted to advertisements – including political ads.

(This isn’t a criticism of the organizers, but leadership, the problems of governance, these discussions can’t be crammed into a commercial break. So that’s something we’ll raise: next time, more time or maybe a different way to talk about these things.)

Aside from that, Roxas said he sees no need to change his strategy.

“My only strategy is to speak the truth, to speak straight – kung may nagawa na, kung ano nang nagawa, at ano pang kailangang gawin. Wala nang ibang stratehiya kundi sabihin ang katotohanan (if you’ve done something, what you’ve done, and what else needs to be done. There’s no other strategy than the truth),” he said. – Rappler.com