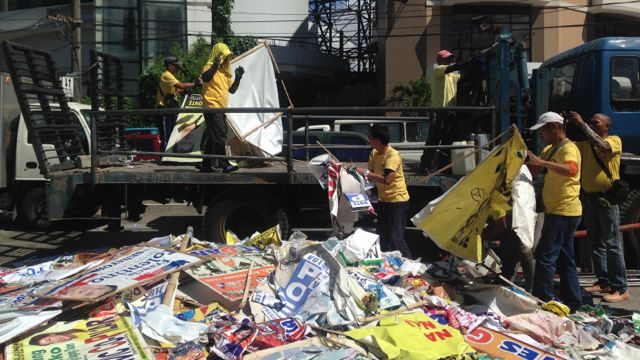 Facebook Twitter Copy URL
Copied
A truckload of confiscated campaign materials will be used by the Babuyan Islands Mission to create bags for 1,500 students in the far-flung island

MANILA, Philippines – A truckload of illegal campaign materials seized by the Metropolitan Manila Development Authority (MMDA) will soon have a new lease on life – as backpacks for schoolchildren of the Babuyan Islands.

On Wednesday, February 24, the MMDA turned over to the group Babuyan Islands Mission a truckload of campaign tarpaulins removed from areas identified by the Commission on Elections as non-common poster areas.

The tarps are part of at least 7 tons of illegal campaign materials torn down from lamp posts, trees, and other non-common poster areas as part of the MMDA’s “Oplan Baklas,” which began earlier this month with the start of the 90-day campaign period.

MMDA chairman Emerson Carlos said the agency had initially planned to use the tarps as emergency roofing in disasters.

But several groups, including the Babuyan Islands Mission and the Ecowaste Coalition, had asked for some of the tarps to be recycled and repurposed.

Mon Corpuz of the Babuyan Islands Mission said the tarps will be used as materials to make bags for 1,500 elementary students in the far-flung island.

The truckload of materials can make between 500 to 1,000 bags, which will be distributed to the students in time for the opening of classes in June.

Corpuz said providing children from poor, remote areas with bags and school supplies will motivate them to continue with their education.

“The children in these areas make the effort to go to school, even without food or school supplies,” he added.

On January 29, the environment department launched the “Basura-Free Election 2016” drive.

The MMDA is one of the government agencies supporting the campaign. – Rappler.com