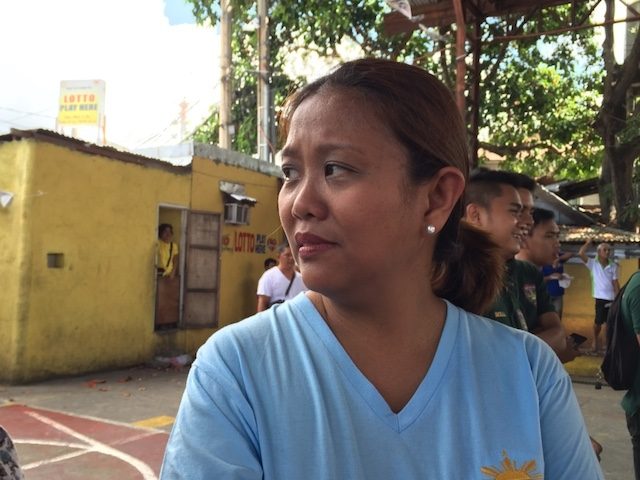 BATANGAS, Philippines – Senator Nancy Binay on Wednesday, February 24, came to the defense of her father,  Vice President Jejomar Binay, who is the subject of a video that has gone viral on Facebook.

A video by Facebook user R-Breezy shows the United Nationalist Alliance (UNA) standard-bearer seated on a chair as he hands out money to a number of people in a queue.

The song, “Make It Rain” by Fat Joe featuring Lil’ Wayne is the background music of the video, which has garnered more than 3.3 million views as of Wednesday.

At the sidelines of an UNA sortie in Batangas on Wednesday, Nancy said the video was taken during Christmas day “5 or 6 years ago” in front of the Vice President’s house in Makati.

It was not shot during the campaign period for the 2016 elections. This may explain why Binay was wearing yellow, the color of the administration party, in the video.

(First of all, I am saddened by this. The Vice President and our family have an annual tradition at home. He gives Christmas gifts to the people who visit him. Isn’t that the tradition of a Filipino family when you visit them during Christmas?)

Posted by https://web.facebook.com/rbreezyofficial/“>R-Breezy on Tuesday, February 23, 2016

According to the senator, VP Binay would only give out P20 to P50 bills per person and that the money is sourced from the Binay family’s personal funds.

(At the start of the year, we set aside money for that. For me, I would give fruits to children who are in line. I give them an apple or an orange.)

Binay, who has long been accused of corruption and unexplained wealth, was the subject of a yearlong Senate investigation.

On February 5, the Office of the Ombudsman upheld its criminal charges against the former Makati mayor of 21 years over the alleged overpricing of the Makati parking building, along with his son, dismissed Makati mayor Jejomar Erwin “Junjun” Binay Jr, and 22 others.

The Binay camp has always insisted that the allegations are meant to derail Binay’s presidential bid. Nancy said she wasn’t surprised about the video.

(At this point, I’m no longer surprised. I get sad because even the small things that can make our people happy, they try to destroy them. For us in the Binay family, we will continue providing the kind of service we are providing as long as these help or give happiness to our countrymen).

Nancy added that her father will not resort to vote-buying to secure his victory.

The Vice President, however, recently told voters during a sortie in Pantao Ragat, Lanao del Norte to accept politicians’ monetary bribes but still vote for the candidates they believe in, like Binay and running mate Senator Gringo Honasan. (READ: Binay to voters: Take politicians’ money but vote for your choice) – Rappler.com