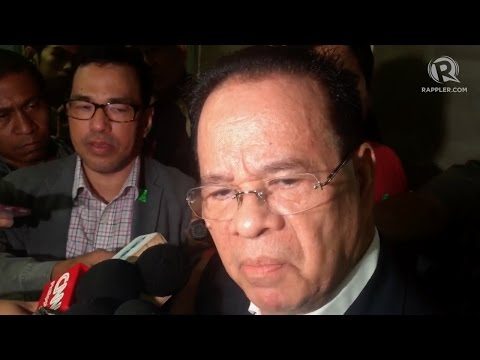 MANILA, Philippines – One of the petitioners seeking the disqualification of presidential bet Grace Poe asked the Supreme Court on Friday, February 26, to cite the Commission on Human Rights (CHR) in contempt for allegedly interfering in Poe’s disqualification case.

Former Senator Francisco “Kit” Tatad, through counsel Manuelito Luna, filed a motion asking the High Court to issue a show cause order against CHR officials and explain why they should not be cited in contempt of court for stepping into Poe’s case. (READ: All Memos in: SC to decide soon on Grace Poe case)

Luna said the CHR had no jurisdiction over Poe’s case, as there are no human rights violations involved in the case. (READ: SC told: Grace Poe as foundling ‘half the story’)

Tatad and several other petitioners have filed separate cases seeking Poe’s disqualification for allegedly not being a natural-born Filipino and failing to meet the residency requirement for presidential candidates.

“CHR cannot just join in the fray, it’s contemptuous. Besides, no human rights issue is involved in Poe’s cases. The matter has to do with the political privilege of a disqualified candidate. It is not even a right, much less fundamental,” Luna said in a text message.

Citing the Constitutional Commission, Luna said the CHR was established to secure the protection of rights of political detainees, treatment of prisoners and the prevention of tortures, fair and public trials, and cases of disappearances, among others.

“CHR officials should be told that the matter being litigated does not concern foundlings in general,” Luna said in the 15-page memorandum.

“Suffice it to state that petitioner’s cases should be the least of CHR’s concern since the same do not involve severe cases of human rights or human rights violations involving civil and political rights,” he added.

On Wednesday, February 24, the CHR urged the SC that it is the country’s obligation to secure the welfare of foundlings like Poe, as it maintained foundlings should not be stateless.

“In line with judicial decisions of the International Court of Justice, and the opinions of most highly qualified publicists in international law, the State has the obligation to grant them Philippine nationality even absent an enabling local law since it is an obligation erga omnes (toward all) to prevent statelessness among foundlings,” the CHR said.

“By its nature, the right to a nationality of foundlings is an independently enforceable human right,” the CHR added.

Poe’s counsel George Garcia, meanwhile, welcomed the CHR’s stand and said the agency “adds another voice” to the belief that foundlings are not stateless.

The senator was found as an abandoned infant in Jaro Cathedral in 1968. She was later on adopted by movie stars Susan Roces and the late action king Fernando Poe Jr. (READ: TIMELINE: Grace Poe’s citizenship, residency)

“[This] is a fact that we have been saying from day 1. With the growing build up of experts substantiating our position, we are confident that in the end Senator Poe’s natural born status will be upheld,” Garcia said. – Rappler.com