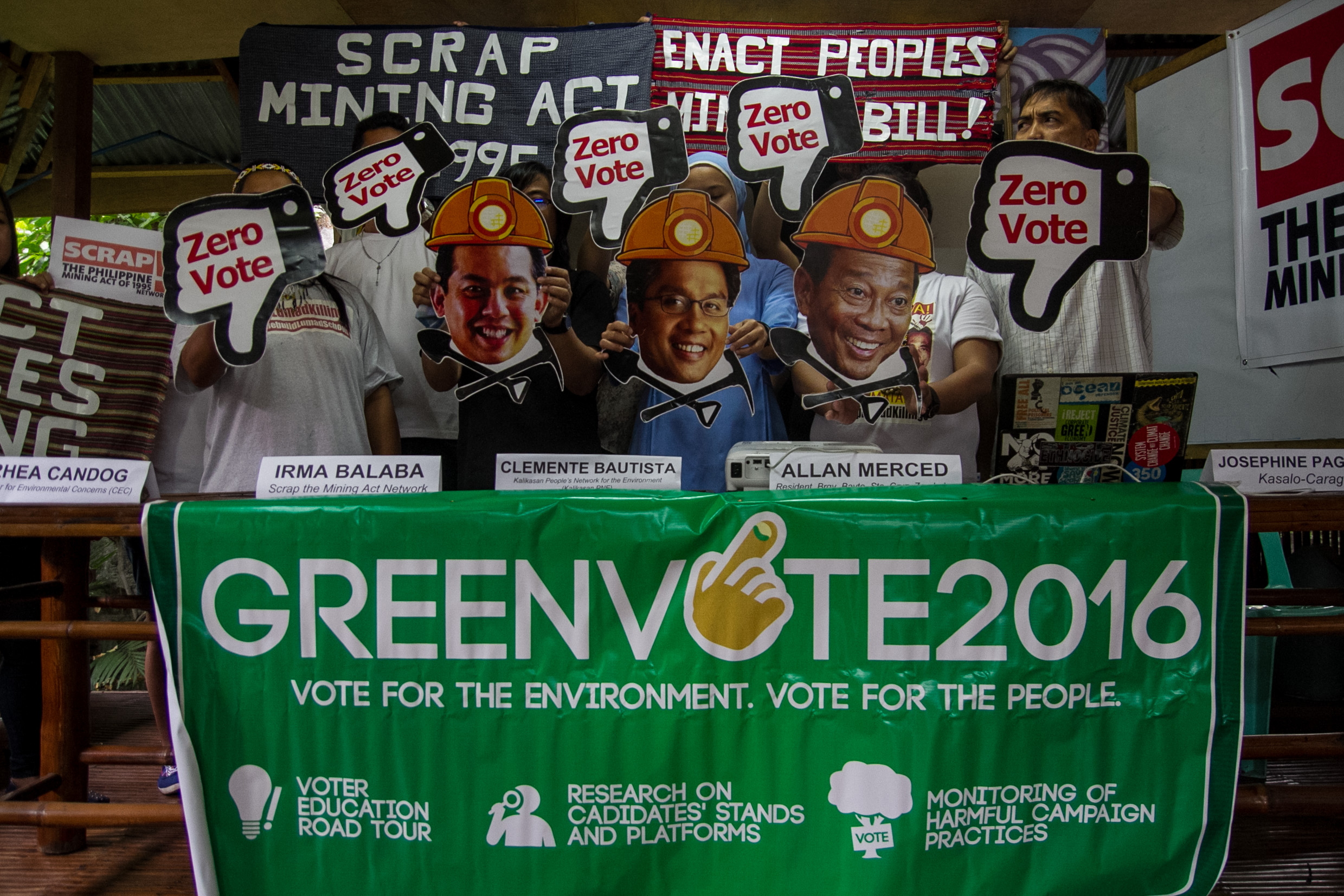 MANILA, Philippines (3rd UPDATE) – Environmental groups on Tuesday, March 1, urged voters not to elect candidates with business interests or involvement in mining operations in the Philippines.

In a press conference, the groups singled out 3 candidates for national positions who have ties to mining interests: presidential candidates Manuel Roxas II of the Liberal Party (LP) and Vice President Jejomar Binay of the United Nationalist Alliance, and senatorial candidate Leyte Representative Martin Romualdez.

They, however, did not mention presidential candidate Davao City Mayor Rodrigo Duterte and his running mate Senator Alan Peter Cayetano, whose campaigns are backed by families with mining companies.

Clemente Bautista, national coordinator of the Kalikasan People’s Network for the Environment, called on candidates to go beyond motherhood statements and express a clearer, firm stand on mining.

The groups are calling on policy makers to repeal the Philippine Mining Act of 1995, and instead enact an alternative mining law that they said would better serve the public’s interest.

Roxas’ rival for the presidency, Duterte, recently accused the LP bet of protecting SMRI. The controversial mining firm had been fined P7 million in 2007 for over-extraction of nickel ore in Tubay, Agusan del Norte.

SRMI was also the subject of attacks by Senator Nancy Binay, daughter of the Vice President who filed a Senate resolution seeking an investigation into the issue.

Gutierrez, whose private planes Roxas uses for campaign sorties, is also a friend of LP stalwart Caloocan Representative Edgar Erice. Erice used to be the chairman and president of SRMI.

The environmental groups are also campaigning against Romualdez, who served as chairman of Benguet Corporation, the oldest mining corporation in the country.

His brother, Benjamin Philip Romualdez, is the chief executive officer of Benguet Corporation and is the president of the Chamber of Mines of the Philippines.

Meanwhile, Binay was criticized for his statements “that generally subscribed to the concept of ‘responsible mining’ floated by the large-scale mining industry.”

In a 2015 mining conference, Binay said he is open to the promotion of “environmentally and socially responsible mining, adopting the constitutional principle of balancing interests over the long-term.”

He also cited the mining industry’s potential to become “the biggest contributor to the Philippine economy,” and said that mining taxes should be fair and consistent with international standards.

Aside from Romualdez, senatorial aspirant and former senator Richard Gordon was also cited for his ties to Atlas Mining.

How about Duterte and Cayetano?

The environmental network did not cite Duterte, who enjoys the support of members of the Alcantara family. They own Alsons Consolidated Resources Incorporated, which has interests in mining.

Bautista lauded Duterte for banning mining activities in Davao City. But he noted that the presidential candidate has recently said he would support mining as long as it follows environmental standards.

Asked about the mining interests of the Davao mayor’s backers, Duterte’s spokesperson, Peter Lavina, said: “They are a highly diversified group. In Davao City their main business is real state and property development. They do not have any mining operations here.”

He added, “While they are supportive of the mayor, we have not received any financial support from their corporations. If any individual member of the Alcantara family gives any financial contribution, I am certain that this would be reported to the Comelec (Commission on Elections at the proper time.”

As for the other presidential bets, Bautista noted that none have expressed any strong stance or clear action plans.

Senator Grace Poe, in a 2014 event, said she is open to responsible mining but also called on mining firms to be more transparent about their operations.

Ibarra Gutierrez, the spokesman for the ruling coalition, took exception to the allegations of Kalikasan People’s Network for the Environment. He said presidential bet Roxas’ “firm stance on environmental protection is on record.”

He also accused the network of fronting for presidential candidate Grace Poe and her running mate Francis Escudero.

“The groups and individuals cited are affiliated with the Makabayan bloc, which is in alliance with the Poe-Escudero camp. It is not surprising that, in the guise of promoting an environmental agenda, these groups will attack the rivals of their political patron and ally,” Gutierrez told Rappler.

“Secretary Mar is not affiliated with any ongoing mining concern, contrary to the propaganda being peddled by these Poe supporters,” he said.

Bautista said that without changes in the law, politicians’ support for “responsible mining” are just flowery promises.

Bautista clarified that the group does not oppose mining on the whole, but wants policy makers to repeal the current Mining Act of 1995, which allows foreign ownership of mining assets and exploration permits. (READ: 9 things you need to know about mining in Philippines)

The group, along with the Scrap the Mining Act Network, is pushing for an alternative People’s Mining Bill, which they said would protect the rights of Filipino mining workers, local communities, and state interests. – Rappler.com