Grace Poe in Pampanga: FPJ didn’t raise me to be ‘vengeful’ 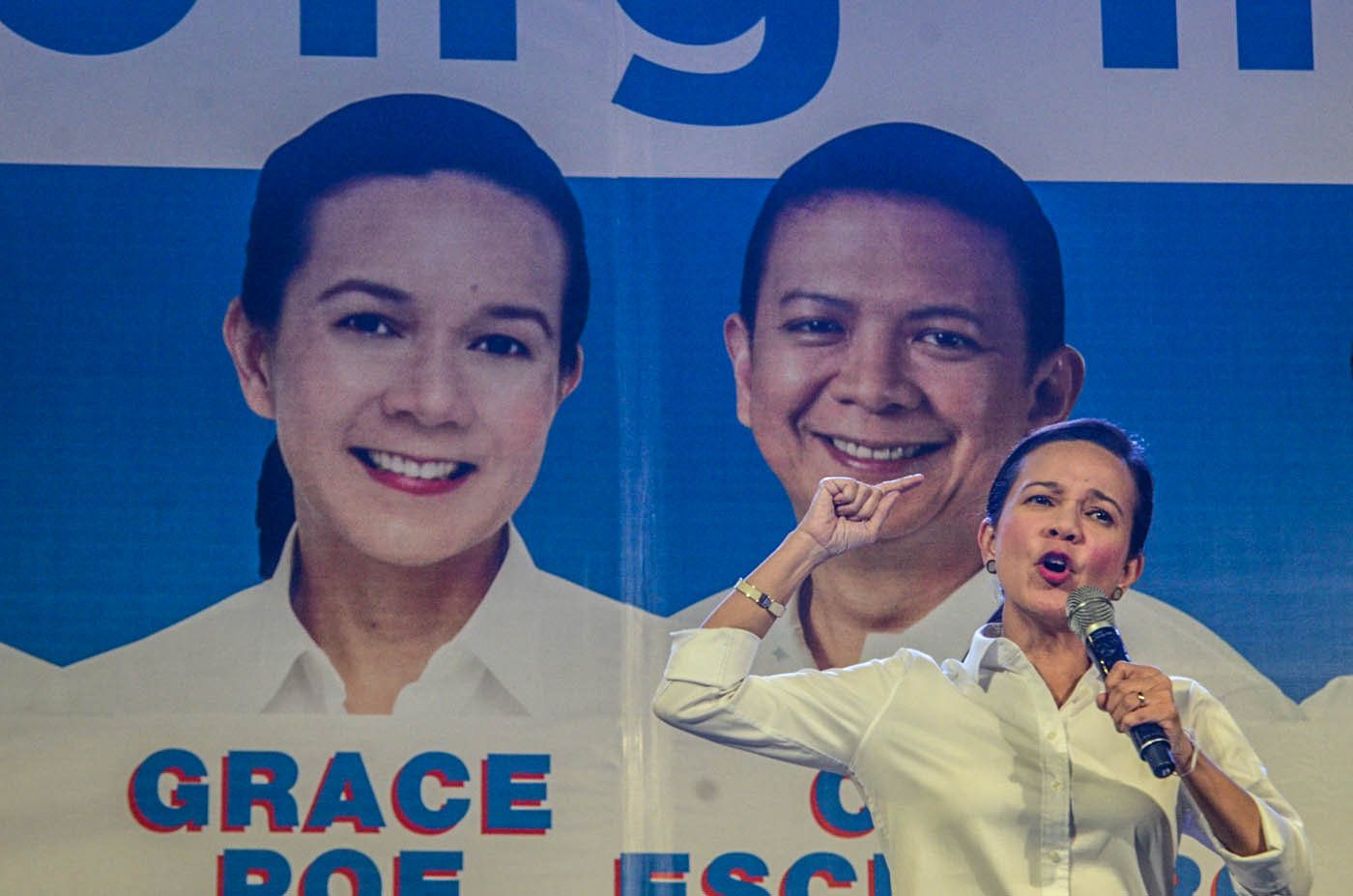 It was Poe’s 3rd time to visit Pampanga, the 11th most vote-rich province, with more than 1.2 million voters.

Poe did rounds in Apalit and in the cities of San Fernando and Angeles. Together with running mate Francis Escudero and several senatorial bets, she held consultations with locals and students.

As in past sorties and campaign rallies, Tuesday’s rally would not be complete without Poe mentioning her father, the late action star Fernando Poe Jr – even in the bailiwick of Arroyo, who allegedly cheated her father in the 2004 presidential polls.

Poe told voters that her father taught her not to be “vengeful.”

(We don’t have any color, be it yellow, red, or blue because all Filipinos, from whatever part of the Philippines, no matter how far or whether you’re a political rival, we will help all those in need. My father did not raise me to be vengeful.)

The neophyte senator earlier said she would let doctors and courts decide on the case of Arroyo, who remains in jail for plunder cases.

In 2005, Poe returned to the country from the United States and was a key personality in anti-Arroyo protests, especially after the “Hello, Garci” controversy, wherein Arroyo was allegedly heard ordering an elections commissioner to fabricate votes in her favor. (READ: TIMELINE: Grace Poe citizenship, residency)

Poe also cried foul over persecution against her. She hit her critics, including the Commission on Elections, for disqualifying her over citizenship and residency issues. (READ: All memos in: SC to decide on Grace Poe case soon)

(My father taught me…he really dreamt for every Filipino to have access to equal justice and opportunity. Fellowmen, I, a sitting senator, is being oppressed by the Comelec just like that. How much more ordinary Filipinos? That will not be allowed in our new system.)

Despite all these, Poe maintained she does not lose sleep over issues against her.

(To all of you, thank you. You know, others will make a lot of issues. But this I can say to you, even if we have problems, as long as we can still sleep soundly at night, we don’t fear anyone because we did not step on anyone.)

(I know you are all wishing for enough work and income here in Pampanga. We have many plans for you. First of all, the Clark Airport, we will utilize it 100%  so many people and tourists will come here, many investors will come in, and more work will be created for you.)

Poe also vowed the construction of more flood control projects, as Pampanga is one of the provinces persistently facing flood threats during typhoons, with some homes submerged in floodwater for weeks and months.

(Many of you are troubled because, during the rainy season, your houses are submerged in floodwaters for many weeks. We talked to the local government and we need to build flood control wall and water catchment facilities so your baranggays will no longer be flooded.)

The neophyte senator also vowed to continue and expand the Conditional Cash Transfer program of the current administration to include more beneficiaries and more forms of assistance. – Rappler.com