Pulse Asia however explained there are “no significant changes in voter preferences” of the vice-presidential candidates between January and February 2016.

In a statement, Marcos welcomed the results, saying, the latest survey is a “reaffirmation that our message for national unity is being accepted by the Filipino people as well as a reflection of the increasing clamor for genuine change through  unity.”

He continued, “But there’s still a lot of work to be done before the real survey – the elections in May. We will strive harder to deliver our message to our countrymen, especially our less fortunate brothers and sisters.” 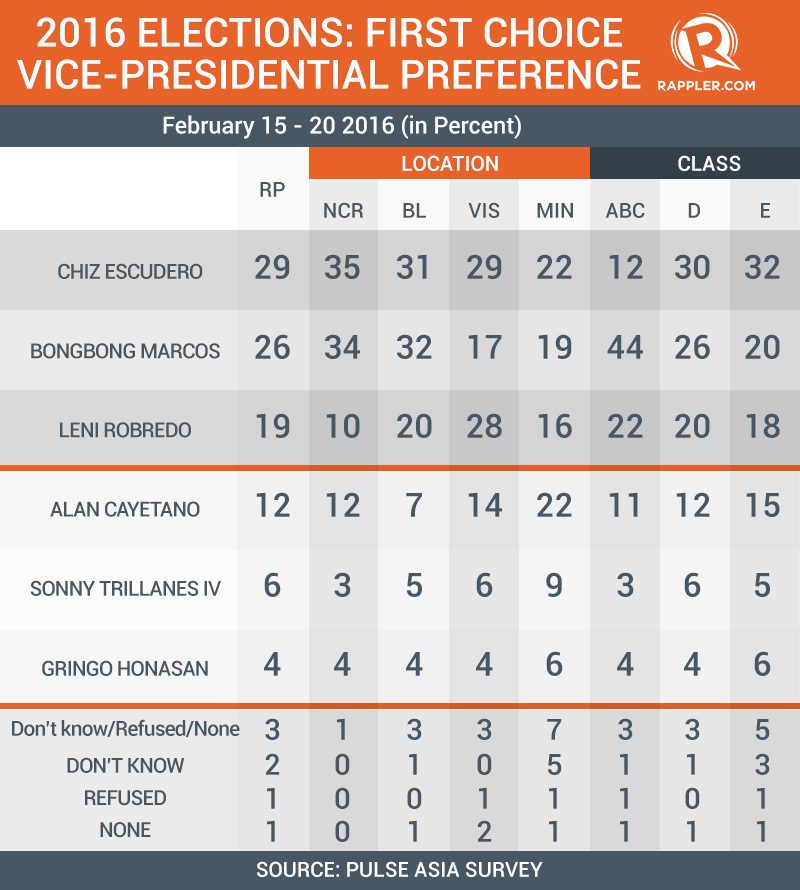 Just recently, on March 2, after Marcos Jr said historians, not politicians, should judge his father’s regime, professors of the Ateneo de Manila University said they oppose the “ongoing willful distortion of our history.”

They deplored “the shameless refusal to acknowledge the crimes of the Martial Law regime” and said they “reject the revision of history, disturbing vision of the future, and shallow call for ‘unity’ being presented by Marcos Jr and like-minded candidates in the 2016 elections.”

Liberal Party and administration candidate Leni Robredo ranked behind the two top contenders, gaining one percentage point from her previous 18% in January. Senator Alan Peter Cayetano got 12%, lower than his previous 14%.

Other vice presidential candidates remained at single digit percentages: Senator Antonio Trillanes IV with 6% (up from 4%), Senator Gringo Honasan with 4% (lower than his previous 5%).

Pulse Asia said the rest of Filipino registered voters (3%) in the February poll “still do not know whom they will elect to the vice-presidential post/refuse to name their chosen candidate/are not voting for any vice-presidential candidate.”

Both candidates are also popular among Class D (30% and 26%, respectively), which constitutes the bulk of Filipino voters.

Pulse Asia said that the unchanged voter preference from January’s survey holds true not only at the national level, but in different geographic and socio-economic classes as well.

“Even the double-digit changes in voter preferences of Senators Escudero and Marcos in Class ABC are considered marginal” as they fall within the error margin, Pulse Asia said. – Rappler.com