The Scrum: Why Bongbong Marcos might win as VP 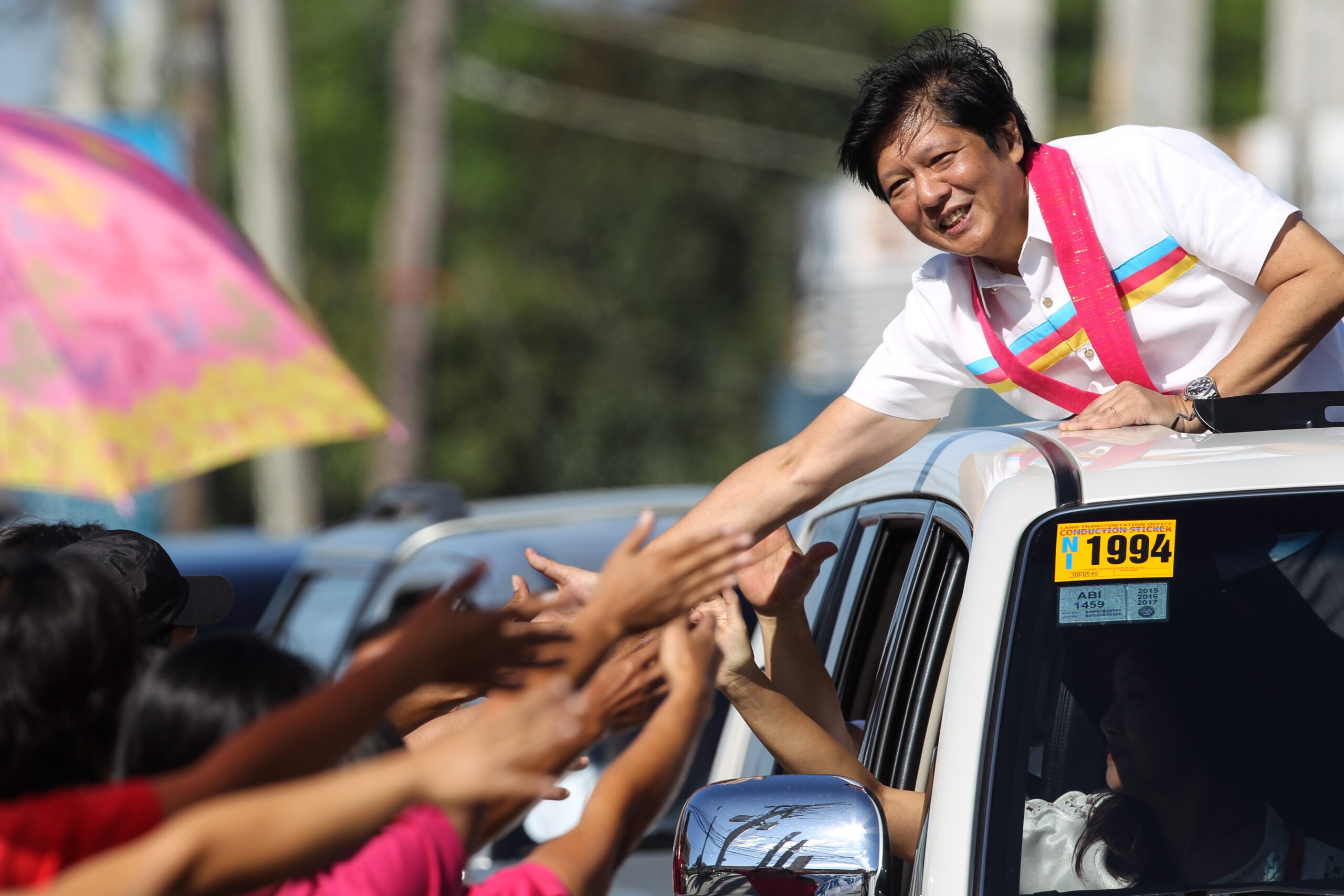 He’s got the numbers and the organization, not to mention the money. That’s the short answer.

The long answer, I hope, will make his haters understand why press statements, social media posts, and the #EDSA30 high will not be enough to keep him away from the seat next to Malacañang.

In a year’s time, the poll ratings of the son and namesake of ousted dictator Ferdinand Marcos rose from 3% (March 2015) to 26% (February 2016), according to Social Weather Stations. Two months into election day, he is tied at Number 1 with fellow senator Chiz Escudero, who had previously cornered the top spot in the first 5 of the 7 SWS pre-election surveys.

When victims of human rights violations during martial saw the latest numbers, they launched an anti-Bongbong campaign with an acronym that sounds like a person reaps what he sows. The coalition vows to “haunt” Marcos Jr with the ghosts of his father’s regime – and, by God, there are legions of these – every chance they get.

They will be in the vicinity of his campaign sorties, they will post disturbing proofs of torture and poverty and plunder, they will educate through forums, they will chant at rallies.

There are major flaws in their strategy.

They are starting this too late in the game. Bongbong plotted his war plan way ahead of them.

As early as January 2015, an insider told me, his eldest sister, Ilocos Norte Governor Imee Marcos, gathered Kabataang Barangay leaders and organizers to prime them for Bongbong’s 2016 bid. For those too young to know, the KB was the forerunner of the Sangguniang Kabataan – but with a better leadership training design.

A number of these KBs are now in position to influence voters in national and local government offices, in non-governmental organizations, in universities; not a few have the ears of senatorial, congressional, and local candidates who either consult them or whose campaigns they are running.

On election day, these KB alumni will spell the difference between the survey respondents who tell interviewers in the comforts of their homes that they will not vote for Bongbong, and the voters who will actually cast their ballot for Bongbong if ward leaders – the KBs’ connections in the field – will convey them to polling precincts.

He’s got the numbers

Early last year, the Marcoses did not agree on whether Bongbong should run for president or vice president, but they were sure about where to anchor his campaign. An internal survey studied by strategists close to the family showed that around 56% of Filipino voters think the Philippines was in a better place during the administration of the senior Marcos.

“Kaya paninindigan niya ang tatay niya kahit may mga bumabatikos (That’s why he will dig his heels in when it comes to his father). He knows he has the numbers,” one of these family friends said.

When he finally announced he was running for vice president, his numbers in SWS polls shot up to 24%, from just 7% more than two months before that.

When the anti-Bongbong campaigners were asked if they would throw their support behind a common VP candidate, one of the organizers emphatically said no. It is clear to them, she said, that their agreement is only on working against Bongbong Marcos, but they are free to support which other bets they choose. That’s a big problem.

What do we like to say when people criticize or tear down an idea? Propose an alternative. That definitely applies to elections: those who are not voting for Bongbong Marcos are split among 5 rivals; those who intend to vote for Bongbong Marcos have consolidated enough to carry him to the top spot in surveys.

If the anti-Marcos vote does not rally behind a single candidate, then Bongbong will run away with the elections.

Did we say Bongbong has the wherewithal? His family’s alleged ill-gotten assets have either been frozen or confiscated, yes, but we know that the Presidential Commission on Good Government has yet to find or recover much more.

These advantages cannot be reversed in a couple of months by making noise in the media and holding pockets of rallies. A speech by an Aquino about sins of the past being repeated, or a senator’s lament about a vote that exposes low moral standards, will have to be on loop – but not without a convincing defense of why succeeding administrations also faltered, and why this Marcos did better in the Senate than the Aquino who’s criticizing him now.

But here’s what the anti-Marcos movement can do:

Of his 5 rivals, only two are in a position to match Bongbong’s numbers in a tight timetable: Chiz Escudero and Leni Robredo – both from the vote-rich region of Bicol.

Alan Cayetano is just a few percentage points behind Robredo, but he has to deal with the effect on public perception of his presidential candidate Rody Duterte indicating he favors Bongbong Marcos as vice president. We await how this will be reflected in the numbers in the next survey.

In the last SWS and Pulse Asia surveys, Escudero and Marcos are practically tied for the top spot; in the Laylo survey of early February, Escudero was still Number 1 but Marcos was closing in.

In the polls of these 3 firms, though, a common pattern is how Robredo’s rise has been consistent. Like Bongbong Marcos (and Cayetano), her 3% in SWS rose to double digit 12% when she made official her vice presidential bid. While her increases have not been dramatic in every poll, they are steady.

One interesting bit in the SWS polls is that, between the September and December surveys, when Marcos and Cayetano saw their ratings drop and Escudero registered an unchanged figure, Robredo was the only one who gained. The Laylo survey in February also noted the “biggest improvement” in Robredo’s numbers.

The next consideration will be: who has the machinery?

Escudero is an independent, endorsed by the Nationalist People’s Coalition, whose members have been allowed to choose their own bets anyway; Robredo has the Liberal Party and its allied organizations. We see the movements of volunteer groups with organized plans and activities for Robredo; we want to hear of a coordinated volunteer campaign for Escudero.

On May 9, these organizations will show that it is one thing to have survey respondents sought out by interviewers to say they would vote for Escudero, and another to have voters get out of their houses and translate that preference to actual votes.

If – and this is a big if – the Supreme Court suddenly decides to disqualify Escudero’s standard-bearer Grace Poe, then we expect his numbers to drop (although maybe not to as low as the numbers of Sonny Trillanes, who didn’t have a presidential candidate from the start).

As for funds, these two alternative candidates have moneyed backers: Escudero has at least two big businessmen openly helping him; Robredo has President Aquino and, let’s not kid ourselves, the government. You decide whose kitty is formidable.

The last battleground for the viable alternatives to Bongbong Marcos is identifying and communicating their strengths – matching or contrasting these with those of the dictator’s son. There is rich data that campaign strategists can mine in Laylo’s survey alone, where the reasons for voting and not voting for each VP candidate are broken down.

A major strength of Bongbong which is not measured in surveys is his familiarity with the local government sector. A former provincial governor, he has, in my view, done a good job as chairman of the Senate committee on local governments. When he discusses provinces and cities and towns and barangays, you can tell he has a good grasp of how they work, what they need, what they want. He can talk to the locals.

So can Robredo. A lawyer, she worked with advocacy and grassroots groups for decades while her husband was a city mayor who produced results. In small-town forums and in big rallies, she tells her story in a way that arrests the attention of voters who have barely heard of her before. Her platform reveals a practical understanding of how local governments can be empowered.

As for Escudero, he has been a lawmaker all his political career – congressman of Sorsogon for 9 years, and now second-term senator. This is his first venture into an executive position.

“The Scrum” is Rappler’s take on issues and personalities of the 2016 elections. Derived from a media term that refers to reporters surrounding politicians to press them to answer questions and respond candidly, “The Scrum” hopes to spark smart conversations on politics and election.