MANILA, Philippines – In the 2010 presidential race, at least one candidate, Benigno Aquino III, already had a 7% lead over his closest rival as the campaign period entered the month of March that year. But the 2016 race that Aquino still wants to win through his chosen bet is a different story of unsteady numbers and constantly shifting choices.

Last week’s events indicate that the presidential campaign teams are aware of how tight the election is, the soundbites of their candidates notwithstanding. They’re giving no quarter in the hustings, and looking beyond vote-rich provinces to court votes.

Based on the February 24-March 1 Laylo poll covering 3,000 respondents from 79 provinces and all cities in Metro Manila, the numbers look as fickle as this: Grace Poe: 26%; Rodrigo Duterte: 24%; Jejomar Binay: 23%; and Manuel Roxas II: 22%. Miriam Defensor-Santiago is too far to be in the race at this point: 2%.

But the biggest gainer in the Laylo polls, Duterte, might be having some problems in the home front. 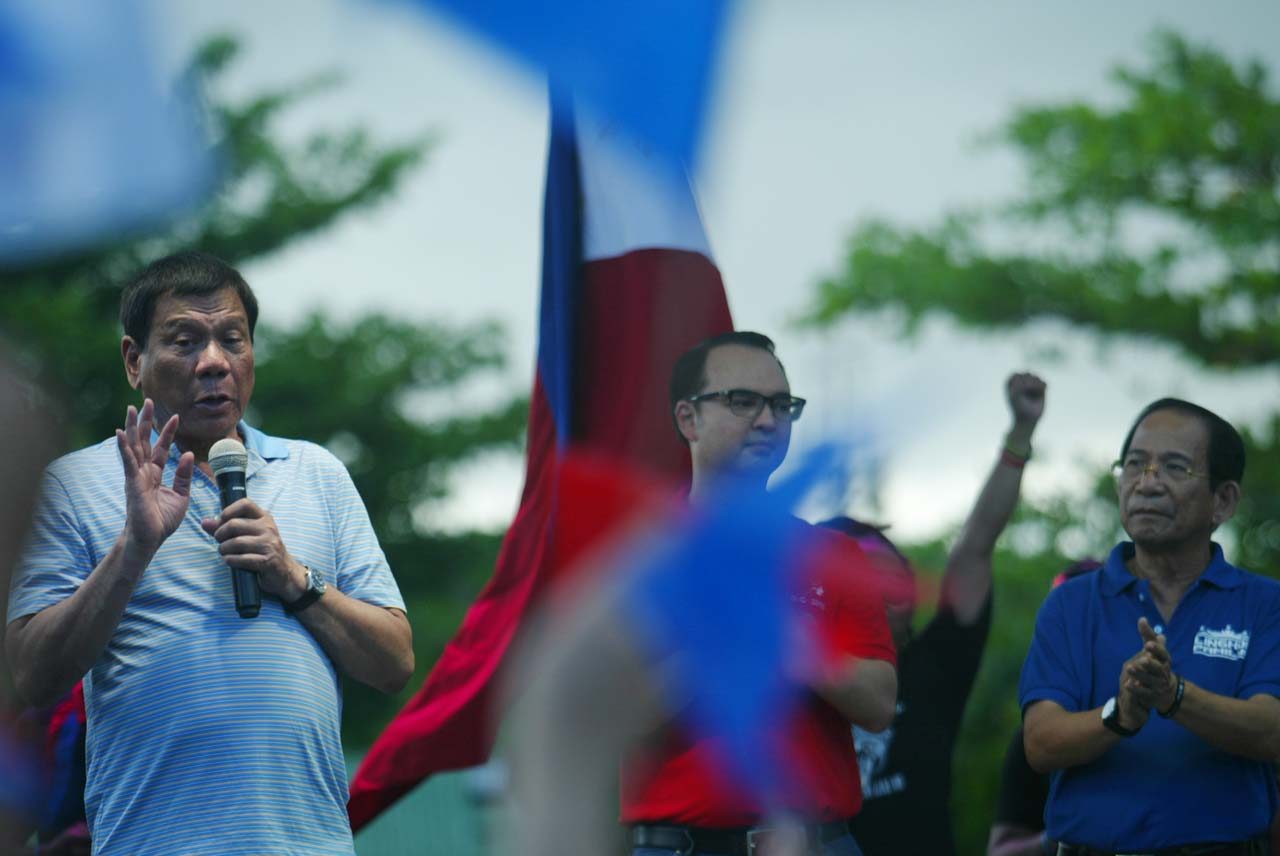 It is akin to a lovers’ spat, and it was palpable last week when Duterte and his running mate, Senator Alan Peter Cayetano, campaigned in Bongbong Marcos’ turf, Vigan, Ilocos Sur. Cayetano was unusually quiet in Vigan, not giving any speech and refusing to talk to reporters as he gestured that he had a sore throat.

The cold treatment from Cayetano is likely due to his standard-bearer’s frequent visits to the Ilocos region, his statements favoring a heroes’ burial for the late dictator Ferdinand Marcos, and the fact that Duterte was really Bongbong’s first choice as presidential candidate. (READ: The Scrum: Why Bongbong Marcos might win as VP)

Can Poe grab the lead in Mindanao? Because she is weak in Mindanao, ironically the political bailiwick of her late father, Fernando Poe Jr, Senator Poe spent time in Zamboanga City last week. Pulse Asia’s February survey says Poe is just 15% in Mindanao, behind Duterte, who’s from Mindanao, with 45%, and Binay with 21%. Poe attributed this to her few sorties in the region. She’s going back to the Zamboanga Peninsula, in Zamboanga del Norte, to press more hands. (READ: Campaign trail: March 7-13)

The Supreme Court is expected to decide on the disqualification cases against her this week, and her camp is hoping that a verdict in her favor would make her break free from the dead heat race and give her a comfortable lead.

Roxas not playing safe in Cebu While he won big in Cebu in his failed 2010 vice-presidential bid, Cebu is playing out differently this time. Duterte is the preferred bet in the province, and Poe’s campaign manager, Ace Durano, belongs to an influential Cebuano clan. (READ: Can Mar Roxas win Cebu anew?)

Some of the Liberal Party’s local allies are also threatening to leave the ruling coalition due to unresolved local disputes. The cat is out of the bag. The political lieutenants of former President Gloria Macapagal Arroyo, who’s under hospital arrest for charges of plunder, said that the “marching order” from her is to support Binay’s presidential bid. In February, Binay backed Mrs Arroyo’s petition for a house arrest, and this “reverberated” with Arroyo’s fellow Kapampangans, said an Arroyo aide.

Binay and Arroyo used to be political foes. He was among Arroyo’s staunchest critics over corruption scandals and allegations of election fraud in 2004.

Pacquiao gets a beating

And as the ultimate proof of how words can make or break a campaign, Manny Pacquiao was nearly pushed out of the winners’ circle in the February survey of Pulse Asia, which was conducted on the week he faced massive backlash from his sensational statement on gay marriage. Pacquiao’s preference rating dropped by 12.1 percentage points to 34.8%, pushing him down to 11th to 14th places, the tail end of the so-called “Magic 12.”

Just type #PHvote with your presidential candidate’s surname (no space), and his or her emoji will automatically appear. Try it now! – Rappler.com