Mar 8, 2016 1:19 PM PHT
Bea Cupin
Facebook Twitter Copy URL
Copied
Asks Mar Roxas: 'Is there a rule that says she can't travel and campaign for her husband? What's the issue?' 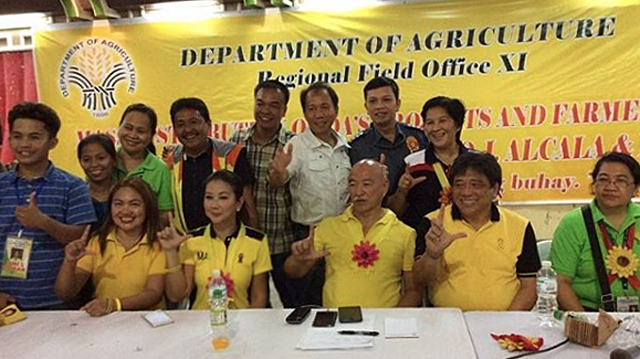 “What are you trying to tell me,” a visibly piqued Manuel Roxas II asked a reporter on the sidelines of a campaign sortie in Kapalong town in this province on Tuesday, March 8. “Are you saying that my wife is using [the Department of Agriculture]? First of all, she used a private vehicle. Second, she was invited [to the event]. Are you saying that she should not go where she is invited? Maybe you’re just making an issue out of it. It’s a non-issue.”

The administration standard-bearer was responding to reporters’ questions about allegations that his wife, broadcaster Korina Sanchez-Roxas, has been using DA events and programs to campaign for him.

“Is Korina employed by the DA? Why is she the one giving the checks to the farmers? Korina is now an accomplice in a systematic shameless act that conditions the electorate to accept doles in exchange for votes,” Duterte’s spokesman Peter Laviña said.

(Is there a rule that says she can’t travel and campaign for her husband? And what’s the issue? She’s campaigning for her husband. Is that wrong or right? Is it illegal? So what’s your question?)

Roxas insisted it’s a non-issue. A reporter quipped that it’s a usual accusation on social media.

Roxas’ spokesman Akbayan Representative Ibarra Gutierrez earlier told Rappler that Sanchez-Roxas is a “regular invitee” of Alcala to be a guest in his department’s events for fishermen and farmers.

Gutierrez explained that Sanchez-Roxas “is only there as guest speaker in these events and does not physically distribute the DA subsidies given to the farmers and fishermen.”

“She has been to several of these DA events and at no time did she hand out cash or kind to any of the participants in these events. In Pampanga recently, she was requested by Governor Lilia Pineda to join the recipients on stage for a celebrity photo-op,” added Gutierrez.

Rappler asked Alcala to comment but did not get a reply as of posting.

The LP standard-bearer and his wife have been married for over 7 years. She’s been a constant presence in his campaign, doing her own rounds in the provinces to court votes for Roxas. – Rappler.com