Lifestyle check on candidates? My records are open, says Roxas 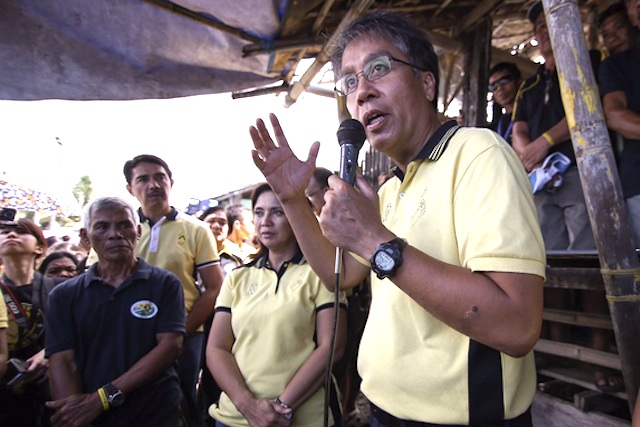 CAVITE, Philippines – Liberal Party (LP) standard-bearer Manuel Roxas II said he was open to a lifestyle check on candidates, following a report on the billions spent by presidential candidates on political ads, so far, in the 2016 campaign.

Calls for a lifestyle check on candidates were prompted by reports on their political ad spending even before the official campaign period began on February 9.

The Philippine Center for Investigative Journalism (PCIJ)’s Malou Mangahas wrote in a special report, “At the rate they are splurging billions of pesos on political ads, with nothing or little to show in their asset records as their own spending capacity, the candidates for president and vice president in the May 2016 elections are possibly the least smart amongst us when it comes to math and money.”

Based on Nielsen Media’s monitoring reports, United Nationalist Alliance standard-bearer Vice President Jejomar Binay and Senator Grace Poe have already spent over a billion pesos worth of ads as of January 31, 2016. Roxas followed closely with just under a billion pesos.

Another presidential candidate, Senator Miriam Defensor Santiago, recently called on presidential bets to undergo a lifestyle check, given the ad spendings which exceeded their declared net worth.

“They spent at least 5 times the net worth they have declared for ads. One candidate even spent by 17 times his net worth. Where did they get the money? If the public is to speculate, they would think that these candidates have either stolen from public funds or peddled their influence,” Santiago said in a statement.

Asked for his ad fund sources, Roxas said it’s a mix of “personal” money and “donations of friends.”

Roxas is worth over P200 million, according to his most recent disclosure.

Other candidates’s net worth in 2014 are as follows: