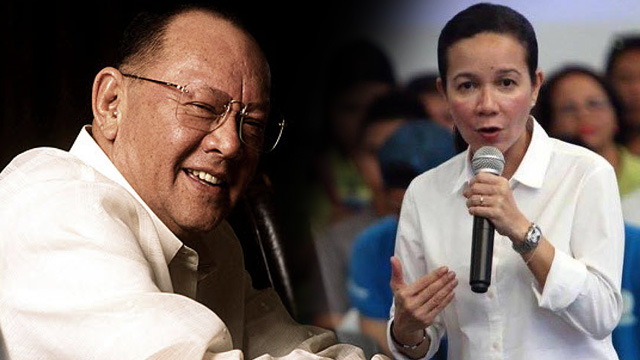 (Senator Grace can stand on her own and she has shown that. She does not need any backer to fight for what she thinks is right and to do what is right for the country.)

The tandem received flak for their comments clearing Cojuangco from responsibilities on the release of coco levy funds. The camp of Davao City Mayor Rodrigo Duterte called Poe a “lapdog” and “puppet” of Cojuangco. (READ: Poe, Escudero: Gov’t, not Danding, should settle coco levy issue)

The coco levy funds are the taxes imposed on coconut farmers, among the poorest in the country, during the Marcos regime. The funds, intended for the development of the coconut industry, were used by Cojuangco to buy certain businesses such as the United Coconut Planters Bank and San Miguel Corporation (SMC). (READ: The San Miguel – coco levy saga)

Cojuangco is the founder of the Nationalist People’s Coalition – the second largest political party – which recently endorsed the tandem. Poe also earlier revealed that they are borrowing private aircraft from SMC.

Escudero hit back at critics and questioned their motives. After all, he said, the top 4 presidential bets all sought the party’s support.

(All presidential candidates sought the NPC’s endorsement. No exception. Secretary Roxas, Mayor Duterte, Vice President Binay, also Senator Grace. Now that NPC endorsed Senator Grace, suddenly there are interests behind her, she’s now a puppy. What if they were endorsed? Could they say the same thing?)

Poe, for her part, claimed news headlines on her coco levy comments were “misleading” and asked her opponents’ camps to be “responsible” in their statements.

(Just a request to other camps’ spokesmen to be responsible in their comments and read very well the transcript or what the candidate actually said. Sometimes the headline is misleading. You have to go beyond the headline.)

The senator, however, stood by her earlier claims – that Cojuangco has no more business in the release of the disputed funds and that it is the government’s duty to act on it.

(The portions of the funds from my alleged backer have long been surrendered. They should not speak like that. They know, if they are really good, they would understand that even then, he has no hold on that and the money have long been tied to a single trust fund.)

Critics  have pointed out Poe’s failure to mention that Cojuangco is primarily to blame for the legal disputes that delayed the release of the funds to the beneficiaries. (READ: Danding, coco levy mess rile up Poe, Roxas camps) – Rappler.com