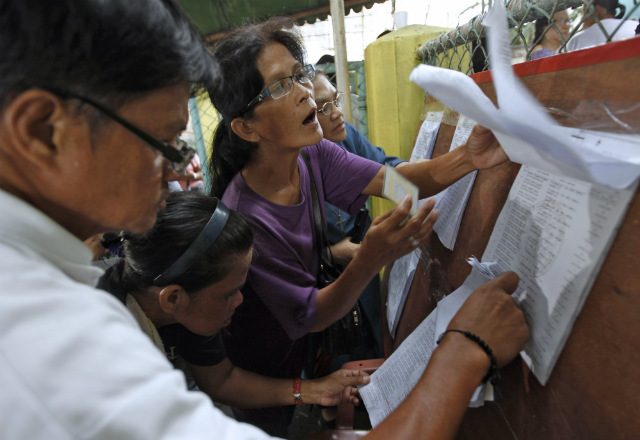 MANILA, Philippines – The Commission on Elections (Comelec) has warned that the May 9 elections could spill over to the wee hours of the next day, May 10, if it will issue voting receipts as ordered by the Supreme Court (SC).

In a resolution publicized on Friday, March 11, the Comelec said this would be the effect of at least 4 new steps involving receipts, as well as a new verification feature.

“Taking into consideration both the novelty of these steps and the number of voters per precinct, these changes are expected to extend the voting period to more than 20 hours,” the Comelec said, based on its emergency meeting on Wednesday, March 9.

This means voting could last until at least 3 am on May 10.

Voting hours had originally been set from 7 am to 5 pm, without factoring in the voting receipts.

The Comelec said that aside from the new steps, another possible cause of delay is the expected 20% chance of paper jams and printer failures related to the receipts. The poll body said this “will entail another 5 minutes of delay per machine for every shutdown.”

These changes come after the SC ordered the Comelec to issue voting receipts.

The SC was acting on the petition filed by senatorial candidate Richard Gordon and his political party, Bagumbayan, to compel the Comelec to issue voting receipts.

The Comelec now finds itself in a state of emergency, which has forced it to cram 5 months of preparations into only 60 days.

In its March 10 resolution, the poll body explained that voting receipts “will predictably lead to longer queues and voter stress at the polling stations.”

The Comelec enumerated the 4 new steps that each voter would need to take:

These 4 steps don’t include other possibilities, which the Comelec has explained in previous interviews.

This could create chaos in election precincts.

Other possibilities include voters deliberately contesting the voting receipts on baseless grounds.

Politicians, for one, could instruct their supporters to lie and claim they were cheated based on their voting receipts.

At the same time, election officials fear having to extend the voting period until late in the evening.

They say this would make the elections vulnerable to violence, and election inspectors would also be sleepy by then.

Three consecutive batches of Comelec officials – under former chairmen Jose Melo and Sixto Brillantes Jr, and current chairman Andres Bautista – have unanimously rejected voting receipts. They have all cited not only the long voting period needed, but also the possibility that politicians would use receipts for vote-buying. (READ: EXPLAINER: Why it’s alright not to have voting receipts)

Now the Comelec is warning that “there will be insufficient time to complete preparations for orderly and credible elections” this year. – Rappler.com