No ouster threat vs Ombudsman in Binay presidency – UNA 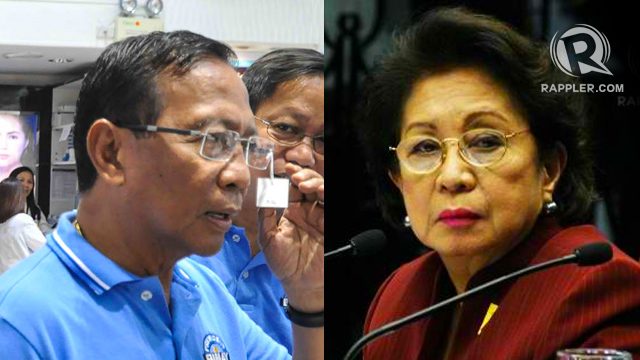 Facebook Twitter Copy URL
Copied
'President Binay will be too busy helping the poor to even think of this,' says UNA president Toby Tiangco

ILOCOS SUR, Philippines – The United Nationalist Alliance (UNA) on Wednesday, March 16, belied the claim of Ombudsman Conchita Carpio Morales that she had received an ouster threat from the camp of Vice President Jejomar Binay.

“We categorically deny the claim of Ombudsman Morales that the Vice President has threatened to have her removed from office when he becomes president,”  UNA president and Navotas Representative Toby Tiangco said in a statement on Wednesday, March 16.

“President Binay will be too busy helping the poor to even think of this,” Tiangco added.

Tiangco’s statement comes after Morales told reporters on Wednesday that she received threats from Binay coursed through a “valued ally.”

Five days ago, Morales alluded to the Vice President when she said she has received a “threat to her person” following the release of a Commission on Audit Report finding Binay liable for graft and corruption over the alleged overpricing of the Makati City Hall Parking Building II.

The Ombudsman had also found probable cause to indict Binay, who was Makati local chief executive, his son dismissed Makati mayor Jejomar Erwin “Junjun” Binay Jr, and other former city hall officials in relation to the said city infrastructure project.

The younger Binay and the ex-city hall officials are already facing charges of graft and falsification of documents before the Sandiganbayan.

Tiangco challenged Morales to identify who from their camp threatened her.

“The Ombudsman said the supposed threat was made by an ally of the VP and not the VP himself. We ask her to name the person who threatened her so that we can legally deal with this person,” he said.

Corruption allegations continue to hound Binay in the midst of the campaign season.

His camp cried foul over a recent Inquirer report alleging that he used funds from several Makati city projects to finance his vice presidential bid in 2010, dismissing it as part of “orchestrated efforts” to derail his presidential campaign. (READ: Binay camp to Inquirer: See you in court, again)

Binay and his allies have criticized Morales for “selective justice” and for being on “remote control” of the ruling Liberal Party, which the Ombudsman had vehemently denied.