Poe to push for changes in Constitution’s economic provisions 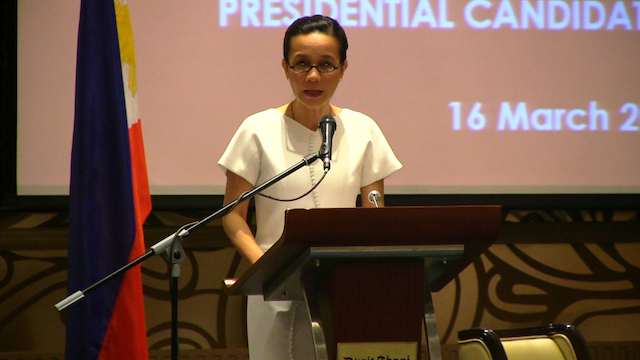 MANILA, Philippines – Presidential candidate Grace Poe on Wednesday, March 16, said she is “absolutely” in favor of amending certain economic provisions of the 1987 Constitution, vowing to make it part of her agenda during her first month in office if elected.

“I am for certain amendments in our economic provisions, but I think that we should also safeguard certain things in our Constitution,” Poe told hundreds of businessmen during the 2016 Presidential Dialogues hosted by the Makati Business Club and the Management Association of the Philippines.

She said amending the Constitution should be done at the beginning of a president’s term, but she vowed to do it on her first month in office. For now, she said, she is for lifting the economic restrictions of the Constitution.

One of the provisions she wants amended is the ownership of corporations in the country.

“We need to be able to encourage more manufacturing in our country. Why not allow more foreign ownership on that, for as long as they employ Filipinos, and then there’s also a technology transfer?” she explained to reporters after her speech on Wednesday.

“I am not for land ownership. But I am for, let’s say, for media, for certain utilities, for academic institutions and also for the medical profession. I think that we should have reciprocity when it comes to the different professions in our country,” she said.

But Poe said there are provisions in the Constitution that should not be touched.

“All of these possible proposals for charter amendment should be done early on, and I don’t want to touch certain provisions like the Bill of Rights, or the ones that will extend term limits for public officials,” she added.

Poe is not the only presidential candidate that has expressed support for amending the Constitution’s restrictive economic provisions.

As early as 2015, Senator Miriam Defensor Santiago said the economic provisions must be liberalized. She also wants a referendum to study how best to amend the Constitution to increase the Philippines’ foreign direct investments, and make it at par with the FDIs of neighboring economies.