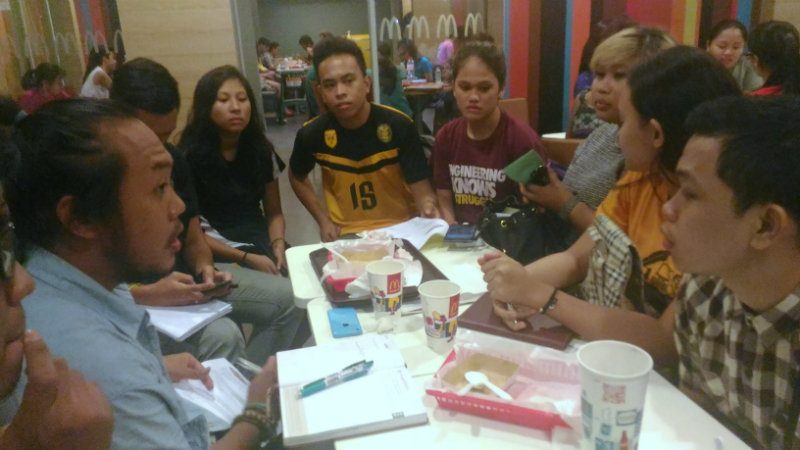 Facebook Twitter Copy URL
Copied
The Cebuano youth set the bar high for youth engagement in the upcoming elections. Will the rest of the Filipino youth follow suit?

CEBU, Philippines – On Wednesday night, March 17,  young Cebuanos – mostly students – gathered at a busy fastfood chain. In the middle of the noisy crowd, they talked about their common interests.

Unlike many people their age, they were not discussing the latest trending issue on Twitter nor the popular videos on Snapchat. Instead, they were tossing around their ideas on local politics.

Cebu mayoral, vice mayoral and congressional candidates are expected to meet and discuss their platforms on Saturday, March 19 – a day before the second Comelec-sanctioned presidential forum. (Read: Who’s running in Central Visayas)

Happening at the Little Theater Events Hall, the “Panaghimamat 2016: The First Cebuano Local Candidates Forum” is organized by no less than the Cebuano millennials who were meeting that night.

The people behind the local candidates’ forum come from 8 different youth groups in Cebu. According to lead convenor Jumjum Ouano, they only have two things in common: their interest in politics and being in the same age bracket.

“The Cebuano youth are politically aware and they are concerned [about] the upcoming elections,” Ouano said, adding that these reasons primarily fueled their desire to make the event a reality.

But what sets this particular forum apart?

Unlike other candidates’ forum, Ouano said the Panaghimamat 2016 will give equal  importance to the youth agenda.

“We all know this kind of events is usually organized by NGOs and CSOs and youth agenda is often left out,” he observed. Comprising 37% of the total electorate, voters aged 18 to 30 are challenged to make their voice heard in the upcoming elections. The Commission on Elections (Comelec) has repeatedly emphasized the power of the youth vote in making or breaking a candidacy, come May 2016.

In the Cebu city mayoral race, reelectionist Mayor Mike Rama of UNA is being challenged by former mayor Tommy Osmeña, the LP bet, while reelectionist Vice Mayor Edgard Labella of UNA is up against LP’s Nestor Archival.

The youth organizers identified 8 topics for the local candidates’ forum, the following 4 falling under the youth agenda:

According to the organizers, the local candidates usually dodged Cebu debates and forums. “They usually have this conflict when it comes to invitations. When the other candidate attends, the other will [decline] the invitation,” Ouano said in mix Filipino and English.

The challenge, then, is to prove that the youth can organize an activity and compel the candidates to present their platforms before the Cebu community.

Notwithstanding the great challenge that awaited them, Ouano and the rest of the young Cebuanos behind the forum pursued and engaged with the local candidates.

(Candidates should not only appear in the streets, handing out flyers and candies. They should also interact with the community to show their sincerity in carrying out the platforms they have been presenting to the electorate.)

The Cebuano youth have set the bar for youth engagement in the upcoming elections. It is time that the rest of the Filipino youth follow suit, Ouano said.

(I hope Filipino youth across the country will also try to organize political events because politics is not just for adults – it is also for the youth too.) – Rappler.com