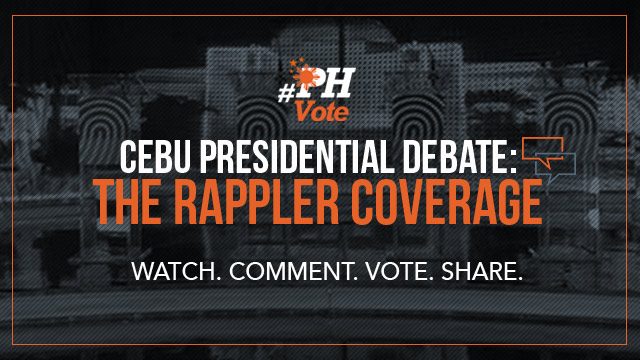 MANILA, Philippines – As candidates and their supporters head to Cebu City for the second presidential debate on Sunday, March 20, voters and netizens can tune in to Rappler on various platforms for an extensive, blow-by-blow coverage of the event.

Rappler will deliver to your computers, tablets, and smartphones the debate that will be held at the University of the Philippines-Cebu. It will feature candidates as they field questions from their rivals and the media panel.

This presidential debate in the Visayas is the second in a series organized by the Commission on Elections (Comelec). It partners with TV5 and Philippine Star for the 5-8 pm event.

Fast Facts: What you ought to know about Cebu and elections
The Scrum: Visayas voters keeping Roxas’ campaign afloat

Rappler’s teams in Cebu and Manila will provide breaking news, quick fact checks, expert commentary, and instant videos. We have rolled out an array of polls and social media executions that will allow readers and followers like you to join in the discussion wherever you are.

Starting at 3:30 pm on Sunday – more than an hour before the debate airs on TV5 – Rappler will start its live blog that will contain useful and relevant information that will help you assess candidates and better appreciate issues that will be tackled: disaster response and climate change, health care, education, women’s rights, and fighting corruption.

Our reporters in Cebu will bring you as close as possible to the debate venue as they capture candidates, supporters, viewers, people on the streets, and organizers as they come in.

On Rappler’s Facebook page, you can watch two simultaneous streams: one from the newsroom of Sun.Star Cebu, our partner in the coverage of the 2016 elections, and another from the Rappler headquarters in Pasig City.

Sun.Star editors Isolde Amante and Michelle So will talk to Rappler correspondent Ryan Macasero about the concerns of the Cebuano and the rest of Visayan voters, and how they expect candidates to address these.

In Manila, political communications expert and analyst Dr Clarissa C. David will talk about the debate topics in the national context, and how voters should measure the candidates based on these.

As soon as the debate starts, the live blog will pull in real-time updates from our reporters, alongside commentaries, context, and analyses by our editors and partner organizations. Instant fact checks of the candidates’ statements and claims will be provided by researchers, reporters, and editors.

The debate format will have a panel of journalists chosen from the Comelec’s media partners who will each ask candidates a question, and a segment where each candidate picks a rival to grill.

Readers and followers can make their sentiments known at every point in the debate in several ways:

After each round, Rappler will assess the candidates’ performance via:

Rappler will provide you with a same-night wrap of the highlights of the second presidential debate.

Let’s continue the conversation beyond Sunday. Stay with Rappler #PHvote – watch, comment, vote, and share – to understand the issues and help shape the vote on May 9, 2016. – Rappler.com