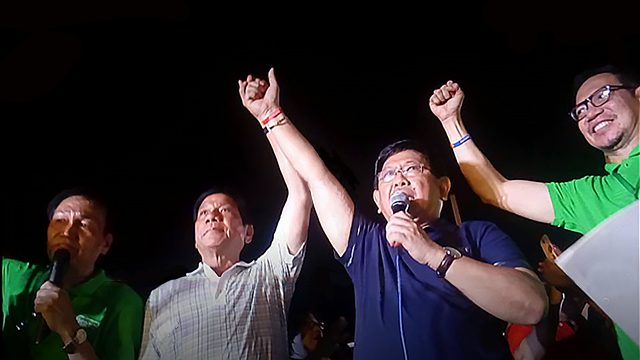 Pamintuan said this in response to Rappler’s question if he, along with his party mates in the local party, is endorsing Duterte for president.

Until Saturday, March 19, the same day Duterte attended the rally organized for him by his supporters here, Pamintuan used to dodge questions on which presidential candidate he would be supporting.

Last March 7, after former Candaba Mayor Jerry Pelayo told the media that Pamintuan was supporting Vice President Jejomar Binay and even organized 3 rallies for the United Nationalist Alliance (UNA) standard-bearer, the mayor refused to directly confirm or deny Pelayo’s statement. All he said was that he welcomes all national candidates in his city.

But on Saturday, Pamintuan patiently waited for Duterte at the rally site at Miranda Street here. Former city councilor Alexander Cauguiran, president of Partido Abe Kapampangan, served as the master of ceremony in the rally.

When Duterte arrived, Pamintuan stayed by his side until he raised the Davao City mayor’s left hand and declared him as the leader for genuine change, to the cheers of thousands who attended the political rally.

Pamintuan, who served various positions in the national government during the Arroyo administration, was reelected for his second term as mayor here under Partido Abe Kapampangan in 2013. He is running for his third term under the same political party against Senator Manuel “Lito” Lapid of Lingap Lugud party and Vice Mayor Vicky Vega Cabigting, an independent candidate.

Angeles City has about 150,000 registered voters.

Some political observers here believed that Pineda and Pamintuan would support the same presidential candidate, as the two usually cooperate with each other in their political decisions and activities.

Both ran under the Lakas-Christian Muslim Democrats party in 2010 but after Liberal Party standard-bearer Benigno Aquino III prevailed in the presidential election, they both organized and headed their respective local political parties – Pamintuan’s Partido Abe Kapampangan and Pineda’s Kapanalig at Kambilan ding Memalen Pampanga.

Though Angeles City is highly urbanized and politically independent from the province of Pampanga, Pineda supported Pamintuan’s reelection bid in 2013 against the influential Nepomuceno and Lazatin political clans here.

But now the two reelectionist local chief executives are supporting different presidential candidates. Pineda declared her support for the Liberal Party’s Manuel Roxas II during President Aquino’s visit to the provincial capitol in San Fernando City last March 17, while Pamintuan is now standing tall in his declaration of support for Duterte.

Roxas and Duterte are known to despise each other.

In his Facebook post on March 17, Pamintuan shared a video of Duterte’s recent big rally in Davao City – an apparent prelude to endorsing the latter’s candidacy. – Rappler.com