Roxas, Duterte, Poe ‘gang up’ on Binay in debate 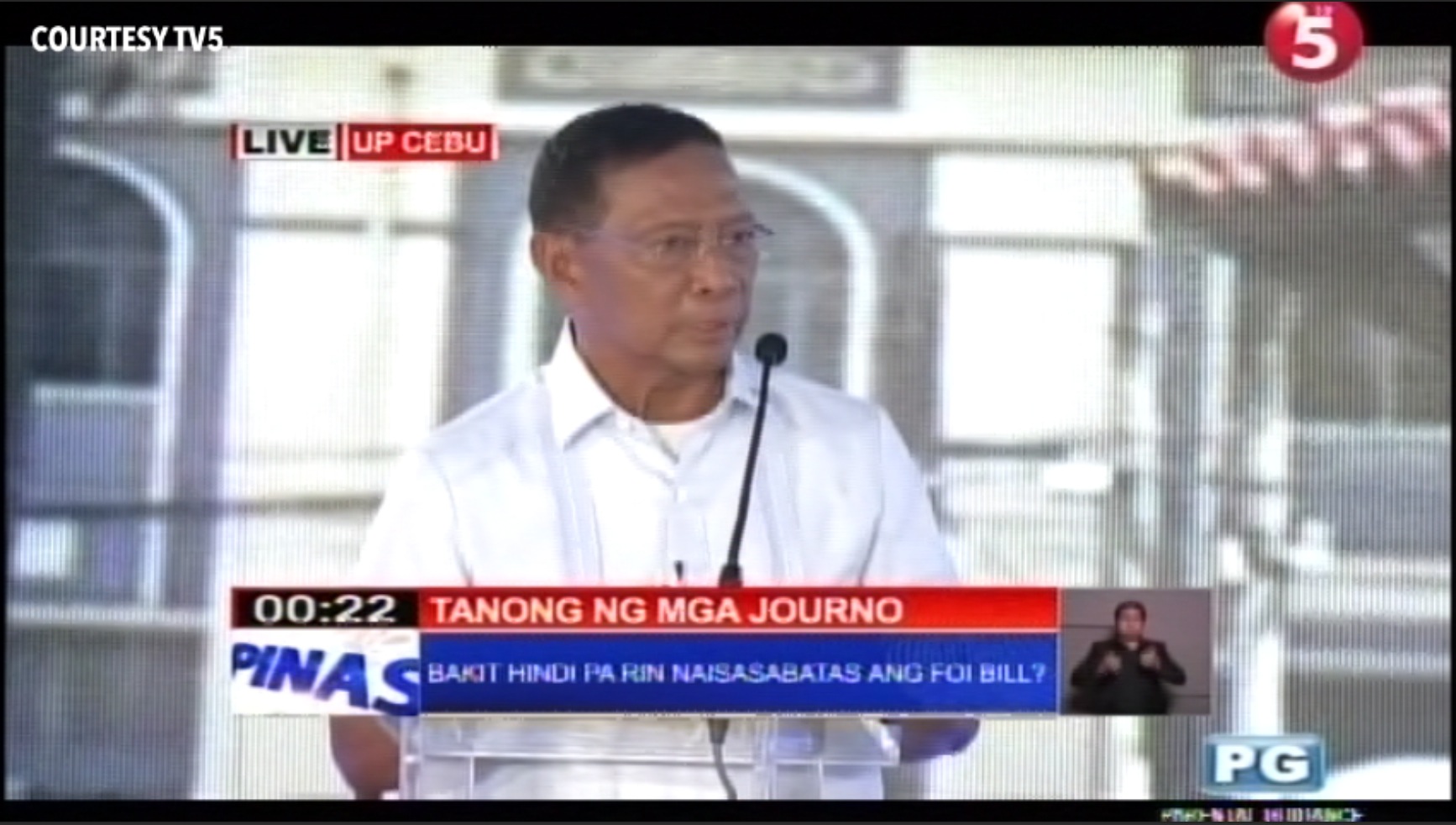 “Wow, they’re all ganging up on Binay,” university professor Rowie Azada Palacios said on Twitter as TV5 aired the presidential debate from Cebu.

The criticisms against Binay revolved around the Freedom of Information (FOI) bill as well as the Vice President’s reported violation of debate rules.

Binay said that if he assumes the presidency, he will immediately issue an executive order on FOI.

(That’s nice to hear, but with all due respect, VP Binay, we have many questions for you that you don’t answer in the Senate. How will we believe that you will support the Freedom of Information bill?)

Later, Poe dared Binay to sign a waiver to allow authorities to look into his bank accounts.

Binay proposed that all candidates should sign this waiver to allow lifestyle checks. Duterte gestured that he is willing to sign the waiver on the spot.

When Binay browsed through his documents, TV5 news chief Luchi Cruz Valdes reminded Binay that he Commission on Elections (Comelec) prohibits notes during the debate.

“With all due respect, I have to tell you we will abide by the Comelec rules that there will be no notes during this debate,” Valdes said.

“Kung ang bawat isa sa atin ay nais pumirma ng kahit anong waiver matapos ito ay sa labas po ay puwede nating ipakita kung anong waiver ang pipirmahan natin,” Roxas said. (If any of us would like to sign any waiver after this, we can show outside whatever waiver we will sign.)

After Roxas spoke, Valdes reiterated the rules to Binay.

Binay told Valdes: “It’s not a note, it’s a document. Excuse me.”

Duterte then spoke as Binay was browsing through his documents. The Davao City mayor referred to Binay’s cases before the Commission on Audit (COA) and the Ombudsman, as well as allegations against him by Binay’s part, the United Nationalist Alliance (UNA).

“I’d like to be very, very brutally frank to the Vice President,” Duterte said.

(Sir, you have many cases before the COA as well as the Ombudsman. That’s public knowledge. And as for me, UNA is saying I have a case of technical malversation. My question is… let’s sign that, then if I have a case, we will withdraw from the presidential derby.)

The debate is ongoing as of posting time. – Rappler.com