Rule on documents: Who missed what in Cebu debate meetings

Mar 21, 2016 9:35 AM PHT
Mara Cepeda
Facebook Twitter Copy URL
Copied
The camp of Vice President Jejomar Binay says they should not be criticized for asking whether documents are allowed onstage 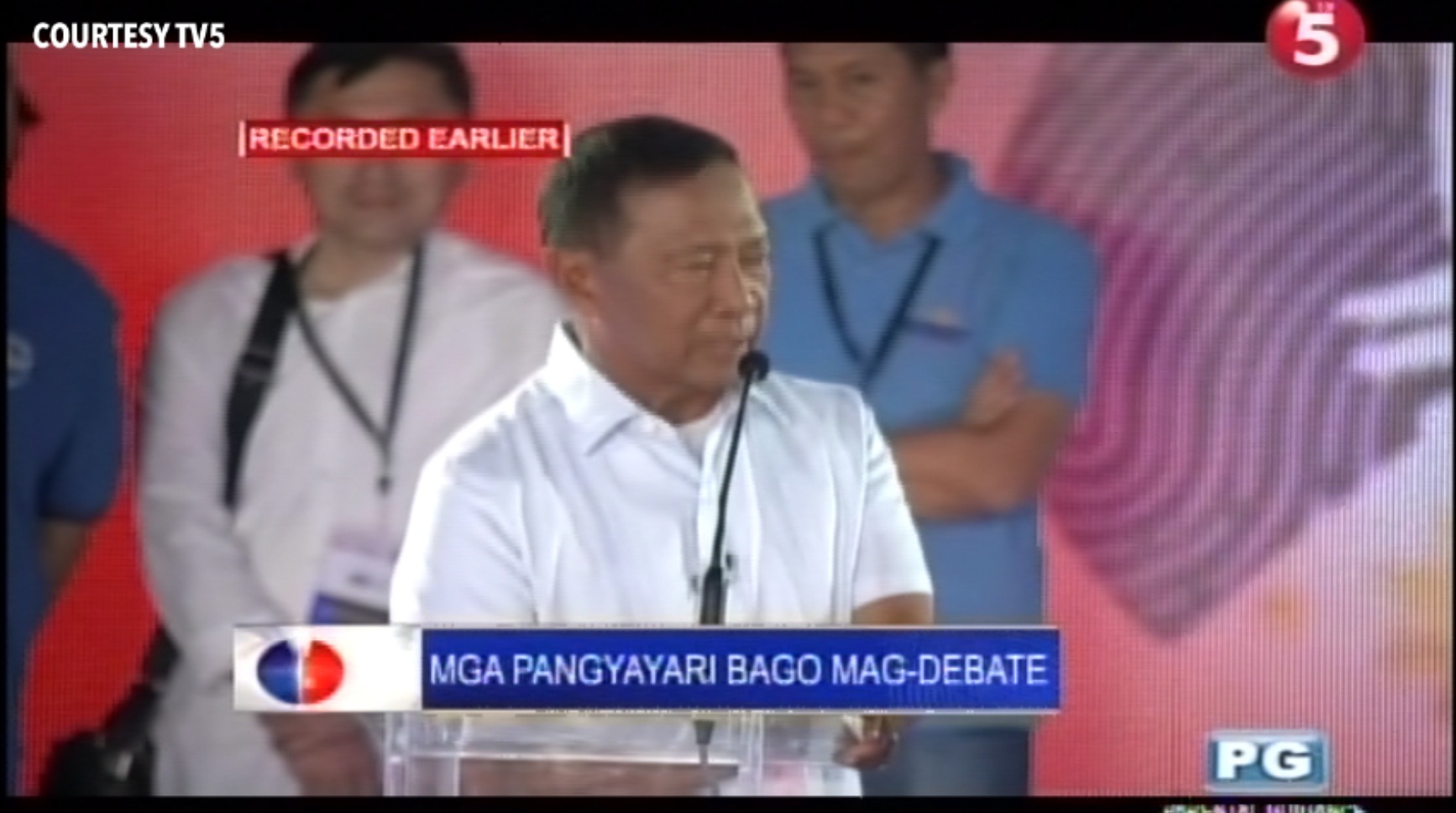 Commission on Elections (Comelec) Chairman Andres Bautista reiterated the agreed upon rule prohibiting candidates from bringing cheat sheets onstage as confusion on the guideline arose before the start of the second presidential debate on Sunday, March 20.

Davao City Mayor Rodrigo Duterte, Liberal Party standard-bearer Manuel “Mar” Roxas II, and Senator Grace Poe questioned why Vice President Jejomar Binay brought documents to his podium for the debate, delaying the program by an hour and a half.

“From the beginning, you can have notes when you’re in the backstage. You can even consult with your advisers in between breaks. But you cannot bring notes to the podium. Those rules are clear in the first debate. Those are the rules in the subsequent debates,” said Bautista.

This was contrary to the instructions given by TV5 head Luchi Cruz Valdes to Binay’s camp, who had asked her if the Vice President could present public documents during the debate proper.

Valdes admitted that she gave the go-signal without knowing the standing rule against cheat sheets, a move Bautista assessed to be “wrong.”

“I think it is also clear that when the camp of the Vice President asked TV5 whether or not they could bring notes, TV5 made the wrong advice that they could and that is where we are right now,” he said.

“So the VP had practiced in the last two weeks under the assumption and under the diligence of the team to clarify with her and she did say it was allowed,” Remulla explained.

Binay himself said he does not see any difference if he would be allowed to use the documents.

(What’s the difference? They did not prepare with notes, while I did, believing I am allowed to bring documents. I’ve been here since Friday. I brought documents I want to present. My explanation would be better if there would be documents.)

But the Vice President was eventually barred from citing information from the documents he brought.

TV5 co-organized Sunday’s debate together with the Comelec, The Philippine Star, the Kapisan ng mga Brodkaster ng Pilipinas, and the University of the Philippines (UP) Cebu. 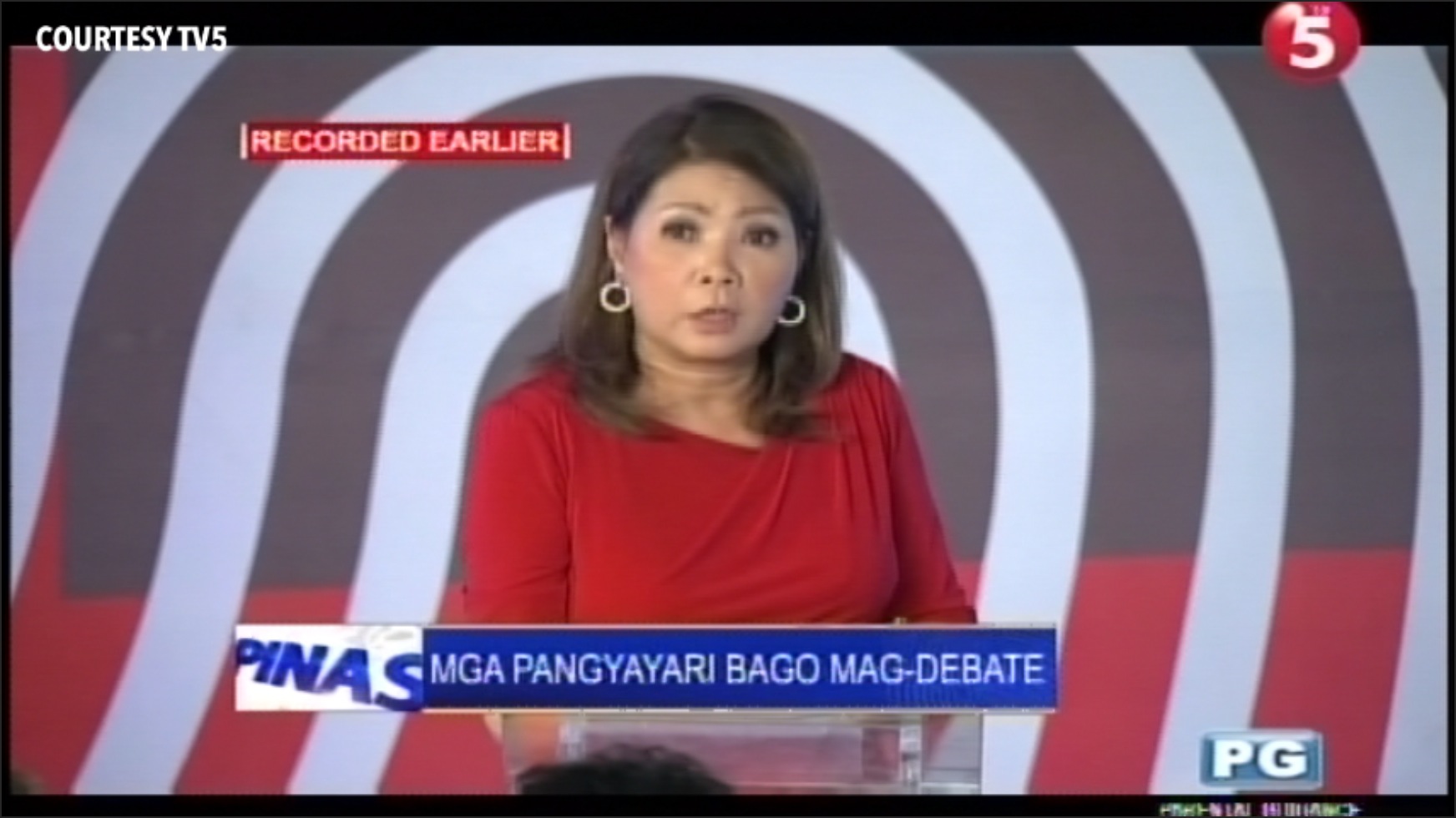 Why didn’t the Binay camp make clarifications with the Comelec?

UNA president and Navotas Representative Toby Tiangco told Rappler this is because the poll body’s chairman left before him during the last meeting when guidelines were being finalized for the Cebu debate.

“[I asked her because] how can the moderator not know the rules?” he added.

According to Tiangco, the Binay camp had requested TV5 to send them an e-mail containing the rules and format for the debate.

Tiangco said he then gave Valdes a call when he noticed there were no guidelines on whether or not candidates would be allowed to bring documents. The TV5 official said yes.

“So we planned based on what they said. So why should it be taken against us that the others didn’t ask? Is it our fault that we are diligent in checking the guidelines of TV5?” said Tiangco, who clarified they have no ill feelings toward the debate organizers over the rule confusion.

Binay’s son, dismissed Makati Mayor Jejomar Erwin “Junjun” Binay Jr, also told reporters that the Vice President planned to use the documents to dismiss the corruption allegations against him. 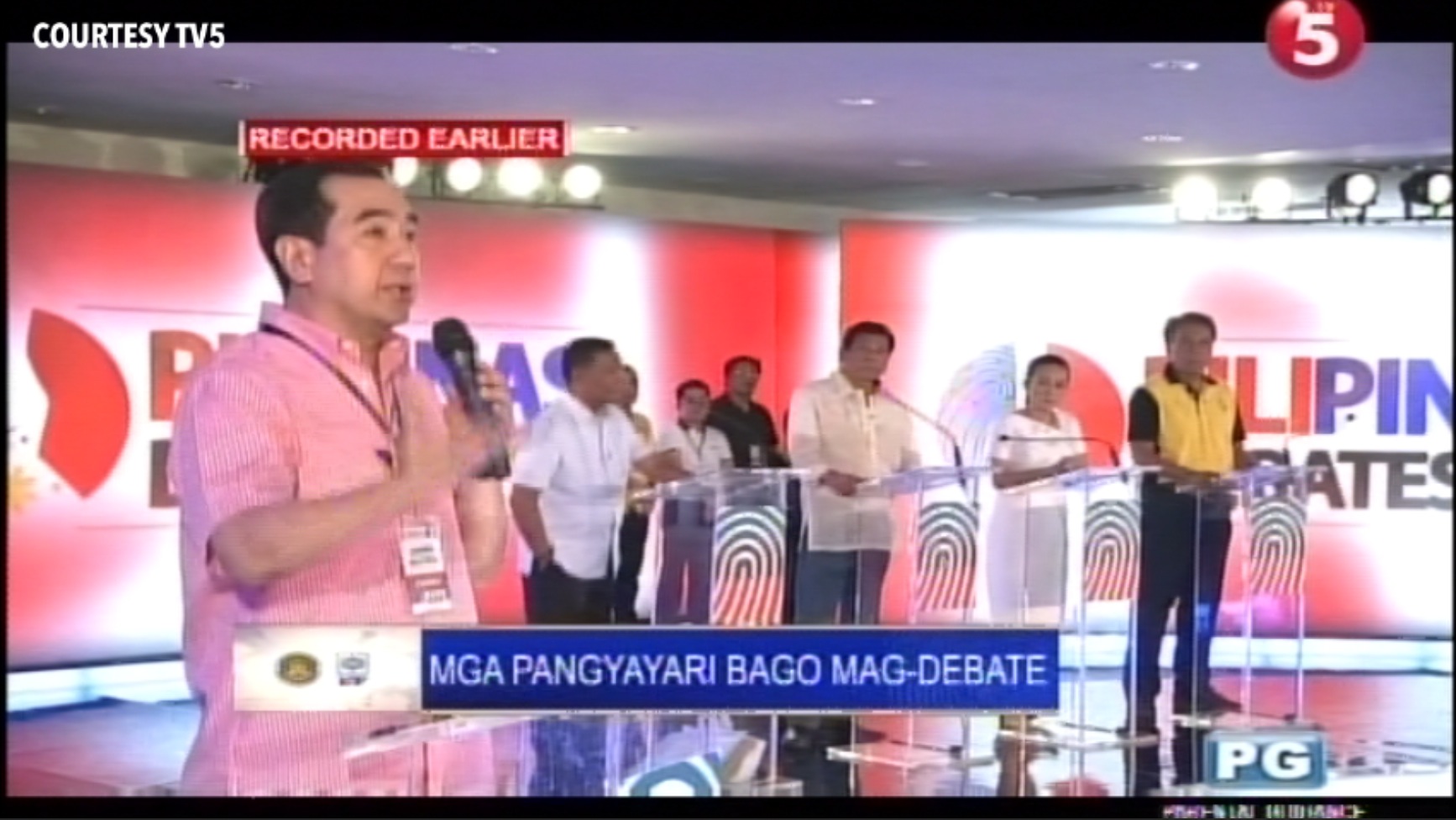 Other bets say ‘no’

But the other candidates did not buy it.

Roxas said the rule against cheat sheets had been agreed upon for a long time already.

“This is being held under the auspices of the Comelec. Hindi ito ‘yung kodigo o hindi. Ang issue dito: are we a rules-based society or not? May patakaran ba tayo?” asked Roxas.

(This is being held under the auspices of the Comelec. This is not an issue about cheat sheets. The issue here is: are we a rules-based society or not? Do we have guidelines?)

(Because if not, we would end up following our own rules. That’s the reason why our country is not progressing: people have their own rules and interpretations.)

Duterte, for his part, said he does not take issue with Binay presenting documents to the public per se.

“The problem is, it is your document, and if you confront us with that document, we are at a loss if it’s authentic or not,” said Duterte, who is a lawyer like Binay.

Poe said it was never raised during the pre-debate meetings that candidates could bring documents, but said Binay should just be allowed to use them so he could properly explain.

(Let’s allow him because our countrymen need to know his position. But for me, we complied with what is right. Let’s give him the chance to expound and let the people judge.)

The survey front runner, however, said Binay’s pre-debate actions are telling of his possible performance if he wins as president.