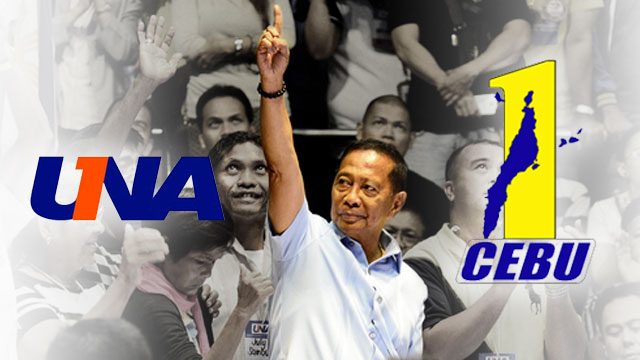 Facebook Twitter Copy URL
Copied
'One Cebu entered into an alliance with UNA out of loyalty, but recent events showed that UNA did not appreciate nor reciprocate this loyalty'

LAPU-LAPU CITY, Philippines – The One Cebu Party, led by the province’s influential Garcia clan, cuts its ties with Vice President Jejomar Binay and the United Nationalist Alliance (UNA), barely over a month after their alliance for the upcoming May 9 polls was sealed.

“After thorough deliberation, we in One Cebu are unanimous in our decision to break away from our alliance with UNA and presidential candidate Jejomar Binay,” Cebu gubernatorial candidate and former Government Service Insurance System (GSIS) chairman Winston Garcia said in a statement on Monday, March 21.

“One Cebu entered into an alliance with UNA out of loyalty, but recent events showed that UNA did not appreciate nor reciprocate this loyalty,” Garcia added.

He mentioned in the press conference that while One Cebu is dropping Binay and his slate, individual One Cebu members are free to endorse whoever they like.

During Binay’s sorties in Carcar, Argao, and Talisay last Friday evening, March 18, there were no One Cebu members present.

Cebu 3rd District Representative Gwendolyn Garcia is still a member of UNA, and has said that she will continue to support Binay for the presidency.

It was only last February 2 when the two parties pledged to support Binay’s campaign. The two parties were also allies during the 2013 elections.

“It’s just a clash of priorities. UNA and Cebu have different priorities,” Winston told Rappler in an interview.

He added: “The priority of UNA is to let Binay win. Our prioity is also to let our candidates win. When we entered into a partnership, we thought it was a partnership that is mutually beneficially to both of us.”

Garcia said one factor that led to breaking ties with UNA is when they held rallies in Cebu, One Cebu members were not invited to participate.

In a separate press conference in Cebu on Monday, Binay said that “there are gains and there are losses” in losing One Cebu’s support, but he did not elaborate on what these were.

When asked about not inviting One Cebu to UNA rallies, he said he would not discuss something that’s “water under the bridge.”

After news of the dissolution of the One Cebu and UNA alliance broke, Cebu’s 5th District Represenative Ace Durano, who is also presidential candidate Grace Poe’s campaign manager, told ABS-CBN News that he was in talks with One Cebu to ask for support for Poe. Garcia told Rappler, “That’s a complete lie.”

As for Binay, he said that despite the loss, the promises he made to Cebu in like more infrastructure funding and re-opening the Malacañang sa Sugbo remain.

UNA spokesperson Toby Tiangco told Rappler in a text message: “As public servants, the welfare of the people should be the number 1 priority. We wish Winston Garcia all the best and hope for his victory, because we believe that his victory will be good for the people of the province of Cebu.”

In terms of votes, Cebu is the largest province, with more than 2.7 million registered voters.

Binay lost Cebu during the 2010 elections, when he ran for vice president against Manuel “Mar” Roxas II of the Liberal Party, getting around 400,000 votes versus Roxas’ more than 1 million votes. – With reports from Mara Cepeda/Rappler.com