Cebuano students to presidential bets: Why the mudslinging?

Mar 21, 2016 7:03 PM PHT
Rappler.com
Facebook Twitter Copy URL
Copied
The candidates should have just focused on the issues set for the debate, they say

CEBU CITY, Philippines – The presidential candidates square off for the second time at the University of the Philippines, Cebu.

Cebuano students are not impressed. 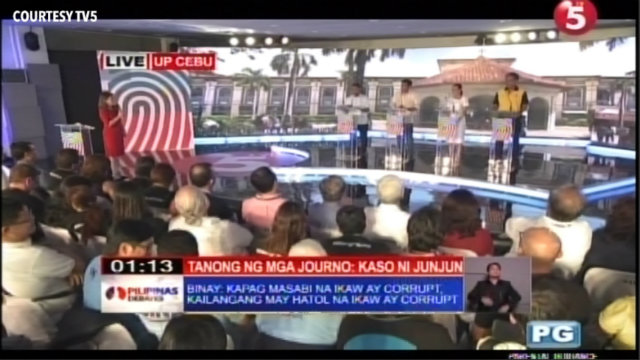 They say be careful what you wish for because you just might get it. Here in Cebu City, Filipino voters got the heated presidential debate many have been clamoring for.

The students say they expected more from the presidential hopefuls.

KLEN QUIÑANOLA, UP STUDENT: There was very much mudslinging and you can see from the audience inside the Performing Hall itself that the audience was entertained. Although we were entertained because Pinoys actually liked mudslinging, but in the essence, that’s not the essence of the debate. I would expect in the debate in Luzon that it would be eradicated already.

For this political science student, the candidates should have just focused on the issues set for the debate: climate change, disaster management, women’s rights, health, and corruption.

MOIRA MANUEL, UNIVERSITY OF SAN CARLOS STUDENT: They went away from the issues and they attacked on personality, and it was not issue-based. Personality attacks and mudslinging does really nothing to educate the people and to improve the political culture here in the Philippines.

There’s also disappointment that some of the set issues were not discussed at all.

KARINA LIPARDO, CEBU INSTITUTE OF MEDICINE STUDENT: We really were excited about platforms about health. Especially because candidates have said before that they want better access to health care. But what does that actually mean for them? What are the concrete plans they have to achieve this?

Another issue is the almost two-hour delay of the debate over clarifications if candidates are allowed to bring notes or documents on the stage.

TV-5 news head Luchi Cruz Valdes admitted she mistakenly gave Binay the go-signal to bring documents when there is a standing rule against any form of cheat sheets.

KARINA LIPARDO, CEBU INSTITUTE OF MEDICINE STUDENT: We required to be here early and we were here since 10 am and so we expected it to start on time. And that delay really affected us especially us students who have other things to do like study.

Candidates also kept on talking over each other.

Despite the shortcomings, students say the second presidential debate is much better than the first leg in Cagayan de Oro. Will the Luzon debate be the best among the 3?