Mar 22, 2016 8:00 AM PHT
Facebook Twitter Copy URL
Copied
The presidential bet says she only signed a committee report so that a consolidated bill could move forward for deliberation: 'Wala pang bill' 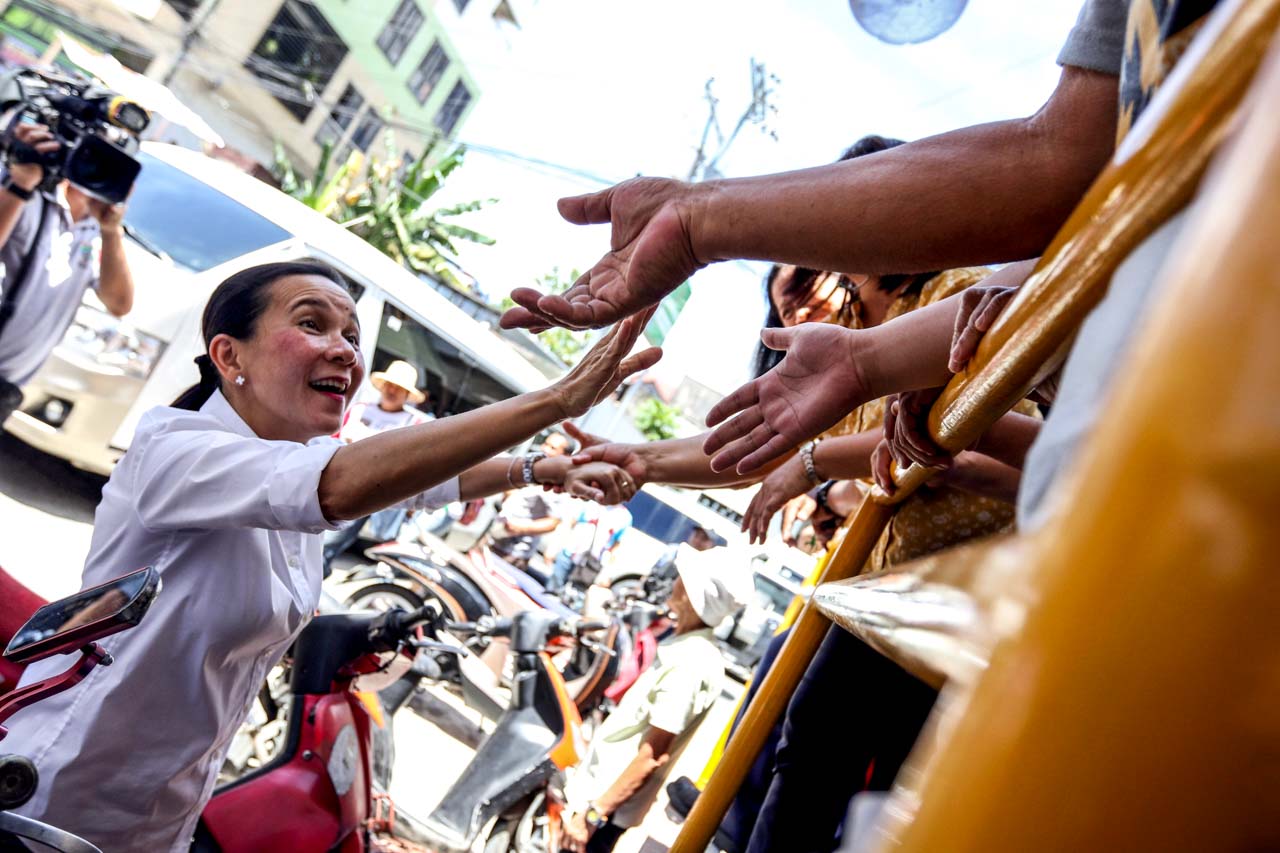 MANILA, Philippines (UPDATED) – Presidential bet Grace Poe stood by her statement in the 2nd presidential debate that she did not sign the bill seeking to distribute coco levy funds to farmers, saying she only signed the committee report so the bill would move forward.

Poe is being called out for that statement, after a post circulating on social media alleged that Poe was being untruthful, as she supposedly signed the bill. As of posting time, the post was shared almost 4,000 times.

Poe is facing criticisms over her alleged defense of businessman Eduardo “Danding” Cojuangco Jr, who was among those behind the coco levy fund scam – the misuse of taxes imposed on coconut farmers – in the 1970s and 1980s. Cojuangco is a known supporter of Poe. (READ: NPC: Grace Poe is our presidential bet)

Poe earlier admitted she is renting or borrowing private aircraft from Cojuangco’s San Miguel Corporation, but assured the public she would not grant favors to her campaign supporters. (READ: Grace Poe is not Danding’s ‘puppet’ – Chiz)

(In fact, the Supreme Court had a decision on the how to release the funds. But our government had its own idea on how to use it instead of giving it directly to coconut farmers.)

It turned out, the law needed for the High Court decision to be implemented was passed by the House of Representatives but not by the Senate, of which Poe is a member.

Critics said Poe is therefore accountable for the non-passage of the measure in the Senate.

The senator denied this.

The senator is also getting flak for saying in the debate that she is only a member of the committee. Poe is the vice chairperson of the Senate committee on agriculture.

While Poe said she did not sign the coco levy bill, Senate records show, and she admitted, that she signed Committee Report Number 106 “recommending” the approval of Senate Bill 2675 as the consolidated version to be deliberated upon by senators.

Before the Senate approves a bill on final reading, it has to undergo 3 readings first. At present, the coco levy bill is still in the 2nd reading or the period of amendments.

Poe, therefore, signed the committee report on the bill that seeks to mandate several government offices to manage coco levy funds for coconut farmers – the same mechanism she criticized in Quezon as she said she wanted the funds be directly given to farmers.

But that does not mean she agreed with the measure, she said. Poe asserted she only signed it so the process could move forward.

In past instances, however, Poe’s signatures in committee reports – the recommending of plunder charges against Vice President Jejomar Binay and the Mamasapano probe – signified her approval of them. If she had reservations or intentions to amend a measure, just as in the substitute Bangsamoro Basic Law, Poe clearly indicated it by putting a note beside her signature – a common practice among senators.

But out of all the signatories of the said report, only Senator Vicente Sotto III clearly expressed his intention to question the measure by putting the words “to interpellate” beside his signature.

Senators also have the option of not signing the report at all, especially if they oppose it.

(There are those for amendments, right? For me, I should have… Usually, when you sign, that means you are lining up to interpellate, that you have amendments to the report.)

During Sunday’s debate, Poe reiterated that the questionable fund is no longer with Cojuangco, as it was already given to the government.

She said she did not sign the bill because she wanted to ensure that the funds would indeed go to coconut farmers and their family, which SB 2675 and the committee report are seeking to do.

(Now, this measure is still being debated in the Senate. I did not sign it for the simple reason that farmers should have representation.)

(It is clear that these funds are no longer with Danding Cojuangco. Even if it were with him, I would be fair whether or not you helped me.)

Despite the noise and confusion, Poe stands by her earlier statement. Technicality dictates she could not sign a bill’s approval because it has not yet passed all the stages required: “Sasabihin sa akin, ‘Pinirmahan mo na ‘yung bill’ eh hindi pa nga natatapos ‘yung deliberasyon.’”

(They would tell me, “You already signed the bill when deliberations on it are not yet done.”)

She said she was just being careful in labelling the measure as a bill because what she signed was only a part of the process, a committee report.

(That bill is not yet done. The deliberations are not yet finished. But, you know, if you will look at Senate records, I am for our farmers. The first resolution by the 16th Congress was for coconut farmers, which I filed. I am careful in saying there is already a bill because it is just a committee report.)

Poe said she already asked for her name to be included in the list of interpellators. It is unclear, however, if the chamber could still decide on the measure because time is running out. They are set to resume session on May 23 but mainly for the national canvassing of votes for the 2016 presidential elections.

The coco levy bill, among the priority measures of the Aquino administration, was only passed by the House of Representatives. – Rappler.com