PAMPANGA, Philippines – It’s an alliance that only a few years back would have seemed impossible.

Pineda was a staunch ally of former president Gloria Macapagal Arroyo, the immediate predecessor of Aquino. In his speeches from the start of his presidency in 2010 to now, Aquino has not been shy in lambasting Arroyo, whose presidency was plagued by corruption allegations.

Back in 2013, Pineda ran against then LP bet Ed Panlilio, who lost by a landslide.

Not only that. Pineda’s husband, Rodolfo “Bong” Pineda, is an alleged gambling lord and was investigated in the past for his known links to the illegal numbers game jueteng. (READ: Bong Pineda: From runner to kingmaker)

A 2001 Newsbreak report describes Bong Pineda as a “reported lord of jueteng” who “gained nationwide notoriety because his alleged operations had corrupted and harmed no less than the institution of the presidency.” 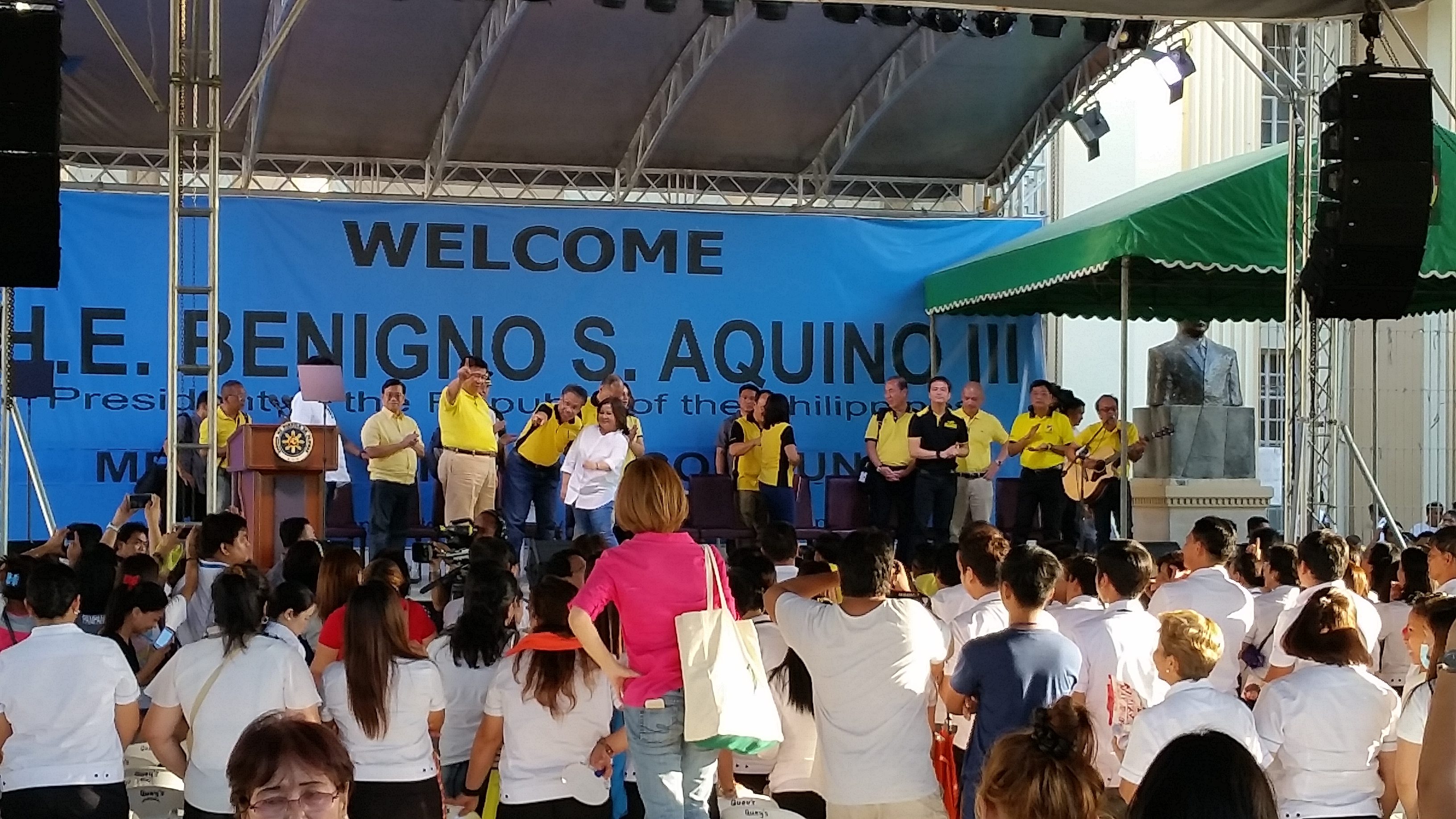 “Through the years, Pineda has built a strong psychological dependence on him by helping the poor. One time, he even provided Lubao’s barangay captains, all 45 of them, with brand-new handguns. It is said that he and his mayor-wife have chosen not to build hospitals because, once they do so, people will stop lining up to ask for their help. The Catholic hierarchy has also been the object of his generosity. Pineda gave priests who once concelebrated a Mass for his birthday envelopes that each contained P15,000. Not all accepted the envelopes, however.” (READ: Gambling on politics)

Ironically, Robredo’s husband, the late Jesse Robredo, waged war against jueteng when he was Naga City mayor and later, as interior secretary.

Both Roxas and Robredo downplayed the issue.

(Maybe that’s a thought for malicious minds. As far as we’re concerned, they’ve not asking for anything in return. This is all about service, Governor Pineda herself has said she likes the service here in Pampanga, in all towns and cities in Pampanga so we accept her support.) (We’re not allied with her because of links to jueteng. We welcome her support because she’s been recognized even by experts because of the good she’s done in Pampanga when it comes to delivering basic services. She is one of the LGU officials whose performance we admire.)

(Should her service be overshadowed by stories on jueteng? It shouldn’t because she’s not asking anything from us in return.)

Both Roxas and Robredo praised Pineda’s performance as governor. The duo were in San Fernando City on Tuesday, during a gathering of provincial scholars at the Bren Guiao Gym.

Cheques were handed out to students during the gathering, but local officials were quick to point out that there was “nothing political” about the event

A provincial board remember reminded students to study the candidates diligently, listen to their parents and, he added, their current governor.

There’s also the tricky situation of the Pinedas’ political relationship with the Lapids, another political family from Pampanga. Former governor Mark Lapid is part of the LP-led coalition’s senate lineup but his family is estranged from the Pinedas. Pineda and Lapid never shared the stage during the LP campaign in the province. Pineda appeared during a gathering in the Bren Guiao Gym, and Lapid during rallies in the San Fernando Heroes Hall and in Candaba.

Pineda isn’t the first former Arroyo ally to declare their support for the ruling party.

This has been a common line from Roxas, who served as Aquino’s transportation and later, interior secretary, although it’s a claim his political rivals refute.

(Maybe they appreciate that we’re fair when it comes to service and infrastructure in all parts of Pampanga and the entire Philippines.)

The national government has poured in over P16.9 billion into the province since 2011, mostly for infrastructure and flood mitigation projects.

The official campaign period for local bets begins next week.

With their far from impressive numbers, both Roxas and Robredo will need the support of allies in towns, cities, and provinces to boost their chances on May 9.

This much, Roxas highlighted in a chance interview with media.

(It’s good news. That means the race is getting tighter and after Holy Week, the local campaign begins and I think we have the upper hand there because a lot of our allies believe in Daang Matuwid.)

In the Central Luzon region, which Pampanga belongs to, Roxas ranked third among presidential bets, according to a recent Laylo survey.

Both Roxas and Robredo have suffered low numbers in vote-rich Metro Manila and nearby Luzon provinces.

Roxas won in the province when he ran for vice president in 2010, getting more than 413,016 votes compared to Binay’s 220,357. Aquino also won here in 2010, but was trailed closely behind by Arroyo’s anointed bet Gilberto Teodoro Jr. – Rappler.com