How to win Cebu: Roxas leans on mayors, Aquino allies 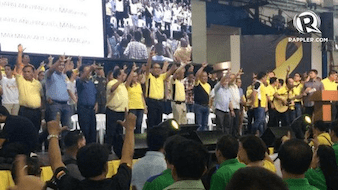 Facebook Twitter Copy URL
Copied
Although Mar Roxas has not topped the surveys, his wife, broadcaster Korina Sanchez, says that he remains a formidable candidate because of several factors

CEBU CITY, Philippines – Most mayors in Cebu remain with the Liberal Party (LP), and this is what allies of presidential candidate Manuel “Mar” Roxas II believe will help him win again in the country’s most vote-rich province.

At the cost of losing some original allies, the LP has accepted the support of groups like Alayon in the province’s first district, led by former congressman and Talisay City mayoral candidate Eduardo Gullas.

But Roxas’ supporters say that the LP isn’t just relying on their allies among incumbent officials in the towns and cities.

Most of the local volunteers for President Benigno Aquino III in the 2010 elections – a group that included lawyers, teachers and business owners – are now identified with the Cebu Volunteers for Mar and Leni (CMVL).

Lawyer Democrito Barcenas, a former Integrated Bar of the Philippines Cebu Chapter president and an ex-vice governor of Cebu, said the group is supporting Roxas because they want programs under “Daang Matuwid” to continue.

The CVML has its headquarters in Manrose Plaza on General Maxilom Avenue, Cebu City, on the same street and just a few blocks away from the LP Cebu headquarters in River Gate Complex.

In their campaign rallies so far in the cities of Mandaue, Lapu-Lapu, and Toledo, and in the towns of Daanbantayan and Dumanug, Roxas and his vice presidential candidate, Camarines Sur Representative Leni Robredo, have emphasized continuity as their main promise.

They have promised to expand the conditional cash transfer program, which the Aquino administration also continued, with modifications, from Gloria Arroyo’s presidency.

Mayor Valdemar Chiong of Naga City said that despite criticisms that economic growth has not reached the grassroots, he expects Roxas to win in the province’s first district because of the cash transfer program (known as the Pantawid Pamilyang Pilipino Program) and the expansion of health insurance coverage under PhilHealth.

Abing said that the LP is hoping Roxas’ survey ratings will improve with the help of influential allies like Gullas in the first district; the Caminero and Gica clans in the second district; the Yapha and Sanchez supporters in the 3rd; the Martinezes in the 4th district; the Cortes, Quisumbing, and Alegado camps in the 6th district; and the Calderons in the new 7th district.

Also allied with Roxas in Cebu are the Radazas of Lapu-Lapu City and the Osmeñas of Cebu City.

Roxas was tied with Binay, with 20% of respondents each, in the March 1 to 6 survey of Pulse Asia. Still in the lead was Senator Grace Poe, with 28%, followed by Davao City Mayor Rodrigo Duterte, with 24%.

Although Roxas has not topped the surveys, his wife, broadcaster Korina Sanchez, said that he remains a formidable candidate because of several factors: President Benigno Aquino III’s endorsement and support; his achievements and track record; his freedom from allegations of corruption; and the LP’s machinery from Malacañang down to the barangays. – Rappler.com